DACA benefits: Efforts hiked to boost sign-ups by undocumented Filipinos and others 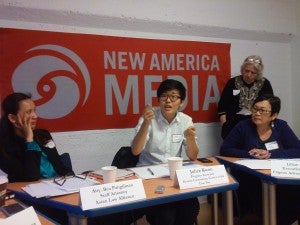 SAN FRANCISCO – Civil rights and community organizations ramped up efforts to get the word out on the benefits of the Deferred Action for Childhood Arrivals (DACA) immigration program and get intended beneficiaries to avail of its good intentions and actual benefits.

Low enrollment rates in the Filipino and Korean communities have prompted the International Institute of the Bay Area (IIBA) and the Bay Area DACA Collaborative to hold a briefing for ethnic media at the New America Media (NAM) offices here.

Latest figures show that from the estimated number of undocumented Filipino and Korean immigrants, only around 25 percent of those eligible for DACA have applied for the program almost three years after it was first announced.

The 2012 Obama-initiated program temporarily protects undocumented immigrants (of up to 30 years old) who came to the U.S. before their 16th birthday by granting them work authorizations, social security numbers and, for those qualified, education and health benefits provided they are in school, or have graduated (or have completion certificates from) high school, or rendered U.S. military service. DACA is renewable every two years.

The number of undocumented Filipinos in the state ranges from 79,000 (University of Southern California study) to 89,000 (Migrant Policy Institute figure), with 27,000 staying in the San Francisco Bay Area according to the 2013 American Community Survey. 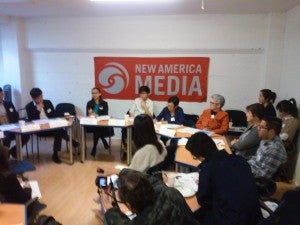 San Francisco Bay Area figures of DACA Collaborative also show that of the 45,000 eligible DACA recipients, 66 percent or 30,000 have applied while still a significant 15,000 have not.

At the NAM briefing after giving the latest figures on the DACA program including the temporary hold on its expansion Atty. Bea Pangilinan of the Asian Law Alliance assured that the DACA program continues despite a Texas federal judge’s injunction temporarily blocking people from applying. He based his decision on procedural issues, not on the merits of the case.

In an interview with INQUIRER.net, Pangilinan strongly urged those who are eligible to apply.

”We’ve been working on DACA since 2012 when the President first announced it. In fact, many of those who first availed have had their benefits renewed,” Pangilinan explained.

“We’ve probably filed around 400-500 cases and did about 1,000 or so consults.  By far, the clients we’ve had for DACA are mostly Latino.  We’ve had I would say only a handful of Filipino clients,” Pangilinan added.

Pangilinan was confident that “a lot of young Filipinos who are DACA-eligible would be aware, especially if they’ve attended schools in the US. However, not everyone still applies.

Perhaps, Pangilinan said, they have a “wait and see” attitude since the program is temporary.  They might also be scared to come forward and some might also not have the family support that they need to push them to apply because of our concept of ‘hiya’ (shame).  I haven’t seen the willingness to speak out like I see among our Latino clients.”

She cited an instance when a DACA client granted an interview with the Mercury News but then asked the paper not to publish the interview. There was also a Filipino parent who did not show up at a press briefing last week after initially agreeing to speak.

However, a Filipino DACA recipient, “Juanito” from Taytay, Rizal, attended the NAM briefing this time and talked about the problems he had before DACA and the benefits he now enjoys after availing of it.

Juanito added: “A complete turnaround happened after DACA. I was able to apply for a job and go after opportunities that are out there currently working with TESLA materials, something that would not have been possible without DACA.”

Juanito can also now drive and run errands and help out the family with the income he is now getting and can now even take his parents out to lunch.

He thanked API Legal Outreach staff attorney Maria Segarra, who encouraged him to apply for DACA after nothing much was heard about it at first and disinformation about the program further scared intended beneficiaries like him.

Now he estimated an 80 percent rate of participation among his relatives, friends, classmates and co-workers, most of whom were able to get the right information and consult with the right people who could truly help them.

“Personally, I know some persons who are not ready to come out to avail of the program because of the stigma that comes with being undocumented and, therefore, a second-rate citizen; especially if the solution to their immigration problems they feel is out of their hands,” admitted Juanito.

“We need not perpetuate fear and the negative things. Sometimes it (the information coming out there) is completely false, completely inaccurate or may not really the whole story,” said Segarra.

“Don’t push our communities down by making them afraid. The goal of this conversation is to empower people by connecting them to resources. There are free clinics and other legal sources where you don’t have to pay a penny. And the conversation with attorneys and IIBA representatives are confidential. We may need to be careful. Balance that careful approach with empowerment. Partner with nonprofit like our group. API Legal Outreach,“ Segarra exhorted.

She added that there are many legal service providers that help DACA applicants for a low fee or free of charge.

Private lawyer Christopher Relos of Tancinco Law Office agrees that correct and adequate information to combat falsehood about DACA will greatly help people to come out and avail of it.

“Although DACA has been well covered in the media, I suspect that many potential applicants do not have enough clear information to make an informed decision,” Relos explained.

“Whether or not to apply for programs like DACA is a crucial decision each person has to carefully make for himself or herself, but potential applicants should first have the right information that they need about the risks, benefits and procedures to make a choice or at least think carefully about it, and also access to licensed persons or genuine organizations that they can trust if they need help or guidance.”

“The culture of shaming of the undocumented,makes them afraid of coming out and talking about their own predicament; even Korean churches deny any existence of undocumented members. This, in turn, contributes to a large culture of silence, that they’d rather not talk about undocumented immigrant issues including the new programs (like DACA) that can alleviate their plight,” Kwon elaborated.

Another reason cited was that a lot of people think Asian people do not really belong here and, Koreans are made to believe that they are from somewhere else and cannot be possibly a part of the US community.

Many undocumented Filipinos are uncertain about DACA and harbor reservations about it.

Lillian Galedo, executive director of Filipino Advocates for Justice, said, “A lot of people who do not take advantage of DACA point to its temporary status of relief as a big reason for their hesitation. This prompts mixed immigrant families — those with both documented and undocumented members – to make a very careful calculations about whether this is something that they should do.”

Galedo also pointed to a complicated immigration situation in the Filipino community, where there are thousands of people with approved petitions but no visas.

“They are waiting for those visas,” Galedo explained, “because the waiting period can be 10 to 20 years, people risk coming here on temporary – visitors, temporary workers — visas and basically staying here to be with their family in order to wait for their visas to come. The family petitioning system has driven the number of undocumented in the Filipino community as what also happens to other communities like the Mexican, Chinese, Korean, etc.”

The historical legacy of distrust of American authorities, even in the present administration, also plays a major part among Filipinos.

“We have been talking about legalization in this country for the last 30 years but expectations were raised and dropped every four to eight years depending on the political administration,” Galedo added. “There have been ‘anti-alien’ laws that made immigrants feel that they are outsiders and will always be outsiders.”

On a positive note, Philippine San Francisco Deputy Consul-General Jaime Ramon Ascalon said he was glad that many undocumented Filipinos are at least getting the driver’s license available under AB60, which grants driver’s license with limitations to undocumented immigrants in California.

“About 200 Filipinos lined up to get their certification,” Ascalon reported. “The consulate was able to get their contact numbers for future use in case another DACA and/or DAPA clinic is scheduled by us and/or nonprofit organizations.”

West Bay Filipino Multiservices Center Executive Director Vivian Araullo proposed that fliers or similar forms of communication in the vernacular be made for intended DACA beneficiaries. “It is important that we achieve maximum comprehension in communicating the details of DACA and other immigration benefits,” Araullo stressed.

Immigration: Best to apply for DACA or DAPA