Aquino thanks Order of Malta for shelter of ‘Yolanda’ survivors 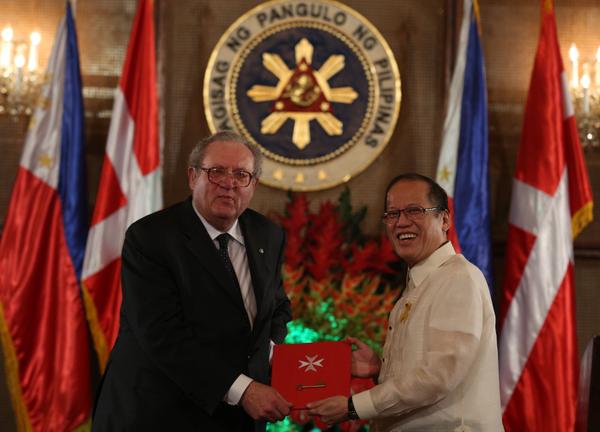 “Today’s ceremonial handover of the symbolic key to these houses further illustrates the Order’s generosity towards their fellowmen,” Aquino said during the visit of the Prince and Grandmaster of the Sovereign Order of Malta Fra’ Matthew Festing.

“From the humanitarian relief assistance you extended in the aftermath eruption of Mount Pinatubo in 1991, to the 700 new homes you constructed for those who were affected by Supertyphoon Yolanda in 2013, you have consistently helped us alleviate the suffering of our countrymen in the soonest possible time,” he said.

Aquino said the houses donated by the Order complements the Philippine government’s campaign to build better shelters in typhoon-prone areas in the country.

He also welcomed Malteser International, the Order of Malta’s relief and humanitarian arm, to create an office in Southeast Asia.

“Its physical presence in our part of the world will certainly benefit Asian countries by allowing more effective coordination and execution of relief activities, and facilitating our increased cooperation in areas of mutual benefit,” the President said.

Aquino conferred the Order of Sikatuna, Rank of Raja—the highest diplomatic merit in the country – to Festing.