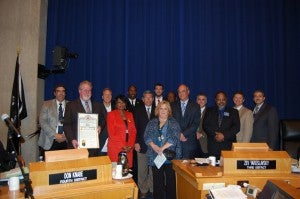 Members of the Los Angeles County Board of Supervisors.

LOS ANGELES – The County Board of Supervisors voted this week, to help eligible immigrants apply for President Barack Obama’s contested executive deferred action program, even as the fate of the President’s signature immigration initiative remains unclear.

Departments like Consumer Affairs, the Registrar-Recorder, and other groups would be directed to assist eligible immigrants with information and whatever else they would need to apply for relief.

The motion to establish a deferred action task force for LA County was written by Solis and Kuehl, both newly elected Supervisors. They said there were numerous ways the county could help get the word out about the expanded immigration programs and encourage people to come forward and apply.

“I’m very excited about bringing this forward; it’s something that probably should have been done early on,” said Solis, who said there are more than 100,000 residents in her district who could qualify.

Solis said she did not have a price tag for the task force, but some services, such as the retrieval of necessary documents, would fund themselves because “all of those would have attached fees to them.”

The lone dissenter, Supervisor Michael D. Antonovich, said it was premature for the county to move forward with creating the task force, until various challenges to the expansion of the program are resolved.

A Texas judge ordered a temporary halt to the expansion of the programs last week, saying Obama did not have the legal authority to make such sweeping changes. The GOP-controlled Congress is also attempting to block the expansion by limiting the Department of Homeland Security (DHS)’s budget, which would fund the federal programs.

Nearly half a million living in LA County would be eligible for the executive action, which also offers work permits to eligible immigrants brought to the States as children, as well as the parents of US citizens or legal permanent residents.

Supporters of deferred action cited its potential economic benefits, pointing to a recent study by the North American Integration and Development Center at the University of California, which found that LA County would reap an additional $1.1 billion in tax revenue.

“When you see something that’s good for people and good for the economy, you have to go for it,” said David Rattray, of the Los Angeles Area Chamber of Commerce, who spoke in favor of the task force program at a press conference with labor and religious leaders on Tuesday, Feb. 24 in front of the Kenneth Hahn Hall of Administration in downtown LA.

Steve Lamb, who testified against the county proposal, said the supervisors should have waited until the future of Obama’s program is clearer.

“It was inappropriate for them to vote on this,” Lamb told the Los Angeles Times.

A judge issued an injunction against the expansion of the program after Texas and 25 other states jointly filed a suit to stop it.

The state of California and several major cities in the state have come out in support of deferred action, with LA Mayor Eric Garcetti filing a “friend of the court” brief in the Texas case, supporting the President’s program.

Earlier this month, the city of Los Angeles also launched the Step Forward LA campaign to encourage immigrants to apply for the programs should they be officially launched. Mayor Garcetti has pledged to raise $10 million to assist at least 100,000 immigrants in the Los Angeles area with filling out their applications.

UCLA’s North American Integration and Development Center, which prepared the report on the economic impact of executive action for the Board of Supervisors, said that implementation of Obama’s programs could lead to job growth and a boost to the county’s tax base:  an estimated $1.6 billion in higher wages for immigrants who land better jobs thanks to new work permits; the creation of 38,500 additional jobs due to wage growth; and $1.13 billion in tax revenues.

Solis said the Los Angeles County Registrar-Recorder could also play an important role by providing immigrants who are eligible for DACA and DAPA copies of the necessary documents required to apply, including birth and marriage certificates, official documents proving residency, etc. Immigrants applying for either program will need to provide proof that they have lived in the US continuously since 2010.

“This is an opportunity to telegraph to the nation that we get it,” said Supervisor Mark Ridley-Thomas, who voted in favor of the motion, calling it “partly political.”

Supervisor Don Knabe, one of the two Republicans on board, also voted in favor of the task force, but asked that any plan developed by the team come back to the board for a formal vote before being implemented. Knabe stopped short of voicing his support for immigration reform.

“Whether you’re for it or against it, at some point we’re going to have to be ready as a county to move forward,” he simply commented.

Solis was confident in President Obama’s actions, saying the court injunction was just a “temporary setback.”

“This is stuck in the court process, but I believe the President has good standing on moving forward with this,” she said. “So, we need to be ready.”