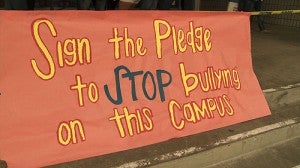 SAN FRANCISCO — One in three, that’s the proportion of California public school students who reported being bullied or harassed at school in the previous year, according to 2011-13 data just posted on kidsdata.org.

School staff members recognize the issue, with 37 percent reporting in a related survey that bullying was a “moderate” or “severe” problem at their school.

Race or national origin tops the list of cited reasons for bullying or harassment in all grades. Higher percentages of African American, Asian American and Native Hawaiian/Pacific Islander students reported incidents compared to students from other racial/ethnic backgrounds. Sexual orientation is the next most common reason cited, followed by gender, religion and disability.
Bullying and harassment are associated with long-term negative outcomes for both the bullied and students who do the bullying.

Experts suggest that a comprehensive strategy, which includes building up protective factors—such as caring relationships with adults—while also addressing related behaviors—such as substance abuse and violence—is most likely to succeed.

Read Next
Justice Davide to Knights of Rizal: Back BBL, serve the Philippines
EDITORS' PICK
Latest patient brings number of COVID-19 cases in Cebu to 29
Anne Curtis, Angel Locsin, and Gabbi Garcia: Celebrity tweets on the state of the nation
Senators on Duterte ‘shoot’ warning: ‘Let’s address hunger’ instead
Vico Sotto replies to NBI, asks for clarification
DOLE Bicol shells out P45.7M in aid for 9,000 displaced workers
Macalintal: NBI on ‘fishing expedition’ as no ‘genuine’ case vs Vico
MOST READ
Angelica Panganiban on endorsing Duterte in 2016: ‘Patawarin niyo ko’
PACC to NBI: Probe Robredo for ‘competing with national govt’ in fight vs COVID-19
PACC’s COVID-19 motto? ‘Lahat ng tutulong, ikukulong’ — Lacson
5 Filipinos on Forbes Asia’s “30 Under 30” roster
Don't miss out on the latest news and information.