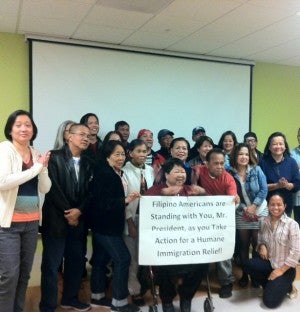 Stewart Kwoh, executive director of Advancing Justice–LA, said that while the ruling delays the start date for millions of immigrants to come forward and apply for deportation relief and work permits, the injunction is only temporary and likely to be overturned by a higher court. “The injunction does not impact the existing DACA program, which continues to operate with over 600,000 individuals already granted DACA and many more eligible who can apply immediately,” Kwoh added.

The White House said in a statement on February 17 that the Justice Department “will appeal that decision.” The statement said Obama was confident that a Texas court’s injunction against his executive order delaying deportations for millions of immigrants would ultimately be overruled, and was preparing to implement the order under that assumption.

DACA/DAPA applicants must go on
A national telephone news conference sponsored by the New America Media that was originally slated to provide more information about the “New/Expanded DACA (Deferred Action for Childhood Arrivals) programs changed gears with the announcement of the injunction.

“People should continue to come forward and prepare their application for temporary protection despite this court ruling,” said Sharry. While applications for DACA will not be processed, those who are eligible to apply should work with various organizations to get their documentations ready such as passports or birth certificates, Sharry explained.

Fitz reiterated Obama’s statement that his team of lawyers is proceeding aggressively to overturn the temporary hold on the DACA Program. While the advocates are optimistic that the injunction would be shortlived they projected that, “if worse comes to worst” the Supreme Court would be the arbiter of this injunction’s legality or constitutionality, said Marshall in response to a news reporter’s query.

Marshall noted that Obama’s lawyers have filed an appeal and that the odds are reduced against the conservative judge’s ruling.

One of the speakers, Cheer underlined the importance of the ethnic media continuing to reach out to the potential beneficiaries of DACA, particularly to the underrepresented groups in the Asian and Pacific Islander (API) communities. “There is a deep stigma in being undocumented among the APIs and it’s mostly cultural,” she told news writers.

Frank pointed out this temporary hold on the DACA program is mainly the Republican’s strategy to introduce an element of controversy to discourage people from signing up.

“The community should not fall for this derailing strategy; just assume it will open up,” he told the national media.
“DACA and DAPA are victories that immigrant communities won. We have confidence in the legal grounds for the programs and are disappointed that this lawsuit wastes precious resources that could be better used for outreaching to and educating eligible immigrants, particularly in the Asian American community where fear and misunderstandings about the programs run deep,” said Kwoh. We are confident that a higher court will overturn today’s temporary decision and affirm President Obama’s legal authority to implement the expanded DACA and DAPA programs.”

Secretary of Homeland Security Jeh Johnson, whose department would be responsible for implementing the executive orders, said in statement he “strongly” disagrees with the judge’s decision.

Johnson said his department would comply with the injunction while the appeals process plays out and his department will not launch the DACA expansion on Wednesday, as previously scheduled.