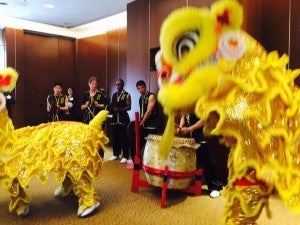 SAN FRANCISCO – For the Lunar New Year, Wells Fargo & Co. is giving a $50,000 grant to the Asian and Pacific Islander American Scholarship Fund (APIASF) to support scholarships for higher education for Asian-American students.

The company is participating in celebrations at New Year festivals throughout the country, including downtown San Francisco, Los Angeles, Houston, Seattle and New York’s Chinatown.

New and current customers can personalize their debit cards with specially designed Lunar New Year art for the Year of the Ram. For more details, visit [wellsfargo.com/yearofram].

“Wells Fargo has been a huge supporter of APIASF and has invested more than $5 million over the last eight years to support AAPI students. We are honored to have Wells Fargo’s support to help increase opportunities for underserved Asian American and Pacific Islander students and build the skills needed to succeed after graduation,” said Neil Horikoshi, president and executive director of APIASF.

Horikoshi added that APIASF supports 48 ethnicities identified by the US Census and the 300+ plus sub-ethnicities. He said there are no criteria to apply for a scholarship as long as one has an Asian American and Pacific Islander heritage. Applications can be downloaded from their website at www.aapisf.org

Wells Fargo’s donation is in addition to a multi-year $3.15 million commitment from Wells Fargo to APIASF in 2014. As a founding sponsor of APIASF, the company has invested in APIASF’s development programs, college tours and scholarship programs for college-bound students from underrepresented Asian and Pacific Islander communities. Since 2006, Wells Fargo has contributed more than $5.4 million to APIASF, and the collaboration has helped more than 800 scholars throughout the country and in U.S. territories in the Pacific.

“Wells Fargo is excited to celebrate the Lunar New Year with the Asian-American community,” said Arati Randolph, Wells Fargo senior vice president, corporate communications and APIASF board member. “We believe education and our collaboration with APIASF are among the many ways in which Wells Fargo invests in the growth of our communities. Wells Fargo is committed to working together alongside our communities because we value and understand that higher education is a pathway to a brighter future for many Asian-American families.”

Wells Fargo is committed to the Asian-American community and works closely with nonprofit organizations to provide quality assistance to those working to achieve their educational goals. In 2013, Wells Fargo invested a record $275.5 million in 18,500 nonprofits, educational programs and schools, including $10.5 million to organizations specifically serving the Asian community, including APIASF.

“The APIASF/Wells Fargo Scholarship has eased the financial burden of funding my education. This scholarship brings me one step closer to realizing my dreams, and for this opportunity, I am eternally grateful,” said Jason Truong, 2014 APIASF/Wells Fargo Scholar. “It is truly life-changing to have received such an honor, and I hope to pay it forward in some way in the future.”