US apologizes but pays only $2M for Tubbataha damage 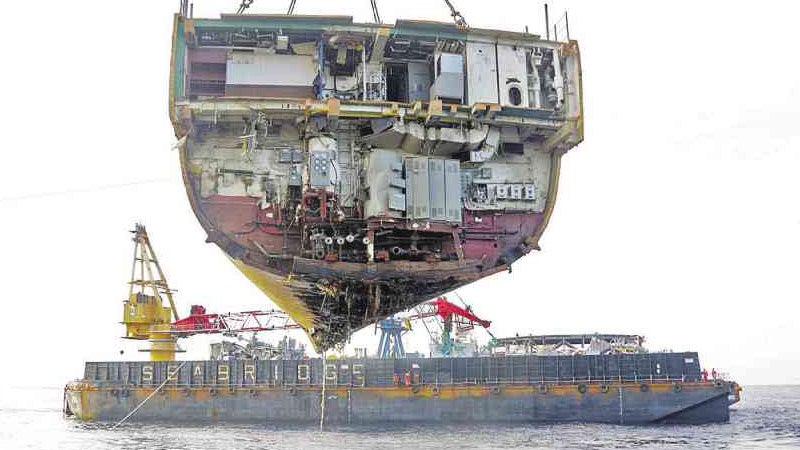 DEAD END. The bow of the American warship USS Guardian is lifted above water after it ran aground on an atoll in the Tubbataha Reefs in the Sulu Sea in January last year, damaging the protected World Heritage Site. PHOTO COURTESY OF PHILIPPINE COAST GUARD

MANILA, Philippines–The United States has paid the Philippines nearly $2 million as compensation for the damage caused by a US warship on the protected Tubbataha Reefs Natural Park, far below the fine of up to $27 million recommended by environmental groups.

The Philippines received the $1.97-million (P87 million) compensation on Jan. 20, the Department of Foreign Affairs (DFA) said yesterday in a statement.

It said the US government handed over the Philippine government’s “full requested amount of P87,033,570.71.”

A statement issued by the US Embassy in Manila said the US government had agreed to the compensation requested by the Philippine government and that Manila received the compensation last month for the damage that resulted from the grounding of the minesweeper USS Guardian at Tubbataha Reefs, a Unesco World Heritage Site, on Jan. 17, 2013.

The ship damaged 2,345 square meters of the coral reef that investigators said would take a generation to regrow.

The incident triggered national anger against the United States, which apologized for the accident and issued a report five months later that blamed the captain and three other officers.

The vessel, which was sailing to Indonesia after visiting Subic Bay, was found to have sailed to the protected area where marine vessels are not allowed due to “poor voyage planning,” according to a copy of the report.

Last month, US Embassy Deputy Chief of Mission Brian Goldbeck tweeted that he expressed to President Aquino “regrets” for the accident.

Vice Adm. Scott Swift, commander of the US 7th Fleet, also expressed regret over the incident, saying he recognized the significance of Tubbataha Reefs and its importance as a World Heritage Site.

In a separate statement, the US Embassy said it “deeply” regretted the accident.

“We are grateful for the assistance of the Philippines in coordinating with the US to address this accident, reflecting the deep and enduring alliance between our two nations,” the embassy said.

“The compensation will be [used] for the protection and rehabilitation of Tubbataha Reefs Natural Park,” the DFA said.

“Portions of the fund will also be used to further enhance the capability to monitor the area and prevent similar incidents in the future,” it said.

It also said the US government would provide additional assistance to the Philippine Coast Guard to upgrade its substation in Tubbataha Reefs.

Angelique Songco, Tubbataha Management Office park manager, said she was pleased with what the US government had done, but added that her office had not received a formal notice from the national government about the compensation.

Songco said the fund could be used to improve the park.

Songco said she was proposing that the compensation be placed in an endowment fund and that only the interest would be used for park management.

At a press briefing, Charles Jose, spokesperson for the DFA, was asked about the timing of the announcement of the US compensation for Tubbataha Reefs, especially as the US role in a Philippine counterterrorism operation that cost the lives of 44 elite police commandos in Mamasapano, Maguindanao province, on Jan. 25 had come under question.

Jose pointed out that the US payment was done on Jan. 20, five days before Mamasapano. He explained that the delay in the announcement was caused by time consumed by internal coordination between the two governments.

“The most important thing is that the payment has been made, we can move forward, we can work together to strengthen our capacity to protect Tubbataha,” Jose said.

But for Kabataan Rep. Terry Ridon, the $1.97 million the United States paid for the damage to the Tubbataha Reefs was “peanuts.”

Ridon said the United States “could have paid more” if the Philippines pursued the case through international arbitration.

“Philippine authorities essentially surrendered sovereignty when [they] relied on existing Philippine law to determine the extent of the US liability,” Ridon said in a statement.

“By tying [our] hands [with] existing domestic law instead of subjecting the dispute to international proceeding[s] for determination of damage and compensation, we are merely receiving peanuts for the breadth of damage caused by the Americans,” Ridon said.

“Reliance [on] Philippine law was erroneous in this case, as this is not a simple grounding of a mere shipping vessel. It is a grounding of a military vessel, which under international law is an extension of the sovereignty of a foreign state,” said Ridon, an environmental lawyer.

“As such, the determination of damage and compensation could have been subjected to international arbitration in which the terms are not limited to the compensation determined by Philippine law but [by] international standards [for] the grounding of vessels [on] coral reefs and atolls,” he added.

Environmental groups earlier called on the Philippine government to demand a fine somewhere between $16.8 million and $27 million, a valuation close to the fines paid in the 2009 grounding of the USS Port Royal in Hawaii on Feb. 5, 2009.

Ridon noted that when converted to US currency, the total fine paid by the United States would amount to only $1.9 million.

“To emphasize how measly this amount is, just consider that the FBI offered $5 million as reward for Zulkifli bin Hir’s capture,” he said, referring to the Jemaah Islamiyah bomb expert killed by Special Action Force commandos in the Mamasapano operation. With reports from DJ Yap and AFP