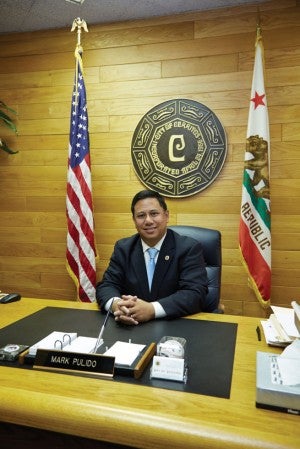 CERRITOS, California — In the last four years, the city of Cerritos issued a historic high of 708 business licenses.

It also posted a record year in sales with nearly $3 billion, which helped generate close to $30 million in sales tax. This money goes into the city’s general fund, which helps provide programs and services for Cerritos residents.

These are numbers that the city’s mayor, Mark Pulido, is proud to share as he nears the end of his first term as the first Filipino-American to have held the position.

“I’m so honored and humbled to serve as the first mayor of Filipino ancestry in the city of Cerritos,” he told the Asian Journal  Febrary 10 at a local Filipino-owned Cerritos cafe. “It took our community four decades to realize full political empowerment by having an elected representative have a seat at the table and to give a voice issues and concerns of the Filipino community.”

But simply because this particular chapter in his political career is coming to a close on a positive note doesn’t mean he’s ready to conclude his story yet.

With the upcoming March 3 primary in just a few weeks, Pulido is busy campaigning with his sights set on serving his beloved hometown for another four years. He has called Cerritos home for 42 years and counting, and his determination to further improve the city is evident.

There’s humble pride in Pulido’s demeanor when he talks about how much the city has progressed since he first took office.

For one thing, the city’s budget has dropped by 7.5 percent, or $6.7 million, throughout his four years on the city council.

“If re-elected, I look forward to spending my final term in office on the city council, continuing that important work,” he stated.

The number of residential burglaries has dipped 35 percent compared to when he initially assumed his current position. Additionally, Cerritos hasn’t had any homicides throughout his entire first term. Vehicle burglaries have also fallen 38 percent in the past year alone.

Pulido has all of the city’s notable statistics in one folder. As he leafed through a stack of 8”x11 1/2” print outs, he pulled out a specific sheet and pointed at a figure indicating that Cerritos has also trimmed more than 15,000 trees. “Tree City,” a name his hometown has been designated by the National Arbor Day Foundation, has more than 30,000 city-owned trees, making it what he calls a “suburban forest.”

Pulido was elected to the Cerritos City Council in March 2011. Prior to this, he served the community through the ABC Unified School District Board, where he was elected in 2001 and again in 2005 and 2009.

“He’s meticulous, he’s patient and he made sure that every decision revolved around the students and the community and the staff,” said ABC Unified School District Board Clerk Armin Reyes of Pulido and his service while on the board.

For his campaign, Pulido is working with Frank Yokoyama, a longtime friend who is seeking a seat on the city council.

“[Mark] strives to represent the entire community of the diverse City of Cerritos,” Yokoyama said. “Working alongside him shows me that he is respectful of all of the residents’ various opinions about the future of Cerritos and his overall goal is to keep Cerritos safe and great for all residents.”

As a Filipino-American political leader in an ethnically diverse city, Pulido said he feels a deep sense of responsibility to serve with great purpose and integrity the people of Cerritos, where Filipinos comprise about 15 percent of the population. He hopes that doing so will make the Filipino-American community proud.

“I want to say thank you, maraming salamat po sa inyong lahat, for all of the blessings that I have received and the opportunity for me to serve and to give back to my beloved hometown,” he said. “I feel so proud of our community for uniting and engaging in the Democratic process in a way that we made history together…. I was lifted up by the Filipino-American community through that bayanihan spirit in order to be elected to the Cerritos City Council.”

Some of the accomplishments acknowledging the voice Filipino community that occurred under Pulido’s leadership include his support for community-organized celebrations of Philippine Independence Day in June 2014 and Filipino American History Month in October last year.

In December 2013, the city also played an active role in helping survivors of Typhoon Haiyan through donation drives and a benefit concert that raised more than $51,000 in one night.

As March 3 nears, Pulido is continuing to encourage residents to see how important the election is.

“We are emerging from one of the most challenging times in the city’s history and we can help take an active role in shaping the future of Cerritos for our children and our grandchildren and for future generations,” he remarked.

“As I seek re-election, I submit myself again to the community for their consideration and I hope that I have been able to address some of the concerns and the issues of our community, and I hope to have earned their vote one more time.”