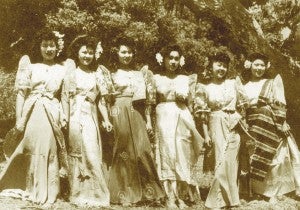 World War II was quickly coming to an end. Manila was a jungle of wreckage. Office buildings, churches, homes, hotels, factories and docks lay in ruin. In other parts of the country, people poked through similar scenes of destruction, looking for food or belongings or the remains of family members killed by either the retreating Japanese or the bombardment of the advancing Americans.

“Our family survived by gathering wild cassavas, bananas, guavas, pineapple and jackfruit,” recalled Flory Bautista, then a teenager in war-torn Leyte. “There was never enough food, but we hardly thought about it because we were afraid. We just wanted to survive.”

A few months later, Bautista would leave behind that tragic chapter of Philippine history and sail for America as the “war bride” of a Filipino serviceman in Uncle Sam’s army. Her journey was part of a larger phenomenon—the beginning of the Second Wave of Filipino immigration to the United States.

The Second Wave of Filipino immigration was short in duration but profound in its impact on the size and composition of the Filipino community in America. The bulk of the wave came into the United States directly after the war, between 1946 and 1953, as Filipinos who served in the armed services were granted U.S. citizenship for their contribution to the war effort. Many of these servicemen had been living in the United States before the war as younger members of the First Wave of immigration.

Returning with their Florys, they would, for the first time since the beginning of Filipino immigration to the United States at the turn of the century, build a more stable community and produce a second generation of “baby boom” Filipino Americans.

Before Flory Bautista’s arrival in 1948 the pioneering Filipino immigrants of the ’20s and ’30s bore the brunt of the anti-Asian sentiment that earlier victimized the Chinese and the Japanese. Most Filipinos worked for low wages in the agricultural fields of the West Coast or as domestics in the large cities. The Great Depression made them easy scapegoats as “dark-featured aliens” who were displacing white workers and “causing unemployment.”

Because of the colonial relationship between the United States and the Philippines, Filipinos were regarded as “nationals” or “wards.” They were ineligible for citizenship and could not buy property. Anti-miscegenation laws barred them from marrying whites. The scarcity of Filipino women prevented the rise of a full-fledged community and the emergence of a large second generation.

Filipino women were not encouraged to immigrate as U.S. labor recruiters mainly wanted young, single males to carry out the arduous and transient work demanded by the emerging agriculture industry.

Of the 331,092 Filipinos who entered the United States between 1920 and 1929 (the majority 93 percent) were males. Females were outnumbered roughly 13 to one. World War II and the invasion of the Philippines by Japan would change the bachelor society of Filipinos in the United States.

On January 3, 1942, the day after Manila fell to the Japanese forces, the U.S. Selective Services national headquarters scrapped the rules that had prevented “nationals” from joining the U.S. military. It opened the way to Filipino participation in all war-related efforts.

Some infiltrated the Philippines as commandos as early as 1943. The U.S. command gave the majority the “eventual opportunity of fighting on the soil of their homeland,” when Gen. Douglas MacArthur “returned” to the Philippines in October 1944.

It was off to war. The scene at the docks was different for the Filipino GIs. While their American counterparts were receiving long goodbye kisses from their sweethearts, the Filipino GIs had no women to leave behind. What they had was the opportunity to bring back “war brides” with them.

When the Filipino GIs arrived in the Philippines—for some after more than a 20-year absence—they were hailed as part of the “American liberation forces.” Carmen Valerio of Alameda, California was a teen-ager at the time and recalled that “when American tanks rolled in everyone just came out of their houses to greet the soldiers. People brought glasses of water for the war-weary soldiers. The GIs distributed rice, army rations and pork and beans.”

Their patriotism aside, many Pinoy GIs saw the trip back home as a chance to find brides and start families as soon as they got back to the United States. On July 31, 1945, the Philippine Examiner, published in Stockton, California carried a story announcing that the U.S. State and Justice departments would “permit Filipino nationals, who are either married to U.S. citizens or who have children born in the United States, to enter the United States without visas and at the expense of the U.S. government.”

Many of the Pinoy GIs were already in their late thirties or early forties. The denial of a normal family life in the United States had only sharpened their awareness of the opportunity that was now in front of them.

Since their tour of duty was limited, GIs hurriedly proposed to their prospective brides as soon as they met them, or to their parents, whoever would facilitate the marriage. An abbreviated romance led directly to the altar. The young Filipinas knew their suitors and had to make quick decisions that would completely change the course of their lives. Sometimes their parents made the decisions for them. Many of the women were still in their teens, and their flashy GI beaus were sometimes 20 years older.

“Actually, there was no courtship. His people and my parents talked about the marriage. I had no part in the talks at all,” Sixta Vinluan reminisced.

Carmen Valerio met her husband while he was with the Philippine Civic Affairs Unit in San Juan, Rizal. His office was in charge of distributing rations.

Valerio said that one morning when she was standing in line for rations, people were cutting ahead and kept her line moving.

“I got so mad I went to the front to complain,” she recalled. “I complained to the first person I saw and it so happened that person was my husband-to-be. I found out we were province-mates from Pangasinan. Immediately, he gave me the rations as well as other goods.

“The next day, he was at our house to visit me, and every day since. Within one week we were engaged and within a month, we got married. It was so funny! Our wedding reception was at the army headquarters and the food we served was all ration food!”

Carmen Mapanao from Agno, Pangasinan, had a similar story. “He was working in the naval base as an airplane painter. He went home to find someone he could marry. He went to my hometown to visit his cousin. The cousin and his wife visited me one day in the school where I was teaching. It did not take long.

An International Migration and Naturalization document showing the number of immigrants per country reported a 2,500 percent rise in Filipino immigration to the United States between 1945 and 1946. The war brides were among these new arrivals. In 1947, the number of immigrants again doubled from the previous year and steadily rose in succeeding years.

With the massive influx of Filipino women, Second Wave immigrants altered the character of the Filipino community. Before the war, the U.S. Public Census of 1940 listed a total of 1,502 Filipino women in California; the 1950 U.S. Census showed a jump to 5,141. The number of married Filipinos increased phenomenally. In 1940 there were only 5,327 married Filipino males of the 26,313 Filipinos listed in California. In 1950, 17,616 men were listed as married.

For the most part, the war brides did not face the same degree of economic instability previously experienced by their husbands or other members of the First Wave. At least for men who stayed in the military, certain essential needs were provided, such as government housing, PX (post exchange) privileges and medical care. Even for those who left the armed services, special veterans loans helped people buy homes and automobiles. And most important of all, the returning GIs were granted full citizenship, which opened doors to civil service positions.

In many ways, the security provided by military benefits, combined with the influence of the McCarthyism that was gripping the country, contributed to a conservative political climate in the community. Labor organizing also became less of a priority as more Filipinos began to leave the fields. Besides, McCarthyite witch-hunts put the trade union movement on the defensive.

Although Filipinos were still victims of discrimination, the task of settling the new family and the atmosphere of a post-war economic boom discouraged open involvement with the issues of the day. Furthermore, many a marginalized bachelor of the First Wave now had citizenship, GI benefits, government jobs and war brides. And they naturally were Americanizing with a vengeance.

As for the war brides, their presence was immediately felt. The old, established all-male clubs such as the Caballeros de Dimasalang, Gran Oriente Filipino and Legionarios del Trabajo now formed women’s auxiliaries. Veterans of Foreign Wars chapters and regional clubs sprang up in towns and cities with women as part of their peripheries.

Coronation balls and box social dances quickly replaced the taxi-dance-hall-bachelor-culture of the ’20s and ’30s. Also, for the first time, scores of small Filipino American children—a second generation—could be seen trailing behind their parents. Seen, but for the succeeding two decades, not heard in a community that politicians loved to describe as a “model minority.” That is, until the civil rights movement, the Vietnam War and the nationalist resurgence in the Philippines in the ’60s shattered the post-war serenity. But that’s another story.