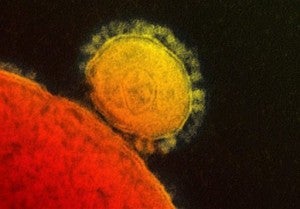 This file photo provided by the National Institute for Allergy and Infectious Diseases shows a colorized transmission of the MERS coronavirus that emerged in 2012. AP FILE PHOTO

A 32-year-old Filipino female nurse, who arrived from Saudi Arabia on Feb. 1, is the country’s first positive case of the deadly Middle East respiratory syndrome coronavirus (MERS-CoV), the Department of Health (DOH) announced on Wednesday.

Health Undersecretary Nemesio Gako told a press briefing that health officials were tracking down 224 passengers who were with the infected nurse on Saudi Airlines Flight SV860.

“Testing was done on the patient and yielded positive results. The patient is being watched closely by our doctors and health workers,” Gako said in a prepared statement.

He added that the nurse was in a stable condition.

While the risk of transmission was low since the patient had no symptoms of the virus during the nine-hour flight, the DOH appealed to the passengers and others who came in contact with the nurse to have themselves tested and to undergo a throat swab examination to rule out infection of MERS-CoV.

“Our appeal, since we already started contact-tracing, is that they don’t make it hard for us to contact them and they are requested to be subjected for testing because we are doing this for their and their families’ protection,” DOH spokesperson Lyndon Lee Suy told reporters.

MERS-CoV, a deadlier but less transmissible cousin of the SARS (severe acute respiratory syndrome) virus, carries symptoms similar to the common flu that include fever, cough, colds and sneezing. The incubation period of the virus is usually 14 days.

The nurse, who traveled with her husband from Riyadh, was brought to the Research Institute for Tropical Medicine (RITM) in Muntinlupa City on Monday after days of having cough, fever and body pains, among the symptoms of the virus.

Lee Suy said the initial consultation at an undisclosed health facility did not treat the case as MERS-CoV until the nurse was referred to RITM on Monday. She was immediately confined in one of the hospital’s negative pressure rooms.

The husband, who had no signs of the virus, was confined in a separate isolation room in the same hospital as a precaution.

Lee Suy said three tests were done on the nurse and all yielded positive for the virus. But he said the country’s first MERS-CoV case came from Saudi Arabia and was not due to local transmission.

“This is the first confirmed MERS-CoV case that was tested in the country,” he said.

Last year, two Filipino nurses tested positive for the virus while still in the United Arab Emirates and Saudi Arabia, respectively. But confirmatory tests done at the RITM following their return to the Philippines yielded negative results.

“According to the nurse, she did not have any contact with any case of MERS-CoV back in Saudi. But she was working in a health facility so there was a chance that she might have [encountered] a patient [with the virus],” Lee Suy said.

The nurse developed a fever and cough a day after her arrival in the Philippines. Aside from the nurse’s copassengers, health officials were also tracking down other possible contacts between Feb. 1 and Feb. 10, the day tests confirmed that she had the virus.

So far, the patient’s relatives have yet to develop symptoms of the virus but they will have to be tested and placed under observation, Lee Suy said.

He said health personnel who attended to her during her first consultation had also been subjected to a throat swab examination.

“For the community, we are also doing contact-tracing… We need to check on them to make sure they do not have a fever, they do not manifest any symptoms relative to MERS-CoV,” Lee Suy said.

Dr. Julie Hall, the country representative of the World Health Organization (WHO), said that while RITM had a “high level capacity” for confirming such cases, the DOH had been directed to send samples to one of WHO’s collaborating laboratories in Hong Kong as part of the international protocol for MERS-CoV.

“We thank the government for informing us early about this and their willingness to share the samples for collaboration is very important as part of the global effort to prevent the [spread] of MERS-CoV,” Hall said.

Nine countries in the Middle East have had confirmed cases while 13 other states, now including the Philippines, have had travel-associated cases, or cases that they have diagnosed but which originated overseas.

First reported in 2012 in Saudi Arabia, 37 percent of the people confirmed to have caught MERS-CoV have died.

As of Feb. 5, the WHO had recorded 971 laboratory-confirmed cases of MERS-CoV, of which 356 died, mostly in Saudi Arabia.

“The chance of transmission on the plane is low but it is important that those passengers be contacted and particularly those close to the [patient] are tested and are given the necessary advice and reassurance,” Hall said.