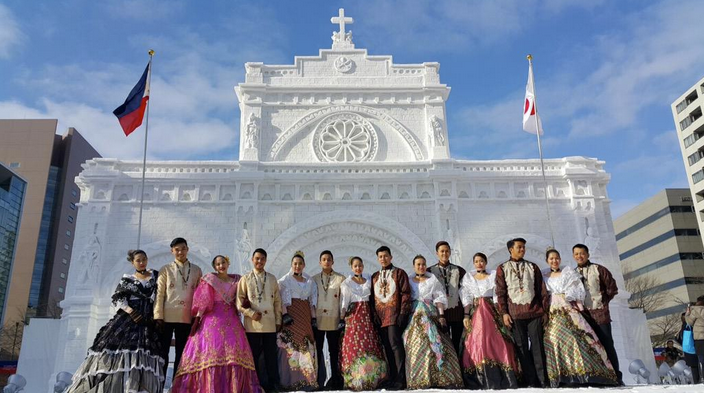 The snow sculpture of the Manila Cathedral towers over guests at the 66th Sapporo Snow Festival in Japan. PHOTO from Tourism Secretary Ramon Jimenez Twitter Account

The 13-meter ice replica of the Manila Cathedral was designed and sponsored by the Japanese media firm Hokkaido Broadcasting Co. (HBC).

“The Cathedral withstood numerous calamities including typhoons, fire, earthquakes, and wars, and is a symbol of the resilience of Filipino faith,” HBC said in statement.

“The intricate designs and decors of this Neo-Romanesque structure contributes in making the Manila Cathedral as one of the most-prized edifice of the Filipino Christian heritage,” HBC added.

Tourism Secretary Ramon Jimenez Jr. in a Twitter post said it was an “honor” for the Philippines to be part of Japan’s snow festival.

The snow festival opened last February 5 and will run up to February 11.

The Manila Cathedral, built in 1581, has been damaged and destroyed several times by fire, earthquake and by war but has been repeatedly rebuilt.

The current cathedral building was built in 1958. It was closed for renovation in 2012 to make it withstand earthquakes. It was reopened in 2014 after completion of the renovation.

The Manila Cathedral, like Pope Francis, has humble start