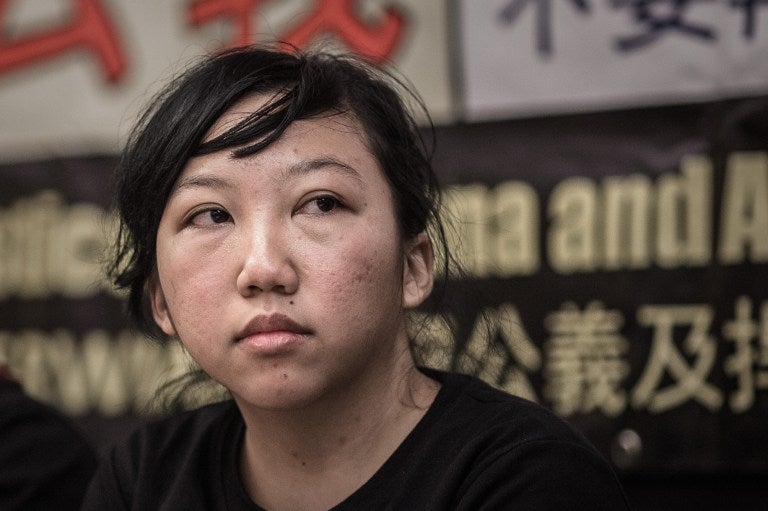 Indonesian former maid Erwiana Sulistyaningsih attends a press conference in Hong Kong on February 10, 2015 after her employer was convicted of beating her in a “torture” case that sparked international outrage and spotlighted the plight of migrant domestic workers in the Middle East and Asia. AFP

HONG KONG — From a “simple village girl” too petrified to report the torture she was facing, Erwiana Sulistyaningsih has become a confident advocate of workers’ rights in a city where maids often live in slave-like conditions.

Shocking pictures emerged of a severely beaten Sulistyaningsih looking frail and skinny and in a critical condition at an Indonesian hospital in January last year, and focused the spotlight on the rights of domestic helpers in Hong Kong.

The photos and her account of the abuse she received shocked the Asian financial hub and sparked anger amongst the migrant worker community, renewing concerns over the abuse of domestic helpers.

Sulistyaningsih, who according to the judge’s verdict “described herself as a simple village girl, coming from a village where her parents are farmers”, was sent back to Indonesia by her former employer, Law Wan-tung, when she became too weak to walk.

She told the court that Law covered her in makeup to hide her injuries for the trip to the airport and strapped a nappy on her as she could not use the toilet.

A little over a year later, a healthier looking Sulistyaningsih was back in Hong Kong and won a landmark case against Law, who was convicted Tuesday for beating and starving her, and keeping her prisoner.

“To employers in Hong Kong, I hope they will start treating migrant workers as workers and human beings and stop treating us like slaves,” Sulistyaningsih told a press conference after the Tuesday verdict.

But the 24-year-old, who has been hailed as a hero, had initially wanted the case against Law to be low-profile.

“In the beginning I didn’t want my case to be this big because it’s too much burden for me emotionally and psychologically,” Sulistyaningsih told the South China Morning Post.

During the six-week trial, prosecutors said Law turned household items such as a mop, a ruler and a clothes hanger into “weapons” against her maids.

Sulistyaningsih recalled for the court in December how she lived on nothing but bread and rice for months, slept only four hours a day and was beaten so badly by Law that she was knocked unconscious.

“On the sentence of my ex-employer I hope that she will receive maximum sentence… this is still not enough compared to what she did to me and other victims,” she said at the press conference.

Law could face up to seven years in jail when she is sentenced later this month.

The former maid also said she continues to have difficulty breathing after her nose was injured and her front teeth remain fractured by a punch from Law.

As the court case against Law went on, more domestic helpers stepped forward to report abuses they faced from Law and other employers.

“I’m happy because through my case other cases have been exposed,” Sulistyaningsih told Cable Television News.

Despite the hardships, however, she has nevertheless said she had forgiven her abuser, and now plans to study economics at a university in Indonesia and continue taking part in activities supporting the rights of migrant workers.

The city is home to nearly 300,000 maids, mainly from Indonesia and the Philippines, and criticism from rights groups over their treatment is growing.

And in a sign of her transformation from a self-described “simple village girl”, Time magazine named her one of the world’s 100 most influential people in April last year, hailing her bravery in speaking out and pushing for laws that better protect maids in Hong Kong.