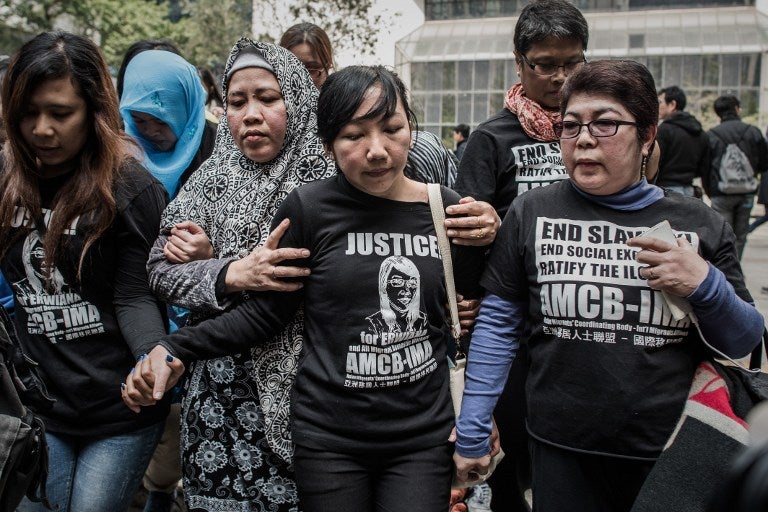 Indonesian former maid Erwiana Sulistyaningsih (C) leaves the court of justice in Hong Kong on February 10, 2015 after her employer was convicted of beating and starving the Indonesian maid in a “torture” case that sparked international outrage and spotlighted the plight of migrant domestic workers in the Middle East and Asia. AFP

HONG KONG — A Hong Kong woman was convicted Tuesday of beating and starving her Indonesian maid in a “torture” case that sparked international outrage and spotlighted the plight of migrant domestic workers in the Middle East and Asia.

The verdict, read out to a courtroom packed with journalists and activists, was met with cheers by supporters of Erwiana Sulistyaningsih, a former domestic helper who has become the face of a campaign for improved workers’ rights in the financial hub.

Pictures of the injuries sustained by Sulistyaningsih, who was admitted to hospital in her home country emaciated and in a critical condition, at the hands of mother-of-two Law Wan-tung fuelled anger in Indonesia and shocked Hong Kong.

“She was, for want of a better word, a prisoner on those premises,” Judge Amanda Woodcock said, referring to Sulistyaningsih, who told the court she had been “tortured.”

“I am sure she was telling the truth,” Woodcock said, adding: “She was completely isolated.

“She did not complain about the abuse because of fear… When Erwiana left Hong Kong, she was a shadow of her former self.”

“You are remanded in custody,” Woodcock told Law, after announcing that the 44-year-old had been found guilty of 18 of the 20 charges laid against her, including grievous bodily harm and criminal intimidation.

A jubilant Sulistyaningsih, clad in a black t-shirt with her face emblazoned on it and the word “justice,” told AFP after the verdict was read out that she was “very happy,” and hugged nearby activists.

Law, meanwhile, lowered her head but appeared to be calm. She is due to face sentencing on February 27.

The charges against Law, who was arrested in January 2014, included grievous bodily harm with intent, assault, criminal intimidation and failure to pay wages.

The only two counts she was not found guilty of were related to her treatment of another domestic worker. She had denied all the charges.

“It’s a victory for Erwiana,” an ecstatic Aaron Ceradoy, programme coordinator for the Asia Pacific Mission for Migrants, told AFP outside the courthouse.

“It would be good if the migrant community can use this case to strengthen their position on their demands for changes in policies.”

During the six-week trial, prosecutors said Law turned household items such as a mop, a ruler and a clothes hanger into “weapons” against her maids.

Sulistyaningsih has described in vivid detail how she was “tortured,” starved, beaten and ritually humiliated by Law, with prosecutors saying she was treated as an “unpaid slave.”

The case sparked protests by migrant workers in the financial hub, and has thrust the plight of migrant domestic helpers in Asia and the Middle East into the spotlight after reports of torture and even killings.

Sulistyaningsih said she lived for months on nothing but bread and rice, sleeping only four hours a day and being so badly beaten by her then-employer that she was knocked unconscious.

Law’s defense accused the former maid and another two domestic helpers involved in the case of being “opportunistic”, adding their evidence showed the injuries could have been caused by accidents.

Hong Kong is home to nearly 300,000 maids from mainly Southeast Asian countries — predominantly Indonesia and the Philippines — and criticism from rights groups over their treatment is growing.

Amnesty International in 2013 condemned the “slavery-like” conditions faced by thousands of Indonesian women who work as domestic staff and accused authorities of “inexcusable” inaction.

It found that Indonesians were exploited by recruitment and placement agencies who seize their documents and charge them excessive fees, with false promises of high salaries and good working conditions.

Read Next
Honest OFW feted in Dubai
EDITORS' PICK
Cherry Mobile teams up with Cloud Panda PH, launches online store
Someone from the Philippines can become $356 Million richer this Tuesday
Philippines’ COVID-19 cases accelerate to 18,638
Duterte certifies as urgent anti-terror bill
Leveling up your ‘lutong bahay’ with the kitchen companion you never knew you needed
‘Puno na lahat:’ Metro workers brave lack of public transport, rains on Day 1 of GCQ
MOST READ
‘If I had not been SolGen, I will make you eat your words,’ Calida tells Coco Martin
51 percent of German firms holding back investments in PH, but not because of COVID-19
Duterte certifies as urgent anti-terror bill
5 car dealership outlets shutting down
Don't miss out on the latest news and information.