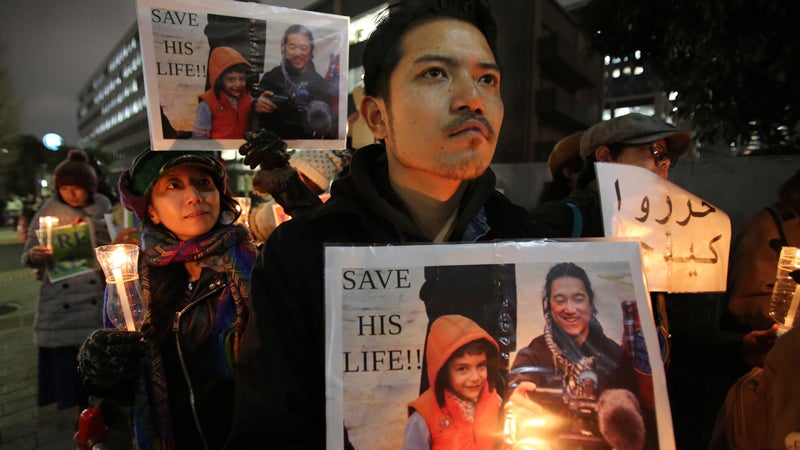 In this Friday, Jan. 30, 2015 file photo, protesters holding signs bearing a photo of Japanese journalist Kenji Goto who was taken hostage by the Islamic State group appeal the government to save Goto during a rally in front of the prime minister’s official residence in Tokyo. Whether in tsunami-stricken northeastern Japan or conflict-ridden Sierra Leone, it was the story of the vulnerable, the children and the poor that drove the work of Goto. The news of his killing in a video purportedly by Islamic State militants sent Japan into shock and mourning Sunday, Feb. 1, days after his plight as a hostage in Syria united many people in praying for his release. (AP Photo/Koji Sasahara, File)

MANILA, Philippines–The Philippine government on Monday denounced the reported execution of the second of two Japanese hostages held by Islamic militants in Syria and conveyed its condolences to the Japanese people.

“The Philippines resolutely condemns what appears to be the brutal execution of Japanese journalist Kenji Goto. We express our condolences to the Japanese people as they cope with the recent loss of the two Japanese lives,” the Department of Foreign Affairs (DFA) said in a statement.

Goto, 47, was a freelance journalist and documentarist who contributed reports to the Japanese public broadcaster NHK and the television network TV Asahi, among other media outlets. He was known for his coverage of the suffering of civilians in war zones.

The killing of Goto, who went to Syria in October, came days after his friend and fellow Japanese national, Haruna Yukawa, was executed. Both men were beheaded by an Islamic State group as purportedly shown in separate videos circulated via social media. The Japanese believe the video to be genuine.

The latest execution carried out by Islamic militants was condemned also by the United States, France and Britain.

“The Philippines joins Japan and the international community in global efforts to thwart the propagation of extremist ideas, terrorism, violence and crimes against humanity,” the DFA said.