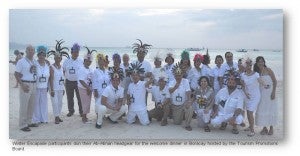 SAN FRANCISCO — More than 200 Filipinos residing in Canada are visiting the Philippines on a “heritage tour” organized by the Philippine government and backed by a global remittance company.

Dubbed “Winter Escapade 2 – It’s More Fun in the Philippines,” will last from January 30 to February 6, according to the remittance firm Western Union.

The tour was also organized to attract investment into tourism projects in the country,” Western Union also noted.

The heritage tour, which started in 2008, was organized by the Department of Foreign Affairs, the Tourism Promotions Board of the Philippines and the Philippine Embassy to Canada, with Western Union as an “active supporter.”

As part of this year’s tour, a Sunshine Adventure promotion lets participants to simply take “selfies” in different historical tourist spots in the Philippines and upload their entries in their respective Facebook accounts using the hashtag #WUSunshineWE2. Special prizes await the winners, which will be announced during the tour’s farewell dinner.

Participants are encouraged to request their friends to “Like” and share their photos with the end view of gathering more ‘Likes’ for the project.

For every “Like,” Western Union will match an equivalent amount of P100 to a maximum contribution of P500,000. The amount raised by the collective “Likes”will go to a special cause supported by the Philippine posts comprising Team Philippines in Canada.

“Western Union recognizes that many Filipino immigrants feel a sense of responsibility to help out fellow countrymen and as a company we are giving them opportunities to build these connections,” said Patricia Riingen, senior vice president of Western Union in Southeast Asia & Oceania.

“The activity aims to gather ‘Likes’ and shares from friends and families of our Filipino Canadian delegates, in a collective effort to raise funds for our Like for a Cause project,” Riingen added