For one Fil-Am, working in PH is a career option | Global News

For one Fil-Am, working in PH is a career option

Rovaira Dasig remembers when she first saw Monday Street and the house in Mandaluyong to where her mother had been sending balikbayan boxes packed with American goods for as long as she could remember.

“I felt really tall,” Dasig, who stands about five-foot-three, says. The roads were cramped, the rooms were tiny, the ceilings low, everyone was shorter than she was. She saw a kid pooping in the street. The houses were made of exposed cement blocks, cobbled together as materials became available. Everything was bathed in the cold, dim light of cheap fluorescent bulbs.

That neighborhood, where she might have grown up if her mother hadn’t made their way to the United States, isn’t a slum. The people who live there own their homes and have decent, working-class jobs.

But it’s a far cry from where she grew up in America.

The small town where her mother eventually settled the family sits at the foot of Mount Rainier, outside Seattle. The air was clean, and it was the sort of place that had homecoming football games, county fairs and Daffodil Princess contests. It was a place where Dasig could grow up and be class president and valedictorian, then study economics at Wellesley College, the elite East Coast institution. Dasig, 26, was born in Biñan, Laguna, and moved to America as a toddler. Her life has followed the trajectory imagined by every Filipino ever to have applied for an immigrant visa at the US embassy.

But like many young Americans, finding opportunity and meaning in her work has superseded the need to achieve the suburban dreams of the generation before hers.

Dasig moved to Manila two years ago and says, “It’s not the same place our parents left behind.”

She believes that the generation of Filipinos who grew up outside the country have a place in the new Philippines — and it’s not the one where an enlightened Fil-Am returns to the homeland to lend a helping hand to the destitute masses who have been left behind in this poverty-stricken country. To Dasig, this savior complex is woefully outdated.

“The Philippines is going somewhere whether you’re here or not,” she says. “You either catch that wave, or you don’t.” Dasig believes that Filipinos outside the Philippines should start seeing the country not as a place that needs saving, but as one where they can come back and live out their dreams. 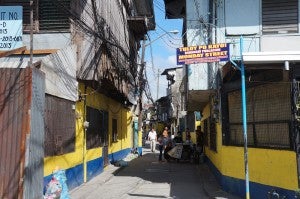 To that end, Dasig founded PULSE with Melissa Gibson, a Filipina-Canadian also based in Manila. Dasig describes PULSE as a “business incubator for the creative economy.” With PULSE, Dasig hopes to pave a path for the diaspora to come back to the Philippines and build careers in the creative sector — film, the arts, music, design, fashion, food and tech — and “recognize that they can do what they already do, are good at, and love, in the Philippines.”

The pair is now scouting spaces for an arts incubator, where painting studios, workspaces and innovative kitchens come together in a heady mix of creative collaboration. In the coming months they’ll launch an artists-in-residence program, mentorships, workshops and weekend excursions to help reveal Manila’s creative side to the country’s massive diaspora.

Dasig knows firsthand how immigrating can change the course of a family’s fortunes. She appreciates the role that call centers and the BPO industry have played as the current engines of the economy, “but it’s not sustainable because it doesn’t cultivate our culture.”

Dasig believes the Philippines is more than it’s ability to serve the world, that it’s greatest resource is the people’s creativity, and “it’s high time for the world, especially the children of the Philippines diaspora, to recognize the brimming potential of the country.”

Those who choose to move to the country to practice their trade may make the Philippines a better place in the process, but the Philippines will be saving them just as much.