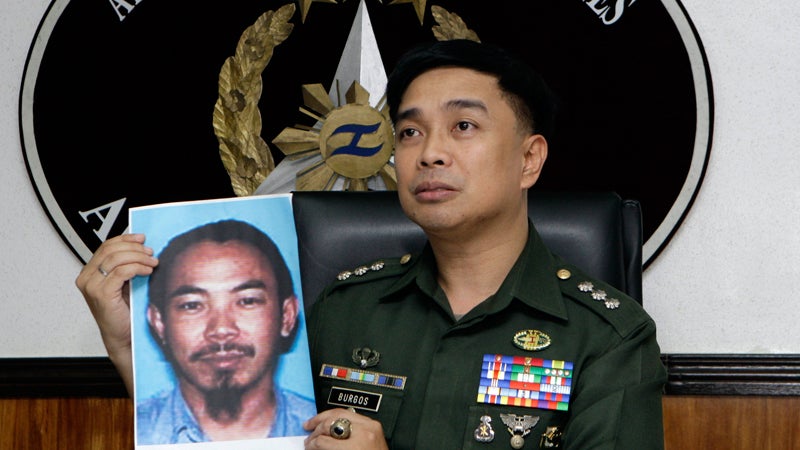 MANILA, Philippines  — The cellphone message of the Filipino police commandos to their base was triumphant: “Mike 1 bingo,” a code meaning they have killed one of Southeast Asia’s most-wanted terror suspects, Malaysian Zulkifli bin Hir, also known as Marwan.

But the euphoria among police generals monitoring the Jan. 25 dawn assault in a southern swampland was brief.

As daybreak lifted their night cover, the young commandos came under intense rebel fire, trapped in the marshy fringes of Mamasapano town, a Muslim rebel stronghold about 2-3 kilometers (1.2-1.8 miles) from where backup police forces waited. Unable to carry Marwan’s body, one of the commandos chopped off his finger and another took pictures as proof of his death, according to police officials.

Another policeman kept frantically calling for reinforcements by radio, but standby forces failed to penetrate the battle scenes and the pleas for help eventually vanished.

The fighting left 44 commandos dead — the biggest single-day combat loss by government forces in recent memory — and a familiar question: Is Marwan dead or alive?

Commanders and a confidential police intelligence report say Marwan was killed, something they expect to be validated by DNA tests. A purported picture of the slain militant circulating in the local media closely resembled Marwan’s profile in wanted posters. But many remained skeptical.

In 2012, the Philippine military announced that Marwan and a Singaporean militant known as Mauwiyah were killed, along with a Filipino Abu Sayyaf extremist commander, in a US-backed airstrike on southern Jolo island. The operation employed American-supplied smart bombs for the first time.

Filipino police intelligence officials, however, believed Marwan and Mauwiyah survived and continued hunting them. They have since launched at least two major secret attempts to capture Marwan in the southern Philippines, where according to US authorities, he has been hiding since 2003.

A US-educated engineer, believed to have been born in Malaysia’s Muar town in Johor province in 1966, Marwan is among the last few known surviving militants of his generation of al Qaida-inspired extremists who survived the anti-terror crackdowns in Asia following the Sept. 11, 2001, attacks in the U.S.

Known as a master bomb-maker, Marwan also was very skilled in evading capture. He had more than two dozen aliases and spoke the languages of Malaysia and the Philippines, along with English and Arabic.

Marwan used to head a terrorist group called the Kumpulun Mujahidin Malaysia, and also was a senior member of the Indonesia-based Jemaah Islamiyah terrorist network, according to the US State Department, which offered a $5 million bounty for his capture and prosecution.

The JI was blamed for the 2002 nightclub bombings that killed 202 people in Bali, Indonesia.

It was in the southern Philippines, though, where he stayed longest, taking cover among Muslim separatists fighting a decadeslong rebellion. He had three Filipino wives, who helped him assimilate and blend in. He struck alliances with Muslim insurgents from virtually all groups and provided bomb-making and religious training in exchange for sanctuary, according to government terrorism reports.

He allegedly helped plot numerous bombings and other attacks.

But after surviving the 2012 airstrike, Marwan proved to be a liability for the Abu Sayyaf, one of four rebel groups operating in the south. He was reportedly expelled from Jolo island by an Abu Sayyaf commander, Radulan Sahiron, who believed the Malaysian was a magnet for military attack, according to a government interrogation report of a captured militant commander, Khair Mundos.

From Jolo, Marwan traveled to the marshy heartland on the main southern island of Mindanao and strengthened his alliance with a notorious local bomb-maker, Abdul Basit Usman. Police said that Usman and Marwan were together during Sunday’s assault, but Usman escaped.

“There are reports that they run factories of improvised explosive devices, which they sell to fellow terrorists,” President Benigno Aquino III said this week. “They have injured and killed many people, and they continue to threaten the safety of our citizens as long as they roam free.”

Police commandos nearly caught him in July 2012, in a remote farming village off Butig town, near a key camp of the Moro Islamic Liberation Front, the largest rebel group that signed a peace deal with the government last year. The group has agreed to a cease-fire that requires government forces to notify the insurgents in advance of any planned anti-terror raids to avoid accidental clashes.

The commandos missed Marwan that time, but they did seize a huge cache of explosives, electronic bomb parts, assault firearms, ammunition, Islamic extremist books and two laptop computers, according to a confidential police report.

Washington has increasingly grown worried about Marwan. US security officials were concerned when Marwan’s character was depicted in a 2012 video war game in which he narrowly escapes US forces in the southern Philippines but later dies in a suicide attack on a train.

They feared that the video may raise Marwan’s stature among foreign jihadis and help him raise terror funds, a Philippine security official told The Associated Press on condition of anonymity because he was not authorized to talk to reporters.

Even before the latest raid, the commandos tried but failed to capture him near the corn-growing community last year. Military officials have long suspected that Marwan eluded arrest by taking cover near rebel strongholds.

On Sunday night, the police commandos did not notify the Moro rebels of the raid, officials said.

Was it worth sacrificing 44 elite police troopers to get an international terrorist, Talino, the police commander, posed a question at the eulogy.

“We live by our motto: We save,” he said, holding back tears. “I’m sure if you will ask them, it is worth it.”

Marwan finger cut off for DNA

US agents paid cash for info on terrorists