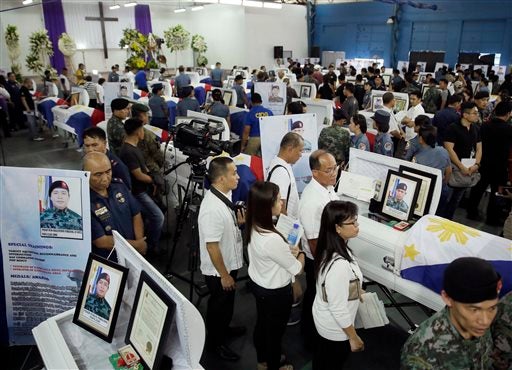 Malaysian Gen. Yaakub Samad, IMT head, said the IMT board of inquiry will start its investigation on February 7 “to determine the real circumstances that led to the SAF-MILF encounter.”

The IMT is made up of personnel from Malaysia, Brunei, Libya, Indonesia, Japan, Norway and the European Union. It has been in existence since 2003.

Asked why the IMT would start its investigation 13 days after the incident, Samad said they had to coordinate with potential witnesses first.

The IMT-BoI, he said, will also talk to villagers to get to the bottom of the incident and prevent similar incident from happening in the future.

The IMT was instrumental in the disengagement that led to the retrieval of those who perished and evacuation of those injured in the Mamasapano clash.

IMT’s Norwegian member, William Hovland, said it took them hours to establish contacts “due to lack of telecommunications signal in the area.”

Brig. Gen. Carlito Galvez, Jr., government ceasefire panel chair, said the entry of IMT representatives in Barangay Tukanalipao during the firefight helped “deescalate” the situation and allowed other government troops to evacuate wounded policemen away from the clash site.

Senator Teofisto Guingona III, meanwhile, wanted the creation of a “Truth Commission” to determine the circumstances that led to the bloody incident.

“The Mindanao massacre is at the heart of the nation and the peace process. The Truth Commission would be tasked to conduct thorough and impartial probe,” Guingona, who chairs the Senate Peace, Reconciliation and Unification Committee, he said.

“While I respect the planned creation of a PNP Board of Inquiry to conduct a probe, I believe that the Maguindanao massacre has far-reaching consequences and implications which make it necessary for an independent commission to do the work. The massacre struck at the very heart of the Nation and of the Peace Process,” he added.

Guingona suggested that the Truth Commission be made up of “veteran statesmen” such as former Supreme Court Chief Justices Reynato Puno and Hilario Davide, Sr., and former Sen. Wigberto Tañada.

“I believe that an independent commission alone can help us get to the bottom of this unfortunate incident and to find the answers to the questions the Nation is asking,” Guingona said.

Shooting kills 2 officers, one a Fil-Am, in Hawaii