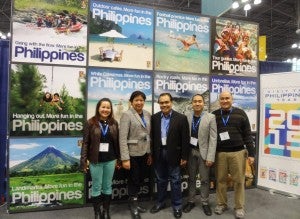 NEW YORK CITY — The New York Times Travel Show must go on despite sleet and snow. Countries from six continents boast the very best of their culture, culinary delicacies, adventures and specialty tours in the biggest annual travel and tour convention here.

The opening last Friday, January 23 was dedicated to trade show and media conferences; the succeeding Saturday and Sunday proved to be a real treat to the traveling public.

In one whole day, attendees had the opportunity to meet various tourism bureaus, tour operators from all over the globe, hotels, accommodations and airlines services.

Approximately 700 inquiries were received throughout the three-day convention, with leads from travel partners, wedding planners and mainstream tourists. Surprisingly, most of the guests were already familiar, or are currently booked for a trip to one of the Philippines’ famous beaches.

The Philippines has four other World Heritage Sites designated by UNESCO (United Nations Educational, Scientific and Cultural Organization), these are Banaue Rice Terraces, Underground River at Palawan, Tubbataha Reef and the Baroque Churches of the Philippines, including San Agustin Churches in intramuros and in Paoay, Santo Thomas De Villanueva Church in Miag-ao and Nuestra Senora Dela Asuncion Church in Santa Maria.

For Filipino-Americans and their guests seeking packaged pricing, the annual Ambassadors, Consul-Generals, Tourism Directors (ACGTD) Tour is the best way to go, as the hotels and all land arrangement are included, several events are hosted by Philippine businesses, and additional tours are available from carefully selected vendors only.

This year, the ACGTD Tour is slated for July 6-10, with a segment of travel to Cebu. The official launching will be announced soon at Boston. Also, starting this year, a Winter Escapade is launched for the Canadian market. The NY Tourism Officer-in-Charge Mitchelle Dy accompanied the tour group currently in Manila, Siquijor, Dumaguete and Cebu.