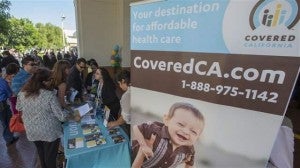 The amount should help the uninsured to buy health coverage and that support is available to many others eligible to sign up before February 15, said Lee.

The total amount of premium assistance — known as the federal Advanced Premium Tax Credit (APTC) — was $3.2 billion paid to health insurance companies on behalf of those who enrolled in private coverage through Covered California in 2014.

The consumers themselves paid $1.1 billion toward those policies in 2014, meaning that for every dollar a subsidized consumer spent on premiums, the federal government paid another $3.

“This is an extraordinary time in our nation’s history,” Lee said. “The Affordable Care Act is making it possible for individuals to get the care they need by making coverage affordable.”

The data released Monday are reflected on new Health Insurance Marketplace Statements being mailed this week by Covered California. Known as Internal Revenue Service (IRS) Form 1095-A, the two-page statement (www.CoveredCA.com/news/pdfs/sample-1095-A.pdf) will show the amount of Advanced Premium Tax Credit each household received on a month-by-month basis in 2014.

Similar to other tax documents, like a W-2 or 1099, the 1095-A will be used by consumers when they file their federal tax returns this year to ensure the subsidy they received is appropriate.

“Consumers need to use this information when they file their taxes for 2014,” Lee said. “For many consumers, their tax credit will need to be adjusted, because their income is different than what they estimated it would be for 2014. As a result, consumers will see their tax credit adjusted upward or downward in their tax return based on their actual income as reported to the IRS for 2014.”

Under the Affordable Care Act, the amount of tax credit reducing the consumer’s monthly health insurance premium payment is based on an estimate of their income made when they purchase their insurance. Consumers pay their share of the premium to the insurance company, and the federal government pays a portion on their behalf, based on their estimated income in the year ahead.

The amount paid by the government is called the Advanced Premium Tax Credit, because it is paid in advance but reconciled as a tax credit at tax time based on the consumer’s official income as reported to the IRS.

Consumers can elect to wait to receive the entire tax credit at the end of the year, but almost all consumers took their premium tax credit in advance.

Many tax preparers and commercial tax software products are ready to accept information from Form 1095-A. Consumers may be able to get free software or in-person assistance filing their taxes and can learn more at www.irs.gov/freefile or www.irs.gov/VITA.

“In addition to premium assistance, many consumers also benefited from cost-sharing reductions that lowered their out-of-pocket costs when they visited the doctor,” Lee said.

In 2014, more than 60 percent of consumers who received subsidized coverage through Covered California qualified for cost-sharing reductions, which reduced their out-of-pocket health care expenses. Lee said that in 2014, the value of the out-of-pocket discounts per household amounted to approximately $1,200 per year.