All Pope all the time 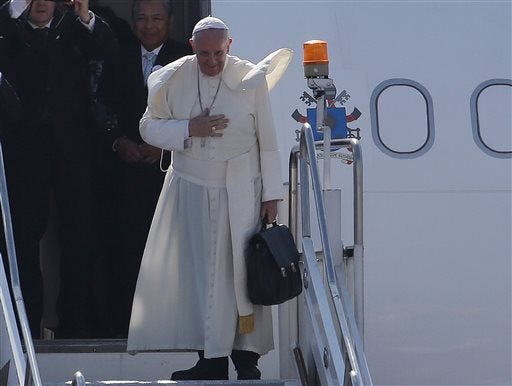 Pope Francis gestures before boarding his plane as he departs from Manila on Monday, Jan. 19, 2015. AP FILE PHOTO

Is he gone? Is the news cycle still all Pope all the time? Can we come down now from our collective Rapture and clear up certain misconceptions that Lolo Kiko unwittingly left in his trail?

For example, did he or didn’t he say, “Catholics don’t have to breed like rabbits”? The wise statesman Sen. Tito Sotto angrily claimed that the Pope never said that. It was an invention, he asserted. Okay, for once I agree with Senator Sotto.

A confidential source in the Pope’s airplane entourage emailed me what the Holy Father actually said, and said in good taste. My source confided that the pontiff made sure he used familiar euphemisms so that conservative Filipinos, like Sen. Sotto, would understand him clearly. My source swears this was His Holiness’ actual statement to a reporter on the plane back to Rome:

“There are natural ways of preventing non-immaculate conception. For example, when the waves start crashing on the shore, or when the moon starts hiding behind dark clouds, just quickly put that chug-chugging locomotive in reverse and get it out of the dark tunnel fast. Catholics don’t have to go forth and multiply Malthusianly.”

But it was great to see millions of Filipinos turn out for Pope Francis, especially if they did so because of his refreshingly compassionate and populist voice. None of the deadening dogma most of his predecessors were fond of. I do hope his Liberation Theology-lite message was what made most Filipinos feel closer to him. But part of me thinks Filipinos would’ve still turned out in their multitudes had the visiting pontiff been a scheming Borgia or a Machiavellian Medici.

It’s because the papal office itself commands veneration; the Pope, whoever he is at any given time, is officially St. Peter’s successor, the keeper of the keys to Heaven, the Earthly direct channel as it were to the Kingdom. In this light, the office plays a useful function in the context of harsh worldly realities. The Caesars keep messing up our material life, but Catholics can at least look up to the Pope and believe that he could put in a good word on their behalf, for release from earthly trials and for an assured place in the Happier Bye and Bye. That hope is a salving balm, the papacy, a spiritual apothecary. And if the incumbent is compassionate like Pope Francis, who commiserates with the oppressed, why that’s an even more potent pain reliever.

Moreover, Catholicism strongly resonates with Filipinos culturally. Hegemonic American influence swiftly captured our national imagination because it spoke to Filipinos’—especially the nascent intelligentsia’s–yearning for bourgeois modernity. And yet capitalism’s ethical fuel, Protestantism and its stripped-down, no-frills values, which came with the Americans, failed to unseat Catholicism as our religion of choice. It’s not just because Rome had a head start of three centuries. Catholic symbolism, ritual and iconography strike a vibrant chord among a people whose spirituality is intricately laced with remnant folk mysticism. We like our epistemology supernatural and our saints, miraculous superheroes that save the day. To top it off, Protestants don’t have a Pope, a living icon that serves as an object of concentrated veneration, which is what Pope Francis received from our giddy millions.

But enough of these frivolous “papal” musings. Back to serious PayPal matters.

I’ll have you know that my source in the Pope’s entourage also networked me with a leading member of the Vatican’s theological arm, Commissione teologica internazionale, who let slip an important piece of information.

The theologian, Cardinal Angel Cabeza de Aspiller revealed that the Roman Curia for months had been analyzing the validity of Vice President Jojo Binay’s lament that he is being “crucified” by his enemies.

“We have come to the conclusion that indeed the vice president of Asia’s most Catholic country is being mercilessly crucified,” the illustrious cardinal declared.

“It’s now just a matter of deciding which of the two thieves who were crucified alongside Jesus he is most like. My own guess is Gestas, the unrepentant one,” he added.

If it’s any consolation to Mr. Vice President, the Pope has also indicated his openness to the possibility that even dogs can go to Heaven. That should take care of the family pet.