CBCP: Unspent donations for papal visit to be sent to Rome 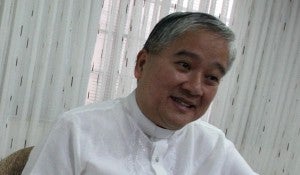 MANILA, Philippines—Unspent donations to his visit to the Philippines will be sent to Pope Francis in Rome to aid his charities worldwide, the Catholic Bishops’ Conference of the Philippines (CBCP) said on Thursday.

“Whatever excess money that we have from the papal visit will all be given to Pope Francis,” Lingayen-Dagupan Archbishop Socrates Villegas, president of the CBCP, told reporters after the closing of the 110th CBCP plenary assembly.

“Nothing will be left in the Philippines because the Pope has many charity projects in many parts of the world,” Villegas said, but he did not give any figures, as the auditing of the donations as well as expenses during the Pope’s visit was still going on.

Villegas was quick to add that the Holy Father did not ask for the money.

“He did not ask for it, let’s be clear about that. It is our decision in the Philippines to help the Holy Father in our own small way. We want to help him with his projects for the poor in other parts of the world,” he said.

According to Villegas, the biggest expenses were those for the sound system and the LED screens placed in the venues of the papal events.

The CBCP also urged Catholics to continue praying for Pope Francis up to Feb. 22 as part of the obligatory prayer for the Pontiff imposed by the conference.

“The bishops decided that from Jan. 22 until Feb. 22 we would still have a prayer for the Pope to be prayed in all the Masses all over the country as an act of thanksgiving for the successful papal visit and at the same time to keep our promise to Pope Francis that we will pray for him,” Villegas said.

“Everywhere he went the Pope said, ‘Please pray for me,’ and we said, ‘Yes.’ But we want to make sure that we are really praying for him. That is why we will have an obligatory prayer for Pope Francis to be done in all the dioceses in the Philippines,” he said.

Villegas thanked the media for covering the papal visit.

“It is such a blessing to have worked with you during the papal visit. It feels good to be a Filipino during these days. The whole world watched us for five days while the Pope was here and we delivered the best,” he said.

Tacloban City in Leyte province gave Pope Francis a turnout of 200,000 for his Mass during his mercy mission there last Saturday.

In his rally with young people at UST on Sunday morning, Francis urged the world to learn to cry for the millions of poor, hungry, abused and abandoned children after he failed to answer a question from 12-year-old Glyzelle Iris Palomar: Why does God allow children to suffer?

Trump resists national shutdown, leaving it up to states