‘Pinoy effect’ show of force set in Rome on Sunday 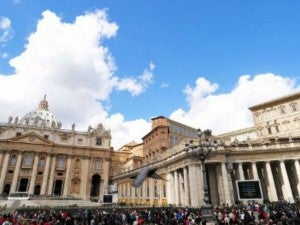 VATICAN CITY—After 6-7 million people turned up for Pope Francis’ concluding Mass at Rizal Park on Sunday, Filipinos in Rome are working to muster 7,000 of their own for the weekly papal Angelus at St. Peter’s Square on Sunday noon.

The show of force is in thanksgiving for the Pope’s highly successful visit to the Philippines last week that drew the biggest crowd of his two-year papacy so far.

There are at least 110,000 documented Filipinos working in Italy and at least 60 Filipino organizations in Rome alone, according to the Department of Foreign Affairs.

The Filipino community is well organized and can be mobilized quickly through SMS, said Fr . Gaspar Sigaya, a Filipino priest who is an archivist of the Dominican Curia in Santa Sabina.

“If there’s a Francis effect,” Sigaya said, referring to the “rock star” popularity of the Pope, “there’s also the Pinoy effect.”

“Pinoy effect” means Filipino enthusiasm for the Pope as shown by tens of thousands mobbing the Pope everywhere he went in the Philippines.

Even the Pope marveled at the size of the crowds that greeted him, describing it as “virtually oceanic.”

The papal Angelus on Sunday is highly anticipated because Francis was absent on Jan. 18, as he was in the Philippines.

On that day, the Pope said his last Mass in Manila that drew 6-7 million people who stood under the cold rain for hours to be with the Pontiff.

There have been reservations about the size of the crowd as estimated by Metro Manila authorities, and some say the crowd just matched the 5 million drawn by St. John Paul II’s closing Mass for the World Youth Day celebrations at the same venue in January 1995, listed in the Guinness Book of World Records as the biggest gathering for a Pope.

On Jan. 11, the Sunday before he embarked on his Asian trip, Pope Francis thanked the Angelus crowd for banners from Sri Lankans and Filipinos wishing him success on his journey.

“Thank you for your good wishes on that banner, many thanks!” he told the crowd. “And I ask you to please accompany me in prayer and I ask the Sri Lankans and Filipinos who are here in Rome to especially pray for me on this journey.”

Before the Angelus on Sunday, the Pope is expected to reflect on the day’s Gospel reading, Mark 1:14-20, which is relevant to the Pope’s office as the successor of St. Peter because the passage is about how Jesus commissioned Simon Peter and his brother Andrew and the first disciples.

The passage is timely for the Philippines as well, since in commissioning his first disciples, who were simple fishermen, Jesus instructed them to be “fishers of men,” that is, to be the first missionaries.

During his visit, Pope Francis called the Philippines the “principal Catholic country in Asia” that should lead in the evangelization of the continent.

Coincidentally, Jan. 25 in the Catholic calendar commemorates the conversion of Saint Paul.

Formerly Saul of Tarsus, he persecuted the first Christians but was converted after recovering from blindness. He evangelized among the Gentiles or non-Jews and became a proto-missionary, much like Philippine Catholics commissioned by the Pope to help spread Christianity in Asia where Catholics are a tiny minority.