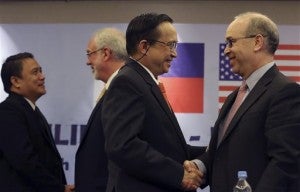 MANILA, Philippines (AP) — China’s land reclamation in contested reefs in the South China Sea has become “massive,” and is continuing despite protests from other countries, a Philippine official said Wednesday, citing surveillance photographs.

Philippine Foreign Undersecretary Evan Garcia and the top US diplomat for East Asia, Daniel Russel, said after annual security talks that their governments have separately urged Beijing to stop activities that could worsen tensions and violate a 2002 accord designed to prevent armed conflicts over disputed islands and reefs.

“It is massive, just look at the photographs. These are not small adjustments. These are huge activities that are obviously designed to change the status quo,” Garcia said in a joint news conference with Russel.

“Let me add also that the massive reclamation of China in the South China Sea is a clear violation of what we have agreed upon” in the 2002 accord, Garcia said. “It is not helpful in terms of finding a way forward and it is not an example of what anybody would understand as self-restraint.”

The photographs Garcia referred to were not immediately distributed to the media.

The Chinese Embassy in Manila had no immediate comment, but Beijing’s foreign ministry has said that the area where the reclamation is reportedly underway is part of China’s territory, and that any Chinese activities there should be of no concern to Manila.

In May last year, the Philippine government released military surveillance photos of Chinese land reclamation in Johnson South Reef, called Mabini in the Philippines and Chigua in China, in the disputed Spratly chain of islands, reefs and atolls.

Military chief of staff Gen. Gregorio Pio Catapang told reporters two weeks ago that China’s reclamation work in at least three reefs appeared to be “50 percent complete,” including one with an elongated portion that is 1 to 2 kilometers (1/2 mile to 1.2 mile) long and could be turned into an airstrip.

Catapang told The Associated Press on Wednesday that the latest surveillance photos of China’s reclamation work were obtained by the military in October and new photographs would be pursued.

The Philippines, Vietnam and Malaysia have protested the reclamation on Johnson South Reef and other reefs. The reclaimed areas could be used by Beijing as a military base and a resupply and refueling hub, according to military officials.

Brunei and Taiwan also claim parts of the sprawling sea that China claims virtually in its entirety.

China’s reclamation work and other related activities are “an ongoing concern” for the US and other nations, which rely “on freedom of navigation and sea lanes and the principle of unimpeded, lawful commerce” in the South China Sea, Russel said. The South China Sea has some of the world’s busiest commercial sea lanes.

Russel and Garcia said their governments support a peaceful resolution of the disputes based on international law.