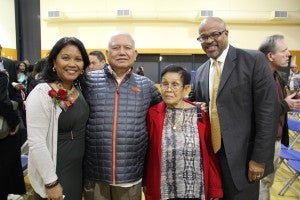 SAN FRANCISCO—An abiding love for children and community spurs Hydra Mendoza-McDonnell on her third term as a member of the San Francisco Board of Education.

“I’m very committed to our young children in San Francisco,” she told Manila Mail after she, along with new and returning members of the board, was sworn into office January 6.

McDonnell was sworn into office by San Francisco Mayor Edwin Lee, whom she considers one of her greatest political influencers.

“We’re away from our family so this was really important for me to make a very solid decision to run for office again. One of the things that matters the most to me is being with first-generation elected Filipinos, so for my own community it mattered a lot.”

Her third-time win emphasizes the need to work on building a pipeline of other Filipinos that could get elected and assume leadership roles, she added.

Besides serving as a commissioner on the Board of Education, she is the mayor’s senior adviser on education and family services. In her first two terms as a school board member, she championed improving academic standards, implemented policies that have increased parent engagement, and brought technology into the classroom. She has also built up coalitions and collaboration among community and education leaders to advance services for students.

“We’re very clear that our young people matter. My children are in the school district and my husband works in the same district, so it’s a very huge responsibility,” she said.

Having grappled with severe budget cuts during her first two terms, McDonnell aims to “make sure that everybody’s invested in our school” on her third term.

“It’s not just parents or students who go to our schools that think public education is important,” she said. “Like I said in my speech, education is something that can’t be taken away. We need to make sure that we are delivering a really good and strong, solid education for all our people, so they can go on to college and a career.”

Establishing close ties between the city and the school district is crucial in molding students, she added.

“That would be my legacy – just wanting to make sure that I continue the service as a conduit between the city and school district. I want to be sure that we’re preparing our kids as best as we can for the future.”