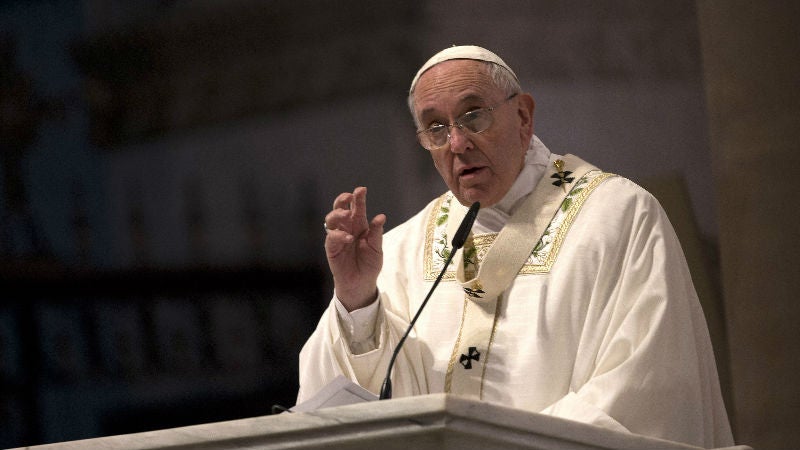 Pope Francis delivers his speech during a Mass in the Cathedral of the Immaculate Conception, in Manila, Philippines, Friday, Jan. 16, 2015. (AP Photo/Alessandra Tarantino)

Morie Guiam, a college professor and peace worker, urged the magazine’s editors to obey and learn from the Pope’s message, which he viewed as a consoling remark to every Muslim hurt by the magazine’s caricatures.

Cautioning against provocation, Pope Francis was quoted by journalists on board the papal plane, as having said the right to liberty of expression come with the obligation to speak for “the common good.”

On the other hand, the Philippine Center for Islam and Democracy (PCID) bewailed the Paris violence in which 12 French journalists were killed, which was reportedly an offshoot of Charlie Hebdo’s publishing of cartoons that made fun of Muhammad.

In a statement, PCID president Amina Rasul said: “The violence that claimed the lives of 12 French journalists, ostensibly in the name of religion, is anathema to these universally held values of liberty, equality and brotherhood–concepts which are part of the fundamental tenets of Islam.”

In his Facebook account, Willy Junghan posted: “Finally the Pope said it. And Pope Francis is right, just because there is a freedom of speech or press or whatever freedom does not mean you can just do or say anything your little heart desires. That freedom does not give you the right to insult others in words or in (drawings). Always remember that some people can (tolerate) your rudeness in your speech or in your cartoons and some just cannot.”

Reports have also quoted Pope Francis as saying “there are limits to freedom of expression and that following the Charlie Hebdo attack in Paris “one cannot make fun of faith.”

The Chalie Hebdo cartoons, placed opposite its front cover, according to reports, depict the Prophet Muhammad as being helpless against the magazine’s comical attacks on him.

Guiam said he could not recall of any instance that any Muslim community provoked the Charlie Hebdo magazine to make fun of the Prophet Muhammad.

Pope on Charlie Hebdo II: What about ‘turn the other cheek?’