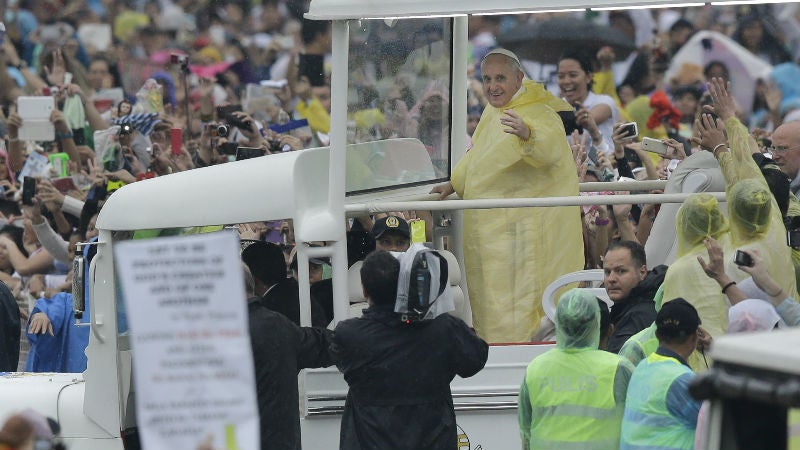 Pope Francis waves to the faithful as he arrives at Rizal Park to celebrate his final Mass in Manila, Philippines, Sunday, Jan. 18, 2015. Millions filled Manila’s main park and surrounding areas for Pope Francis’ final Mass in the Philippines on Sunday, braving a steady rain to hear the pontiff’s message of hope and consolation for the Southeast Asian country’s most downtrodden and destitute. (AP Photo/Bullit Marquez)

MANILA, Philippines — Pope Francis made a triumphant entrance for a mass with millions in the Philippines on Sunday aboard a “popemobile” styled after the nation’s iconic, flamboyant and much-loved “jeepney” minibus.

The pontiff, standing in the elevated open body of the uniquely Filipino version of his popemobile, travelled through the streets of the capital Manila for the main event of his five-day visit.

Wearing a thin plastic yellow poncho over his vestments, the 78-year-old pontiff smiled and waved to hundreds of thousands who had lined the route to the venue for the mass.

The rectangular vehicle with distinctive giant grill repeatedly stopped so he could reach into the cheering masses and pick up babies to kiss and bless them.

The pope rode the jeepney popemobile to Rizal Park where millions had gathered to hear him celebrate mass, in one of the world’s biggest papal gatherings.

The jeepneys are regarded by many Filipinos as a symbol of national ingenuity. Locals created them from surplus US military jeeps after American forces left at the end of World War II.

The bodies of the jeeps were extended, seats were added and a fixed roof put in place. The vehicles were then painted with colorful and Catholic designs.

They proved to be strong vehicles with decades-long lifespans, and can be seen ferrying people through city streets and animals on mountain roads.

However the diesel-powered vehicles are also one the nation’s chief air pollution culprits.

Francis’ jeepney was an all-white popemobile. It had no doors, after the pope told local organizers he did not want a bulletproof vehicle so he could reach out and touch his followers.