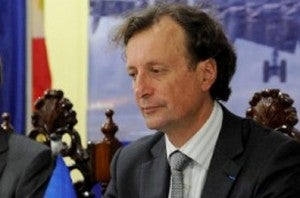 In a tribute to the French victims held by the French embassy in Manila on Wednesday night, Garachon said that “everyone was Charlie,” and “children of the cartoonists” of the magazine, in reference to the French magazine which was attacked by Islamic gunmen in retaliation for its publication of cartoons of the Prophet Mohammed.

Garachon said the Jan. 7 attack on the magazine has taught everyone the importance of freedom of speech and freedom, and that the magazine was attacked because those behind it wanted “silence to prevail.”

“Those people wanted to bring us to our knees, but they brought us to our feet. The best answer is to stand all together for our values—the values of our democracy, freedom and freedom of speech,” Garachon said at the gathering held at Alliance Francaise office in Makati.

“We are grateful to the international community and to all our friends who stand with us for our common values. It has been very warming for us to see this. We should not remain silent,” he said.

The French ambassador told reporters that the French police were mobilized to provide maximum protection for French journalists and that they were all doing their best “to protect them.”

Asked whether the newly released issue of the magazine that used the Prophet Mohammed in its cover would create yet another incident, he said France was doing its best to be “extra-careful.”

“The main issue is that I think we all agree that we have to stand up, we have to face the situation. We have to be together to show to the world our commitment for the freedom of speech,” he said.