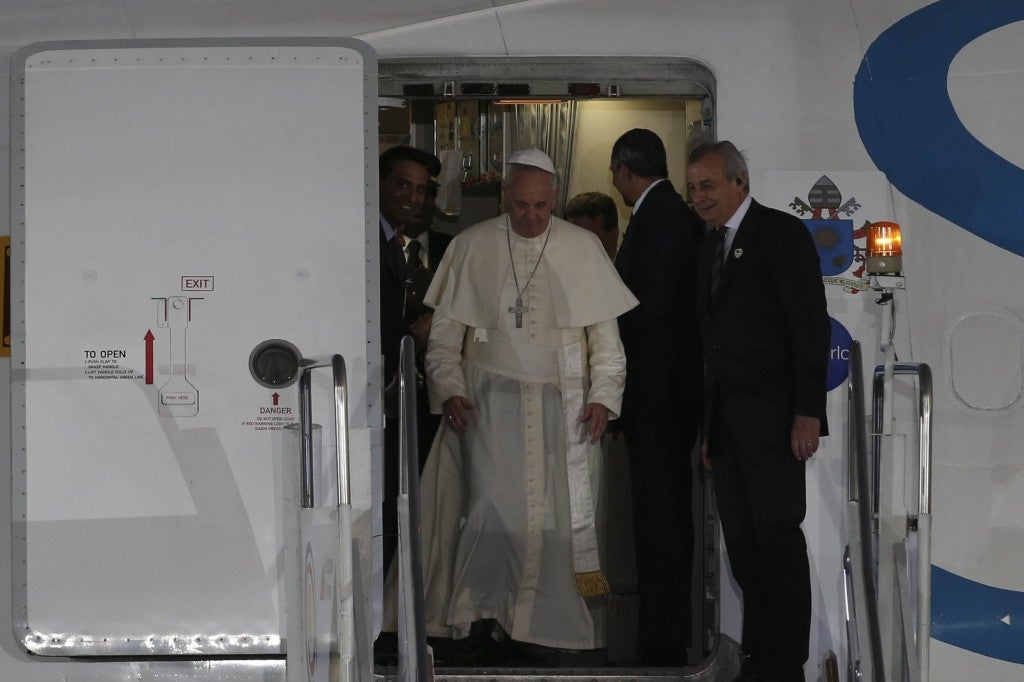 Pope Francis’ skull cap is blown upon his exit of from the Sri Lankan Airlines as he arrives at the Presidential Hangar in Villamor Airbase in Pasay City. PDI/Edwin Bacasmas

MANILA, Philippines–When Pope Francis shares a meal with 30 survivors of natural disasters in Palo town, Leyte province, on Saturday, he will be “doing much more than demonstrating his love for the poor,” the head of the United Nations Office for Disaster Risk Reduction said on Thursday.

Margareta Wahlstrom, also UN Secretary General Ban Ki-moon’s special representative for disaster risk reduction, said the Pope’s visit to the storm-revaged Eastern Visayas community “will encourage us all to reflect on how we can seize the opportunity to make 2015 the Year of Resilience by reaching historic agreements on new measures to reduce the impact of natural disasters, climate change and to adopt a new set of sustainable development goals.”

In a statement, a copy of which was e-mailed to the Inquirer, Wahlstrom said the Pope’s apostolic trip to the Philippines and his solidarity with the people of Tacloban City, ground zero for Supertyphoon “Yolanda” (international name: Haiyan), which left more than 6,300 people dead and tens of thousands homeless, “should speak volumes to world leaders and government officials tasked with adopting a series of new agreements this year [that] will form the basis for tackling poverty in the next 15 to 20 years.”

In March, the Third UN World Conference on Disaster Risk Reduction in Sendai, Japan, “will update the Hyogo Framework for Action (HFA) based on the experience of the last 10 years, including Yolanda, with the overall objective of reducing mortality and economic losses.”

The HFA, the global blueprint for disaster risk reduction, was adopted by UN member states in 2005 after the Indian Ocean tsunami took more than 227,000 lives in 14 countries in the region.

“Among other things, this will require a strong focus on better standards of housing for the poor and a huge effort to protect or move millions of people out of danger zones along storm and flood-exposed coasts, riverbanks, unstable hillsides and seismic zones,” she asserted.

Wahlstrom emphasized “organization and understanding of what drives risk are essential to building resilience.”

“A new universally accepted agreement on climate change will help to avoid the creation of new risks, and a comprehensive new set of sustainable development goals will provide the world with the necessary guidance for improving the lot of humanity,” she said.

Wahlstrom said Yolanda was an “object lesson on how poverty and disasters are intertwined. The strongest storm ever to make landfall affected the poorest of the poor the most.”

Why so many died

“Typhoon Haiyan claimed [more than] 6,000 lives on Nov. 8, 2013, when it made landfall six times as it crossed the Philippine archipelago, destroying more than 1 million homes and affecting 14 million people, leaving many homeless, injured and children orphaned. It cost the country $12 billion in economic losses,” she said.

Tacloban, she noted, “was the storm’s epicenter. It destroyed schools, health facilities, housing, places of work, the airport and other critical infrastructure spread out along the exposed coastline.”

“The location of housing and key infrastructure exposed them to the full impact of the storm and vulnerability was increased by the poor quality of construction. The city also experienced typhoons in 1897 and 1912, which killed some 22,000 people,” she said.

Wahlstrom cited “reasons why many people died in an age of advanced weather forecasting varied.”

“Many poor communities refused to leave their shanties because they were afraid they would not be allowed to return. Some did not understand what a tidal surge was. Some did not believe the warnings because there was no obvious change in the weather prior to the storm’s arrival. Others did not move to evacuation centers because they felt safer in their homes,” she said.

“Additional efforts are needed to build back better, including stronger livelihood, government safety nets for the poor, more resilient infrastructure and local governments with more capacity. It is vital future investments on social development, along with new infrastructure, that will improve people’s resilience and avoid the creation of new risk in line with the priorities of the Hyogo Framework for Action,” she said.