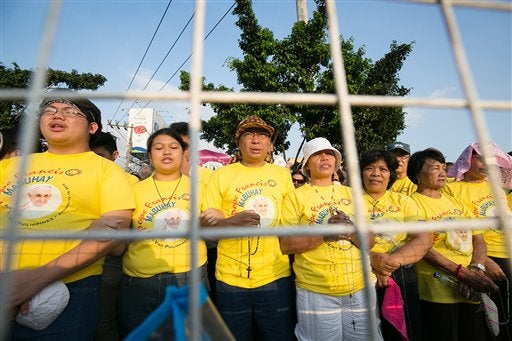 A group of Filipino volunteers pray the rosary along Roxas Boulevard in Manila, Philippines as they wait for the arrival of Pope Francis, who arrived on Thursday, Jan. 15, 2015 to begin his Apostolic visit. AP

MANILA, Philippines–Pope Francis said he might not be able to personally condole with thousands of victims of calamities desiring to meet him during his visit to the Philippines, but he emphasized that he would always be for the poor and the suffering.

“The center, the core of my message is the poor,” the Pope said during a press conference aboard the Sri Lankan Airlines flight that took him from Colombo to Manila for the final leg of his two-country apostolic trip of Asia.

He paid tribute to Filipino Catholics, many of them poor, for holding fast to the faith that has made the Philippines the dominant Christian nation in Asia.

The Pope has come to the Philippines to console victims of Supertyphoon “Yolanda” (international name: Haiyan) in Eastern Visayas.

He will fly to Tacloban City on Saturday to meet representatives of the typhoon victims as well as the survivors of the Oct. 15, 2013, earthquake in Bohol province that killed 200 people and destroyed churches.

Although many people would like to meet the Pope, organizers of the papal visit said not everyone could be accommodated.

The Pope said he did not want to send “a simplistic message.”

“The center, the core of my message is the poor, the poor who have suffered Yolanda and the poor who suffer the consequences,” he said. “The poor—many of whom suffer social, spiritual and existential injustices.

“I think of them,” he stressed.

He said the Oriental churches in Rome recently celebrated their own Feast of the Nativity in Rome in which Filipinos were invited, and he was impressed with their sense of sacrifice—braving foreign lands to work and earn a living for their families back home amid difficult conditions.

Pope Francis paid tribute to Filipinos for their fidelity to Christianity despite conflicts, disasters and the economic diaspora that has seen them working in foreign lands often amid very trying conditions.

“It is the poor who have faith and hope in the commemoration of the 500th year of preaching the Gospel in the Philippines,” he pointed out.

He may have made a slight error in the number of years of Christian evangelization, but the Pope impressed Filipino journalists on the plane for making a reference to a key celebration in the life of the Church in the Philippines this year.

This year, the Church is marking the 450th anniversary of Christian evangelization that started with the return of the Spaniards in 1565.

The successful expedition of the Spaniard Miguel Lopez de Legazpi in 1565 is taken by historians as the start of the Latin European colonization and Christian evangelization of the Philippines.

That year, the Augustinian missionaries arrived with Legazpi whose expedition recovered the image of the Santo Niño in Cebu province that had been given by Magellan to local chief and his family who converted to Christianity in 1521.

It was 1521 that seems to have been the guidepost that the Pope took to say that the nation is celebrating the 500th year of Christianity in the Philippines.

Fr. Federico Lombardi, SJ, the Vatican press spokesman, later clarified that the Pope was referring to the “start of the celebration of the fifth centenary” of Christianity in the Philippines.

During the press conference, Pope Francis said he did not dismiss threats to his life when he would conduct apostolic tours. He added he gets regular security updates during tours.

But threats should not stop him from his ministry.

“I leave my life in the hands of God,” he said. He added he constantly prayed to God that if something bad should happen, “to make it quick because I am not good in facing pain.”

But he reiterated his condemnation of terrorism, especially in the aftermath of the “Charlie Hebdo” incident which he called “abhorrent” and “naked terrorism.”

But he struck a balance between freedom of expression and religious freedom, which he called “both fundamental rights.”

He said freedom of expression “has limits.”

The Pope added he condemned the use of children in terrorism, especially “children suicide bombers.”

Asked about whether he supported the setting up of a truth commission to investigate, for example, abuses that may have been committed in the anti-Tamil insurgency campaign in Sri Lanka, the Pope said he could not make a “general statement.”

On Tuesday, in his arrival address in Colombo, the Pope urged peace and reconciliation for the Sri Lankan nation in the aftermath of the crushing of the Tamil insurgency in 2009.

But he also said that the ends of truth and justice should also be served.

Explaining his position, the Pope said he was well-acquainted with the Truth Commission that was set up to investigate military and official abuses during the Argentinian dictatorship.

He added that he supported “all efforts to find the truth and all efforts that are balanced, [finding the truth] not as revenge, but toward understanding.”

The Pope said he had a discussion with new Sri Lankan President Maithripala Sirisena who had impressed him.

He said Sirisena wanted “to move on” by fostering “harmony.”

Francis is due to visit Philadelphia for a world gathering of Catholic families. He is also expected to visit New York to address the United Nations, and Washington to meet US President Barack Obama.