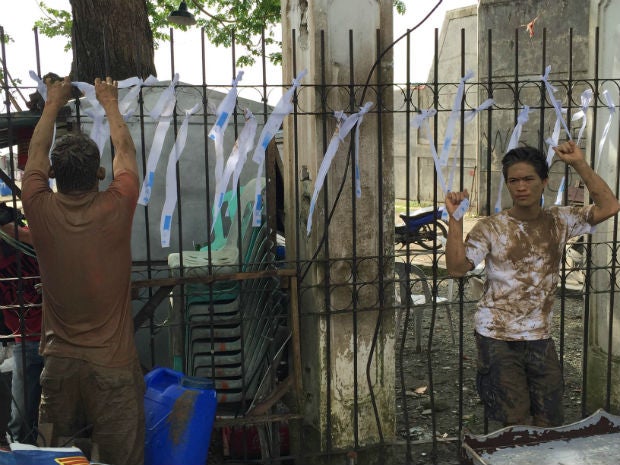 TACLOBAN CITY, Philippines — Militant survivors of Supertyphoon Yolanda (international name: Haiyan) on Thursday tied white ribbons bearing the face of Pope Francis, calling for the Pontiff to compel the Philippine government to address the demands  of the victims.

Doused in mud, around 10 young survivors tied the ribbons to protest the government’s alleged failure to help the victims.

Ebok Delaogdon, one of the protesters in mud, said their look is meant to show the Pope the tragedy that hit Tacloban.

The coastal city was flattened by storm surges during the typhoon’s onslaught.

Sister Editha Eslopor, former chairperson of the militant umbrella group People’s Surge, said government did not even take notice of their request to have their members join the Pontiff in his lunch with Yolanda victims.

“These are real victims of the disaster and yet we are not invited to the lunch with Pope Francis… Gusto namin ipaabot kay Papa ang kailangang panawagang tulong,” Sister Eslopor said.

Pope Francis is expected to arrive in Leyte on Saturday, Jan. 17, to have lunch with at least 30 victims of Yolanda as well as of the 7.2-magnitude earthquake in Bohol.

He is also set to hold a mass at the Tacloban Airport before an estimated crowd of 120,000. The Pontiff will also bless the Pope Francis Center in Palo.