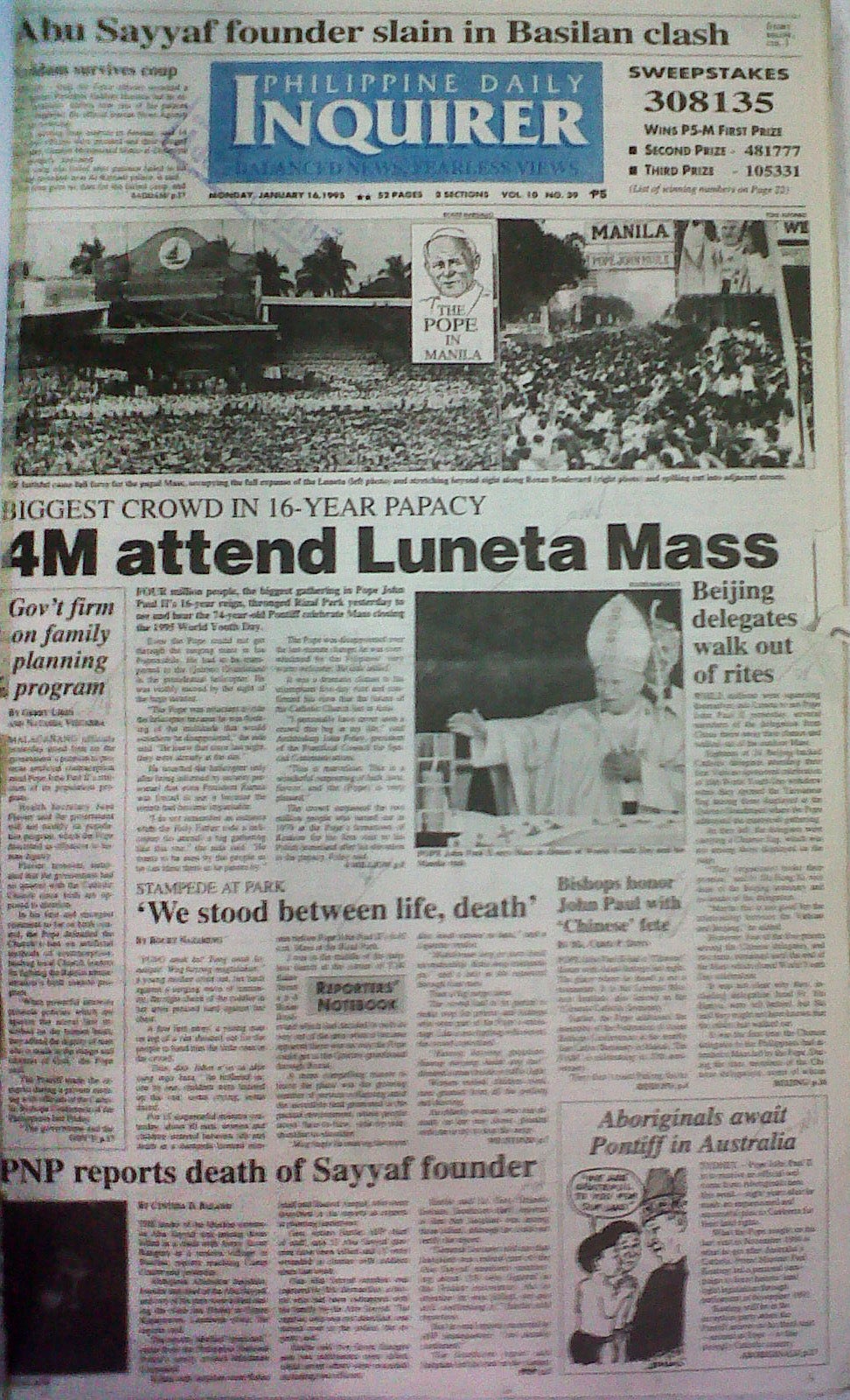 Even the Pope could not get through the surging mass in his Popemobile. He had to be transported to the Quirino Grandstand in the presidential helicopter.

He was visibly moved by the sight of the huge turnout.

“The Pope was reluctant to ride the helicopter because he was thinking of the multitude that would somehow be disappointed,” the aide said.

“He knew that since last night, they were already at the site.”

He boarded the helicopter only after being informed by security personnel that even President Ramos was forced to use it because the streets had become impassable.

“I do not remember an instance when the Holy Father rode a helicopter (to attend) a big gathering like this one,” the aide said.

“He wants to be seen by the people so he can bless them as he passes by.”

The Pope was disappointed over the last-minute change, he was overwhelmed by the Filipinos’ very warm welcome, the aide added.

It was a dramatic climax to his triumphant five-day visit and confirmed his view that the future of the Catholic Church lies in Asia.

“I personally have never seen a crowd this big in my life,” said Archbishop John Foley, President of the Pontifical Council for Special Communications.

“This is marvelous. This is a wonderful outpouring of faith, love, fervor, and the (Pope) is very pleased. The crowd surpassed the two million people who turned out in 1979 at the Pope’s hometown of Krakow for the first visit to his Polish homeland after his elevation to the papacy,” Foley said.

It also dwarfed the million or so who faced down tanks and guns in the February 1986 uprising that toppled the strongman Ferdinand Marcos from power.

And the two million who rallied behind Cory Aquino at the Luneta after the snap elections.

People started massing at the Rizal Park as early as midnight Saturday, swelling the one-million crowd that attended the WYD delegates’ sunset vigil at the 20-hectare Rizal Park.

Among those who came for the Mass were delegations from the provinces, some coming from as far north as Vigan.

In his homily, the Pope roused the youth of the world to “heal and transform society” and to participate in God’s mission “in a unique and personal way.”

He urged them to respect the “beautiful gift of sexuality” and to resist the lure of alcohol and drugs as well as “peer pressure and . . . the pervasive influence of trends and fashions publicized by the media.”

As in the previous day, the Pope called on Filipinos “to play a fuller role in the Church’s elevating and liberating service to the human family.”

The themes of “mission” and “becoming apostles” prevailed in the Pope’s homilies and speeches in the past days.

His constant quote from the Bible was “As the Father has sent me, so do I send you.”

At the 1993 WYD celebration in Denver, the theme was “newness of life.”

According to an aide, the Pontiff had insisted on using the Popemobile to get to the Rizal Park.

“There is no security problem,” said Vatican spokesperson Joaquin Navarro-Valls as officials tried to decide on how to get the Pope to the park. “This is an excess of success.”

In a statement issued later in the day, Navarro-Valls said cancelling the Mass due to security risks was never considered.

“The Pope truly has a big heart,” he said. Navarro-Valls added that the turnout was estimated at five million.

From the Apostolic Nunciature on Taft Avenue, the Pontiff arrived at Malacanang Park aboard the Popemobile at 9:20 a.m., where he was greeted by the families of members of the Presidential Security Group.

They waved copies of his photograph and raised rosaries and images of Jesus Christ and the Blessed Mother for his blessing.

He then boarded the helicopter along with Manila Archbishop Jaime Cardinal Sin and Papal Nuncio Gian Vincenso Moreni.

The President arrived at the grandstand on board the same helicopter at exactly 9 a.m. He was accompanied by his daughter Angel, her husband Norman Jones, and Ambassador Lolita R. Haney.

After mounting the podium, the Pope stared out at the pennant-waving throng which stretched as far as he could see.

His face was almost devoid of expression, and his lips quivered as if he were talking to himself.

But he seemed to respond to the warmth of the crowd as the Mass continued.

At the end of the Mass, the multilingual Pope delivered special farewell messages in 13 languages, including Filipino.

He was brought back by the same helicopter to Malacanang Park, where he boarded the Popemobile for the trip to the San Carlos Seminary in Makati.

The Pope called the world’s youth the “hope for the future” on which will depend the coming Third Millennium which he described as “a marvelous epoch for humanity but which also raises not a few fears and anxieties.”

“Build your lives on the one model that will not deceive you,” he urged the youth.

“I invite you to open the Gospel and discover that Jesus Christ wants to be your friend.”

He challenged the Christian laity to do its part.

He called on “people who till the soil, factory workers, engineers, technicians, doctors, nurses and health care personnel, teachers, men and women in the legal profession, those who serve in public life.”

He also challenged “writers, people who work in the theater and cinema and the media, artists, musicians, sculptors and painters” to take part in the mission.

Again addressing the youth, the Pope added “one specific challenge and appeal, which involves the healing of a source of immense frustration and suffering in many families all over the world.”

Gratitude toward parents He said: “Parents and older people sometimes feel that they have lost contact with you, and they are upset, just as Mary and Joseph felt anguish when they realized that Jesus had stayed behind in Jerusalem.

He exhorted both parents and children “to build bridges of dialogue and communication.

Young people from all over the world, including a black youth clad in a g-string, presented offerings at the Mass.

A young man from the Netherlands read the manifesto of the International Youth Forum.

The main concelebrants of the Mass were Sin, Cebu Archbishop Ricardo Cardinal Vidal, Vatican Secretary of State Angelo Cardinal Sudano, and Eduardo Cardinal Pironio, head of the Pontifical Council for the Laity.

Hundreds of cardinals, bishops and priests also served as concelebrants.

Scores of people who had been waiting for the Pope started leaving Rizal Park when they learned he had taken a helicopter.

“Why should I stay when I won’t see him, after all?” said an elderly woman. “I just came here to see the Pope.”

By the time the Mass started, the crowd in front of the Manila Hotel had shrunk to a third of its original size.

More than 100 children aged seven and below were reported missing while thousands suffering from intense heat and cold collapsed in the mass camp-out at the Nunciature and Rizal Park from Saturday night to Sunday morning.

As of 5:30 p.m. yesterday, the Department of Health counted 1,720 persons who were brought to emergency medical stations at the park.

Criselda Tungcol, 19, a WYD delegate from San Juan, Metro Manila, was rushed to the Polymedic General Hospital in Mandaluyong after suffering spasms at Rizal Park. She has since been discharged.

Although the Pope looked very tired and lost in thought as he arrived for a Sunday evening meeting with Asian bishops, aides said his Manila reception was just what he needed to help get through the loss of his former active lifestyle.

“That kind of change is difficult psychologically and this trip has helped him come to peace with himself about this new phase in his life,” the aide added.

“It has recharged his batteries.” With INQUIRER wires