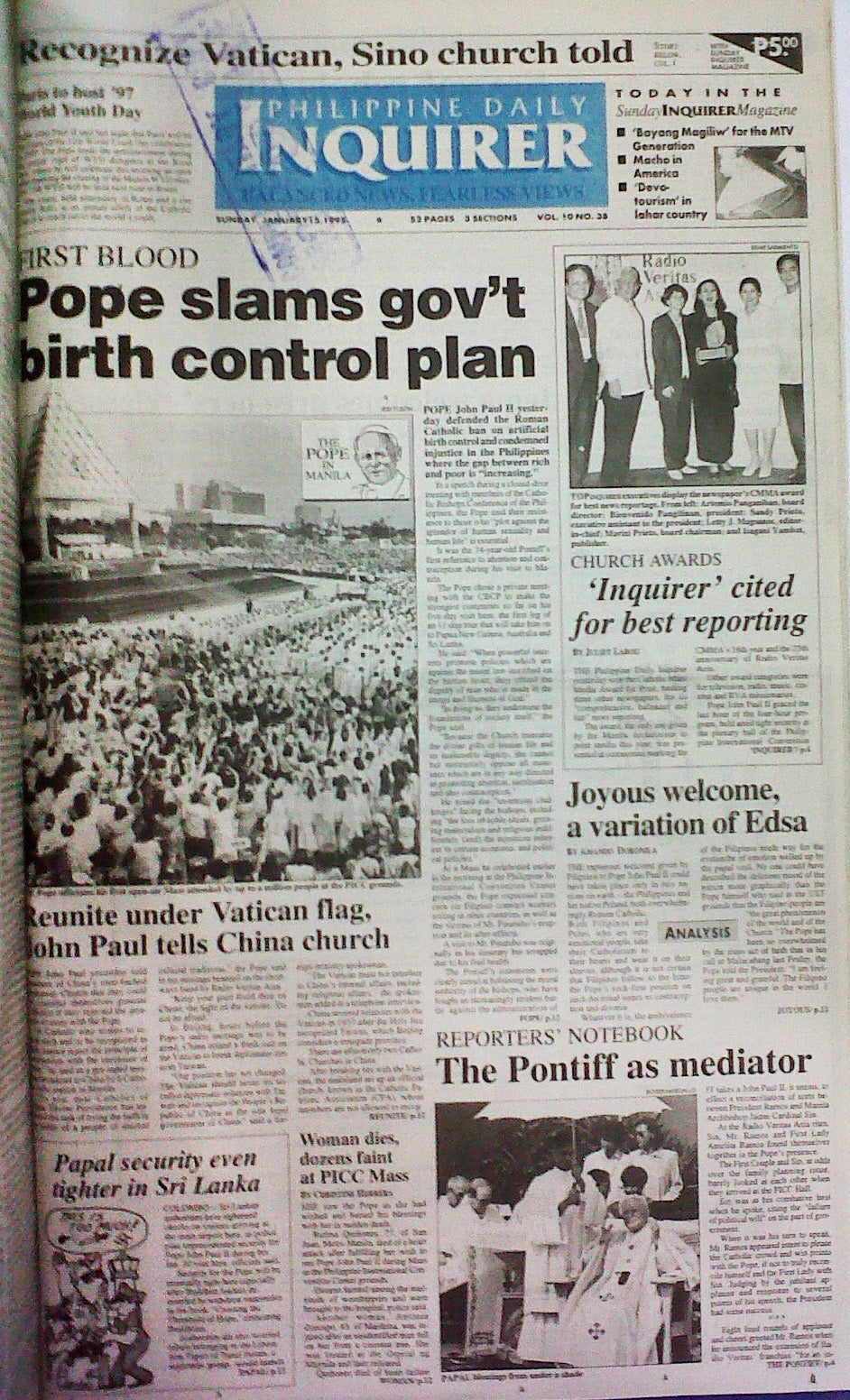 Pope John Paul II yesterday defended the Roman Catholic ban on artificial birth control and condemned injustice in the Philippines where the gap between rich and poor is “increasing.”

In a speech during a closed-door meeting with members of the Catholic Bishops Conference of the Philippines (CBCP), the Pope said their resistance to those who “plot against the splendor of human sexuality and human life” is essential.

It was the 74-year-old Pontiff’s first reference to abortion and contraception during his visit to Manila.

The Pope chose a private meeting with the CBCP to make the strongest comments so far on his five-day visit here, the first leg of an 11-day tour that will take him on to Papua New Guinea, Australia and Sri Lanka.

He said: “When powerful interests promote policies which are against the moral law inscribed on the human heart, they offend the dignity of man who is made in the image and likeness of God.”

“In doing so, they undermine the foundations of society itself,” the Pope said.

“Because the Church treasures the divine gifts of human life and its inalienable dignity, she cannot but strenuously oppose all measures which are in any way directed at promoting abortion, sterilization and also contraception.”

He noted the “enormous challenges” facing the bishops, including “the loss of noble ideals, growing materialism and religious indifference, (and) the injustices inherent in certain economic and political policies.”

At a Mass he celebrated earlier in the morning at the Philippine International Convention Center grounds, the Pope expressed concern for Filipino contract workers toiling in other countries, as well as the victims of Mount Pinatubo’s eruption and its after-effects.

The Pontiff’s comments were clearly aimed at bolstering the moral authority of the bishops, who have fought an increasingly strident battle against the administration of President Ramos over its family planning program.

Mr. Ramos and the Pope met last Friday to discuss social issues, but neither the Vatican nor Malacanang provided details of the conversation.

Mr. Ramos said in a statement the meeting was marked by a “frank exchange of views.”

The Church, which represents about 85 percent of the Philippines’ 65 million population, has been outraged by government efforts to curb a high birth rate by encouraging couples to use both natural and artificial contraception to plan their families.

It has protested the health department’s promotion of condoms as way of fighting the spread of AIDS.

Manila Archbishop Jaime Cardinal Sin has singled out for his most stinging attacks the architect of the family planning program, Health Secretary Juan Flavier.

In his speech to the CBCP, copies of which were sent to media offices, the Pope urged the bishops to “help create a new attitude, a conviction shaped by the principle of the social purpose of power and wealth, which can lead to appropriate changes in the prevailing order.”

“Too many families remain without land to till or a home to live in, and too many people are without employment and basic services,” he said.

The Pope acknowledged what the bishops had earlier written at the Second Plenary Council of the Philippines — that “a situation where economic wealth and political power are concentrated in the hands of the few is . . . an affront to human dignity and solidarity.”

The Pope’s comments reflected the Church’s unwavering rejection of all artificial contraception, reiterated last year in his Letter to Families wherein he said civilization itself was under threat.

But a recent survey by researchers at the University of the Philippines showed that many Filipinos did not accept the Church’s pronouncements on contraception.

Around 98 percent of the 4,000 couples surveyed said they supported the government’s population policies.

More than three-quarters said they would not be swayed by Church teachings on the issue.

In his homily during the Mass marking the 4th centenary of the Archdiocese of Manila and the dioceses of Caceres, Nueva Segovia and Cebu, the Pope reiterated the missionary role of the Philippines and the Filipino youth.

He traced the history of the Philippines’ Christianization, noting the difficulties it suffered under “conquistadores” and “encomenderos,” and lauded the efforts of the first missionaries.

The work of these missionaries — the Augustinians, Franciscans, Dominicans, Jesuits, and Augustinian Recollects — have borne fruit, the Pope said.

Now “it is the Philippines which enjoys the greatest wealth of ecclesiastical life,” he added.

The Pontiff referred to the family and the home a number of times in his 30-minute homily.

He told the faithful that “in forming Christian families, and by educating (their) children in the faith,” they help lay the foundations of “the only predominantly Catholic country in this part of the world.” With a report from Reuters