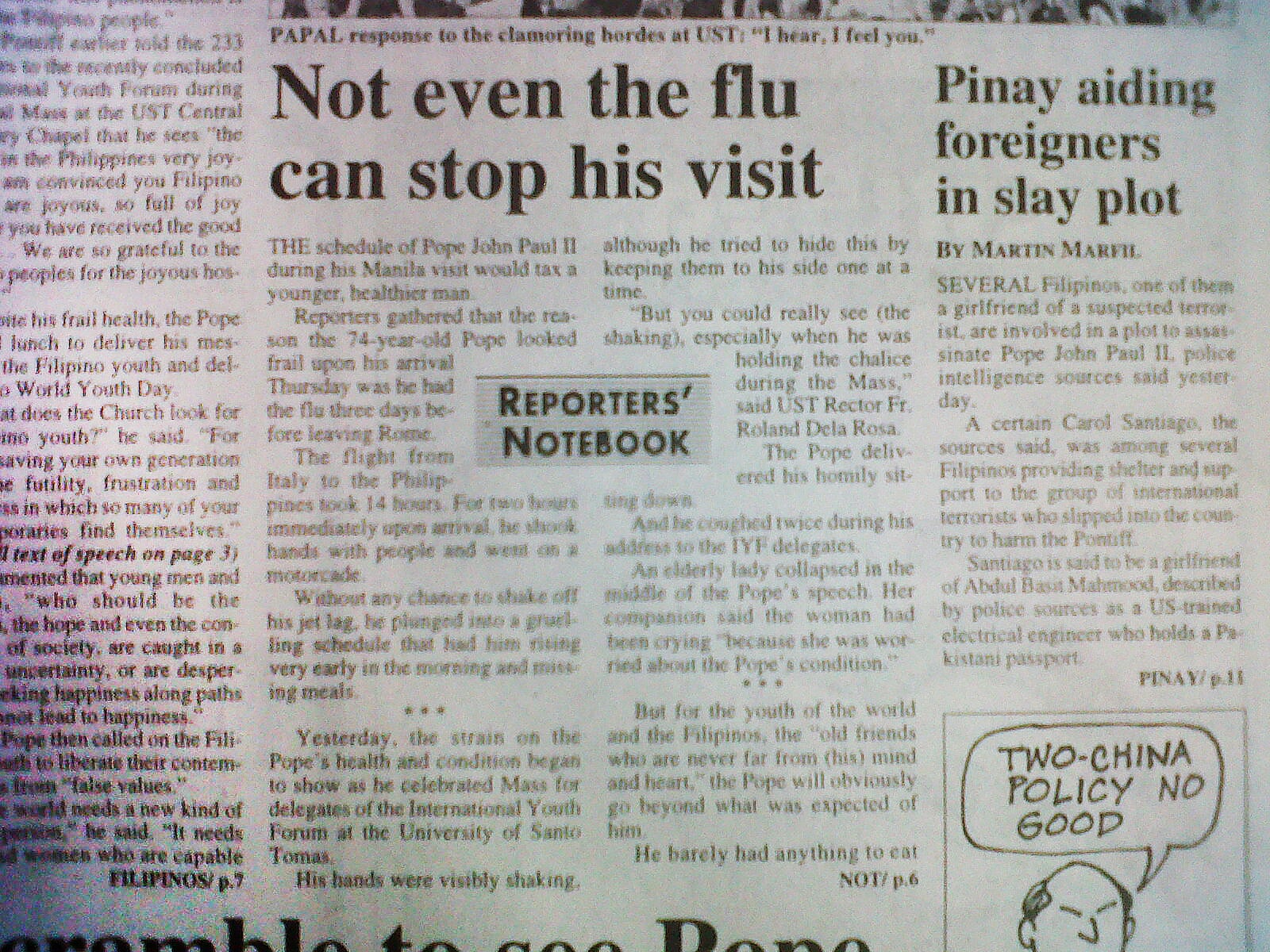 The schedule of Pope John Paul II during his Manila visit would tax a younger, healthier man.

Reporters gathered that the reason the 74-year-old Pope looked frail upon his arrival Thursday was he had the flu three days before leaving Rome.

The flight from Italy to the Philippines took 14 hours.

For two hours immediately upon arrival, he shook hands with people and went on a motorcade.

Without any chance to shake off his jet lag, he plunged into a gruelling schedule that had him rising very early in the morning and missing meals.

* * * Yesterday, the strain on the Pope’s health and condition began to show as he celebrated Mass for delegates of the International Youth Forum at the University of Santo Tomas.

His hands were visibly shaking, although he tried to hide this by keeping them to his side one at a time. “But you could really see (the shaking), especially when he was holding the chalice during the Mass,” said UST Rector Fr. Roland Dela Rosa.

The Pope delivered his homily sitting down. And he coughed twice during his address to the IYF delegates. An elderly lady collapsed in the middle of the Pope’s speech.

Her companion said the woman had been crying “because she was worried about the Pope’s condition.”

* * * But for the youth of the world and the Filipinos, the “old friends who are never far from my mind and heart,” the Pope will obviously go beyond what was expected of him.

He barely had anything to eat since leaving the Apostolic Nunciature at 8:45 a.m. up to the time he ended his dialogue with IYF delegates at 1:30 p.m.

At the Mass, the Pope stood for so long as he gave communion. He stood even longer afterward, as he personally met with all 233 IYF delegates for one hour and 15 minutes.

He also decided to deliver his message to the students on his feet. And to the dismay of his security and aides, he insisted on walking up a 15-meter ramp instead of allowing himself to be “lifted” to the stage for his message.

Dela Rosa said the Pope’s stamina seems to spring from his “all-out display of affection.”

“I think that’s his therapy and that’s what keeps him going,” the rector said.

* * * Most of all, his humor never seems to desert him. Arriving 15 minutes late at UST, the Pope was bombarded with loud chants of “Pope John Paul II, we love you!”

Upon reaching the stage, he went to the microphone and cheered back: “Pope John Paul II, he loves you too. Loud and clear, I hear and I feel.”

During the homily, the Pope adlibbed about how he was so “anxious” to personally meet the IYF delegates after Mass.

But the Polish-born Pontiff who speaks eight languages apparently realized that “anxious” was not the right word to describe his feelings.

“No, it is not true,” the Pope said after his homily. “I am not anxious. I am only eager.”

He departed anew from a prepared speech when he spoke before the delegates.

In the middle of the speech, the Popespoke about how grateful he was for the Filipinos’ hospitality, and how the people’s warm welcome has given him immense joy.

As if to stress that all these were impromptu remarks, the Pope then quipped: “Return to the text.”

* * * But the man is not all pleasantness and good humor, if a report of Esquire magazine, as quoted by a US embassy staffer, is to be believed.

“Never ever piss off the Pope or any member of his staff,” was the staffer’s advice to presidential guards and policemen assigned to the Pontiff.

Apparently, anyone who does so will most likely suffer the fate of Steve “the Rabbi” Rabinowitz, US President Bill Clinton’s former aide in charge of photo opportunities.

An Esquire report on the “Rabinowitz incident,” which took place during the 1994 papal visit to the United States, said the Pope sent Clinton a handwritten note complaining about Rabinowitz.

In his note, the Pope said something to the effect that in all his years of world travel, never has a member of his staff been treated as rudely as one of his photographers.

The lensman turned out to be the Vatican secretary of state. Said Esquire: “The Rabbi pursued other employment opportunities soon thereafter.

And based on the Pope’s connections, there’ll probably be some more hell to pay.”

* * * Practically everyone involved in papal-visit preparations seems to have turned praning (paranoid), what with all the talk of terrorists and assassination plots.

Yesterday morning, about the same time that thePope was supposed to be on his way to Malacanang, two traffic aides accosted a teenager flying a kite near A. Lacson Street in Sampaloc.

A bystander quoted one of the fidgety aides as berating the boy, “Amin na `yan, baka may bombang kasama `yan (Hand that over, there could be a bomb in that).”

The aide confiscated the kite which was emblazoned with “Lolek, Welcome to RP.”

He was apparently unaware that Lolek is the Pope’s nickname.

* * * On his second day here, people still can’t get enough of the Pope. And the feeling seemed mutual. Before saying Mass inside the UST Chapel, the Pope looked out the window to the huge crowd that gathered at the parade grounds, but only a few noticed him.

He turned to leave just as the crowd realized that the man in a mitre was actually the Pope. Instantly, the crowd was on its feet, shouting the Pope’s name and waving small flags.

It was enough to bring thePope back to the window, where he lingered for a while to enjoy the crowd’s reaction.

* * * Tanzanian Michael Mathias Mtui, an IYF delegate, was beside himself after talking with the Pope. “He was just like my father. He said `God bless you’ and I was just overwhelmed,” Mtui said.

Belgian Bert Van Den Dossche was also in a daze to have been counted among the few allowed to talk to the Pope. He said thePope instructed him that “as the Father has sent me, so am I sending you.”

Ana Delmy Mejia from El Salvador, not fluent in English, could only say “alegria (happy)” and “triste (sad)” to describe her meeting with the Pope.

* * * Manila City Hall employees were disappointed that the Popemobile took the Nagtahan Bridge route, instead of passing in front of their building, en route to the nunciature from UST.

“Napakasuwerte naman ng tulay na ‘yan, (How lucky can that bridge get),” said one employee.

* * * At the Nunciature where the Pope is staying, the crowd simply won’t leave.

On his first night, hundreds camped in front of the Nunciature up to 11 p.m. without taking their eyes off the balcony in the hope that he would emerge.

Last night, there was an even bigger crowd especially as several choral groups serenaded the Pontiff with Filipino and secular music.

The Pope rewarded the public with a 20-minute appearance on the balcony, during which he thanked the singers, praised their voices and asked them to sing more songs.

The singers, with the crowd joining this time, ecstatically launched into “Alleluiah” from Handel’s Messiah and “The Lord’s Prayer.”

Long after the singing was over, the Pope was still basking in the crowd’s adulation.

On live television, his aides looked like they were pulling him back into the room.

* * * Possibly the luckiest Filipino family to have a private audience with the head of the Roman Catholic Church is surnamed Ramos and is Protestant.

The family members got their chance after the one-on-one meeting between President Ramos and the Pope in Malacanang.

Sam, son of eldest Ramos daughter Angel Jones, told the Pope: I want to ride in an airplane.” The Pope replied, “I want to go with you,” and kissed the boy.

Another presidential daughter, Cristy Jalasco, said of the audience: “Inspired kami siyempre, in spite of our being Protestant. I don’t think that makes a difference.”

First Lady Amelita Ramos said: “You feel very good inside because he is a man of faith and has a pleasant personality. He unites the people and so I feel very good about his visit.”

After a quick photo session, the First Couple presented several gifts to the Pope, among them: a new compilation of Mr. Ramos’ policy speeches, which carried a picture of the Ramoses and the Pope taken last year at Castel Gandolfo; a wood carving of Madonna and Child and the children of the world by Fred Baldemor of Paete, Laguna; and a bronze statue of San Lorenzo Ruiz, who was beatified during thePope’s 1981 visit.

The Pope in turn, presented the Ramoses a giant mosaic portrait of Jesus Christ. He also autographed their copy of the Castel Gandolfo photo.

* * * Politicians, too, cashed in on the Pope’s crowd-drawing power. At UST, Sen. Ernesto Maceda went up the grandstand and shook hands with some of those present.

He is also among the lucky 70 to receive communion from the Pope in today’s Mass at PICC. Sen. Gloria Arroyo, seated with her father, former President Diosdado Macapagal, and Chief Justice Andres Narvasa, was also visible. She stood up and waved to the crowd and was jeered instead.

Even her holding an umbrella for her father drew nasty remarks from people who were fighting below for a vantage view of the Pope.

* * * The INQUIRER was properly chastised when a reader faxed a clipping of three stories which showed the Pope as having been in three kinds of aircraft at one time.

In Friday’s issue, the main story said the Pope rode an Alitalia DC-10, the Reporters’ Notebook said he came in an Alitalia Airbus, and a wire report said he arrived on an Alitalia 747.

A belated check showed none of the three stories got it right. The Pope’s aircraft was an Alitalia MD-11.

What can we say? That we are not infallible. Apologies.