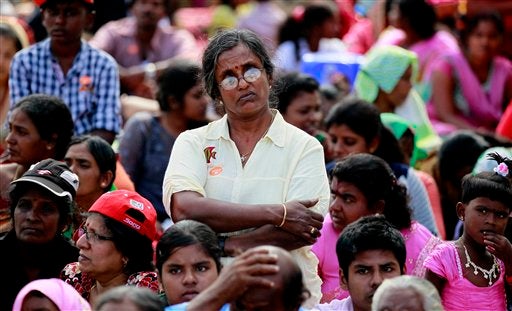 Sri Lankan Catholics wait for the arrival of Pope Francis at the church premise of Our Lady of Madhu in Madhu, northern Sri Lanka, Wednesday, Jan. 14, 2015. AP PHOTO/Eranga Jayawardena

COLOMBO – Tens of thousands of Sri Lankans, many of them Buddhists and non-Christians, attended the Mass on Wednesday morning in which Pope Francis canonized the island-country’s first saint, Joseph Vaz.

Christians comprise 10 percent of the 21 million population; of that 70 percent are Catholic.

Sinhalese Buddhists are the majority, with the Tamil Hindus a sizeable minority.

On Tuesday, when the Pope arrived, crowds lined up the streets where the Pope held his motorcade.

He admitted the Pope was visibly tired after the long ride but dismissed speculations he was sick.

Whatever speculations about his health were dismissed when the Pope appeared Wednesday morning for the canonization Mass, smiling and waving at everyone.

At one time he was introduced to elderly disabled whom he greeted and blessed.

During the Mass, the Pope canonized Joseph Vaz, an Oratorian priest from Goa, India in the 17th century who helped rebuild the Church in Sri Lanka despite the persecution of the Protestant Dutch.

The Pope offered Vaz as an inter-religious missionary. “St Joseph Vaz knew how to offer the truth and beauty of the Gospel in a multi-religious context.”

Bells pealed and chimes played when the Pope read the canonical formula declaring Vaz a saint.

The Mass was so successful that Colombo Cardinal-Archbishop Malcolm Ranjith declared Sri Lankans “admirers” of the Pope.

“I must say that joining the millions of your admirers in the world,” Ranjith told the Pope, “our own people, Sri Lankans of every religion, race and social color, have welcomed your pastoral visit to our little island home with deep respect and love.”

The Pope will visit the Shrine of Our Lady of the Rosary in Madhu Wednesday afternoon.

On Thursday he will leave for the overwhelmingly Catholic Philippines where he’s expected to be mobbed and cheered at every event,

The last papal visit of the country was in 1995 when Pope, now Saint, John Paul II held the Mass for World Youth Day that drew five million people.

Apostolic Nunciature and Nuncio: The Pope’s official residence and envoy in PH