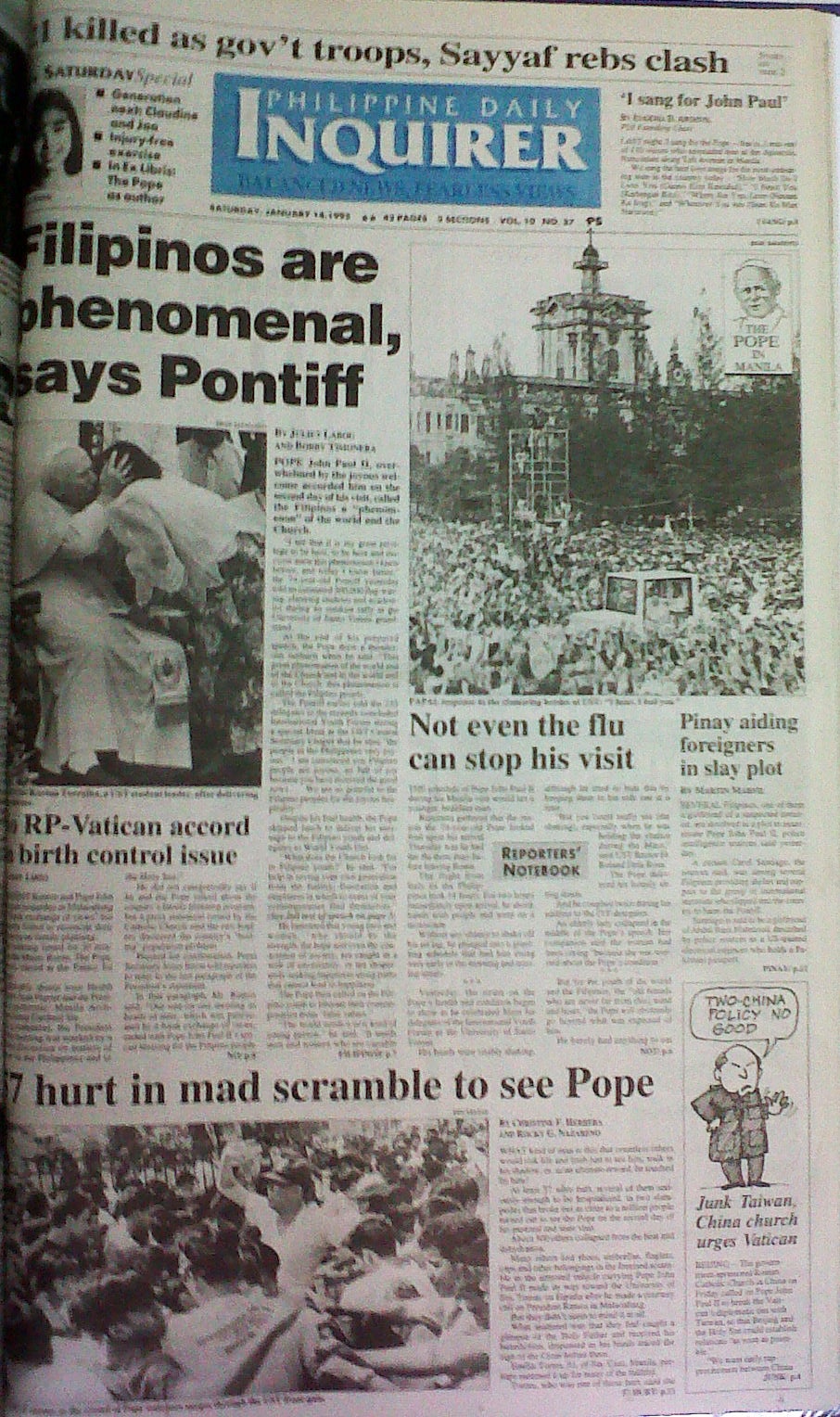 Pope John Paul II, overwhelmed by the joyous welcome accorded him on the second day of his visit, called the Filipinos a “phenomenon” of the world and the Church.

“I see that it is my great privilege to be here, to be here and discover anew this phenomenon I knew before, and today I know better,” the 74-year-old Pontiff yesterday told an estimated 200,000 flag-waving, cheering students and academics during an outdoor rally at the University of Santo Tomas grandstand.

The Pontiff earlier told the 233 delegates to the recently concluded International Youth Forum during a special Mass at the UST Central Seminary Chapel that he sees “the people in the Philippines very joyous.”

I am convinced you Filipino people are joyous, so full of joy because you have received the good news . . . We are so grateful to the Filipino peoples for the joyous hospitality.”

Message to the youth

Despite his frail health, the Pope skipped lunch to deliver his message to the Filipino youth and delegates to World Youth Day.

“What does the Church look for in Filipino youth?” he said.

“For help in saving your own generation from the futility, frustration and emptiness in which so many of your contemporaries find themselves.” (See full text of speech on here)

He lamented that young men and women, “who should be the strength, the hope and even the conscience of society, are caught in a web of uncertainty, or are desperately seeking happiness along paths that cannot lead to happiness.”

The Pope then called on the Filipino youth to liberate their contemporaries from “false values.”

“The world needs a new kind of young person,” he said.

“It needs men and women who are capable of self-discipline, capable of committing themselves to the highest ideals, ready to change radically the false values which have enslaved so many young people and adults.”

He was late about 10 minutes for an earlier meeting with President Ramos at Malacanang because of the large crowd gathered outside the Apostolic Nunciature, where he is staying.

The Pope was to have motored to the Palace by limousine. But thousands of Filipinos were gathered outside the Nunciature chanting, “We want to see the Pope.”

Some slept on the sidewalk all night, hoping to get a glimpse of the Pope.

The Popemobile which had been sent ahead to Malacanang returned to the Nunciature so the crowds could see John Paul along the route to Malacanang.

As he proceeded to the UST campus, scores were hurt while jostling for a view of the papal motorcade.

He said the Filipino youth face the “enormous task” of spreading the word of God and urged them to live their lives with a “sense of vocation.”

The World Youth Day, the Pontiff said, is an occasion for the youth to discover their calling — be it a call for marriage and family life, or to the priesthood or religious life.

He made special mention to seminarians, novices and young religious present at the Mass “to be steadfast in answering the call to a total self-giving love of the Lord.”

`Do not be afraid’

The Pope warned that God will require from them their “fullest commitment” in spreading the Gospel.

“But do not be afraid!” he said. “His demands are also the measure of his love for each of you personally.”

The Pope also assured the youth of “fulfillment and happiness” to those who work for Christ.

The solemn and intimate atmosphere at Mass was a stark contrast to the exuberant throngs at the UST parade grounds.

Just about every space in the seven-hectare area was filled with spectators with thousands more perched on the long waiting shed in the middle of the campus and the streets that bordered the football field.

There were also about 10,000 more which packed the sidewalks of Espa¤a on both sides from Morayta to M. Dela Fuente streets.

Upon reaching the UST Grandstand, the crowd shouted repeatedly: “JohnPaul II, we love you!” He replied: “I hear and I feel.”

In his speech, the Pope told the crowd: “The world and the Church need young people who know that the beauty of living consists in giving oneself to others, in doing good to others.”

The Pope coughed twice during his 20-minute speech, which was also interrupted by wild applause at least 12 times.

At the end of his prepared speech, the Pope drew thunderous outburst from the crowd when he said: “I see that it was my great privilege to be here, to be here and discover anew this phenomenon I knew before, and today I know better.”

“Thank you, thank you,” the crowd shouted back to thePope. When he was about to leave, he again responded to the cheers: “John Paul II, he loves you. He tries to bring you blessing.” Then he gave his benediction in Latin.

At the tent city in Intramuros, World Youth Day delegates said the Pope’s message posed a challenge for them to focus on spiritual priorities and take their minds off “earthly things.”

Tara Moore, a 19-year-old nursing student from Australia, advised the members of her generation to maintain open lines of communication with God through prayers.

She said prayers “bring us closer to God and this is one way God comes close to us individually to tell us the missions He wants us to fulfill.”

Ruth Rosero, 18, of Centro Escolar University said many young people are led astray because “we are living in very confusing times.”

Mike Blasco, an industrial psychology major at the Rizal Technological Colleges, said the problem is compounded by the youth’s passivity in the face of greater freedom enjoyed in choosing the vocations they should pursue.

“The youth has been passive for so long, that’s why they get swallowed by the system. It’s about time to prove that we can change the system by taking an active part in the fields we want to go into. There is so much room for improvement,” Blasco said. With reports from the Inquirer wires

Read Next
Sri Lanka to Pope: ‘We’re your fans’
EDITORS' PICK
Mass testing on April 14; but who to test is unclear
Cash aid trickles down to cities meeting DSWD requirements
US urges masks as dramatic steps to combat virus roll out
Rights groups wary as NBI summons 17 for ‘fake news’
Quick chat with Nicole Andersson: ‘You really don’t need much to be happy’
Quest for COVID-19 cure: PGH needs blood samples from recovered patients
MOST READ
Angelica Panganiban on endorsing Duterte in 2016: ‘Patawarin niyo ko’
PACC to NBI: Probe Robredo for ‘competing with national govt’ in fight vs COVID-19
PACC’s COVID-19 motto? ‘Lahat ng tutulong, ikukulong’ — Lacson
5 Filipinos on Forbes Asia’s “30 Under 30” roster
Don't miss out on the latest news and information.