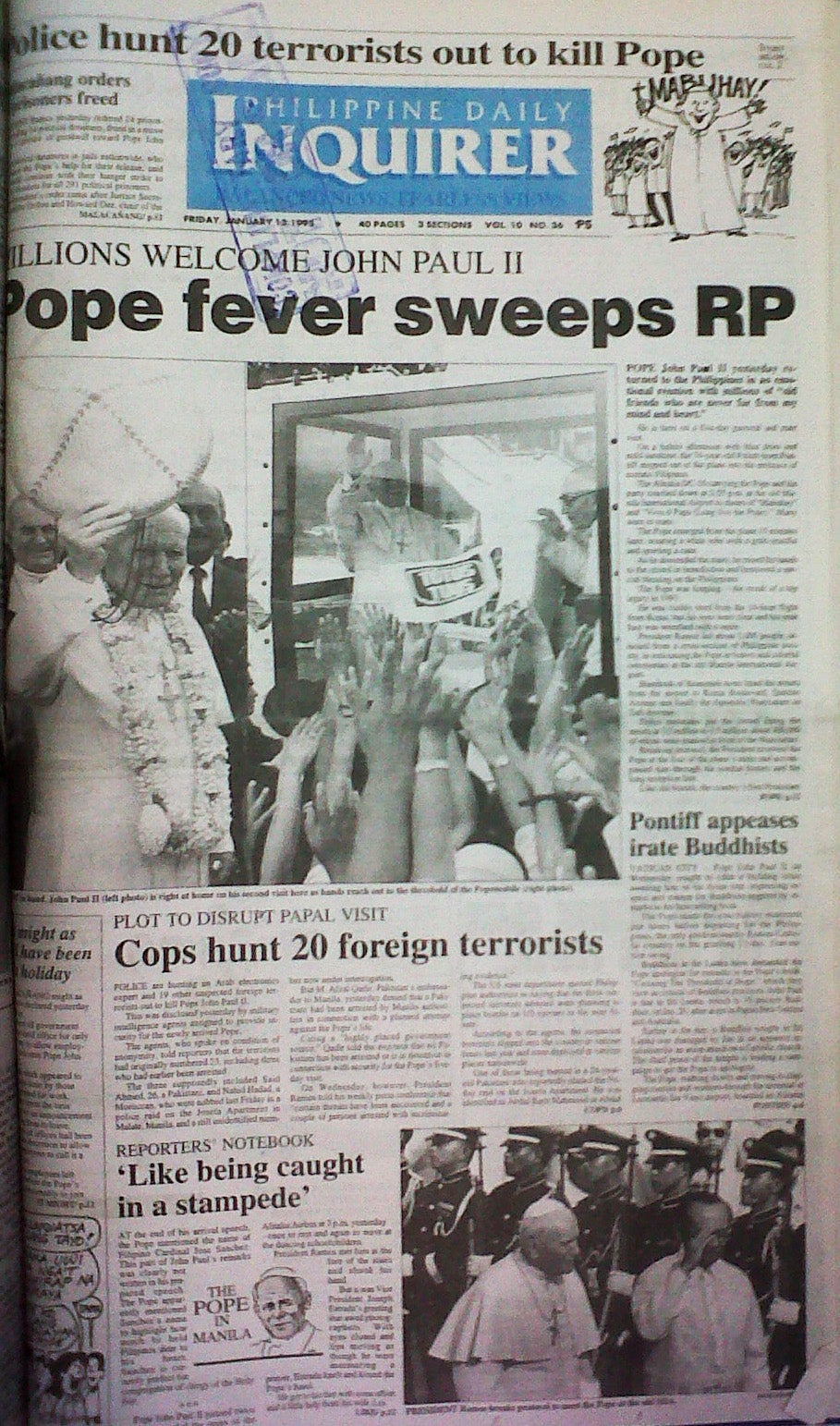 Pope John Paul II yesterday returned to the Philippines in an emotional reunion with millions of “old friends who are never far from my mind and heart.”

He is here on a five-day pastoral and state visit. On a balmy afternoon with blue skies and mild sunshine, the 74-year-old Polish-born Pontiff stepped out of the plane into the embrace of ecstatic Filipinos.

The Alitalia DC-10 carrying the Pope and his party touched down at 2:55 p.m. at the old Manila International Airport to cheers of “Mabuhay” and “Viva il Papa (Long live the Pope).” Many were in tears.

The Pope emerged from the plane 15 minutes later, wearing a white robe with a gold crucifix and sporting a cane.

As he descended the stairs, he raised his hands to the crowd in benediction and bestowed a special blessing on the Philippines.

The Pope was limping — the result of a hip injury in 1993. He was visibly tired from the 14-hour flight from Rome, but his eyes were clear and his pink face was wreathed with a smile.

President Ramos led about 5,000 people, selected from a cross-section of Philippine society, in welcoming the Pope in festive and colorful ceremonies at the old Manila International Airport.

Hundreds of thousands more lined the streets from the airport to Roxas Boulevard, Quirino Avenue and finally the Apostolic Nunciature on Taft Avenue.

Police estimates put the crowd lining the streets at 2.5 million to 3.5 million, about 300,000 of whom were massed in front of the Nunciature.

Breaking protocol, the President received the Pope at the foot of the plane’s stairs and accompanied him through the cordon honors and the long reception line.

Like old friends, the country’s first Protestant President and the leader of the Roman Catholic Church shook hands warmly and firmly.

As the plane taxied on the runway, about 1,500 brightly costumed schoolchildren broke into various folk dances to the beat of native drums, and waved banners and clumps of flowers.

At the center of the group were students holding up placards which they flipped into the papal colors of yellow and white and a red heart.

A boy and a girl handed a bouquet of flowers to the Pontiff, known for his attachment to children.

Manila Archbishop Jaime Cardinal Sin, who also broke protocol by going up the plane to meet his fellow bishop, summed up the mood of the people in his opening prayer.

“Father, look at your children eagerly awaiting the Holy Father,” he intoned.

In his arrival speech, the Pope said he had been looking forward to stepping on Philippine soil once more.

He was here in 1981 on a pastoral visit, and in 1973 for a brief stopover as archbishop of Krakow, Poland.

“The Filipino people are never far from my mind and heart, and I reach out to embrace each one with esteem and affection,” he said.

“We are indeed old friends, ever since my visit in 1981 for the beatification of Blessed Lorenzo Ruiz, now St. Lorenzo Ruiz.”

He said he also looked forward to the next four “very great” days.

Here to celebrate the 10th World Youth Day, the Pope urged young people to “see the world around you with the eyes of Jesus himself” and to proclaim the gospel “to the ends of the earth.”

“The Church and the world look to young people for new light, new love, new commitment to meeting the great needs of humanity,” he said.

“Your historic destiny is to build a civilization of love, of brotherhood and solidarity, a civilization which will be perfectly at home among the ancient cultures and tradition of the whole Asian continent,” the Pope said.

To the Ramos administration and the Church hierarchy in the Philippines, constantly at odds with each other over the population issue, the Pope gave his counsel.

“The Church and the political community work on different levels and are mutually independent, but they serve the same human beings,” he said.

“In that service there is ample room for dialogue, cooperation and mutual support.”

The Pope cited the Social Pact, a 1993 pledge by the executive, legislative and non-government groups to join hands in improving the lives of Filipinos, as a “valid and specifically Philippine model of cooperation for development.”

“I pray that the new solidarity which the Social Pact espouses will be a striking success for the good of the Filipino people, and for the pride and glory of the nation as a beacon for peace and harmony in Asia,” he said.

As is his wont, the Pontiff ignored security precautions and made a detour to the dancing schoolchildren, instead of proceeding to the Popemobile.

With Mr. Ramos on his left and Sin on his right, he clasped the hands of children and adults who squealed with delight at the thought of getting near the Pontiff.

The Pope’s close-in security, composed of four unarmed Swiss guards and members of the Presidential Security Group, barely managed to contain the mob.

During the 7.5-kilometer, hour-long trek from the airport to the Apostolic Nunciature on Taft Avenue where the Pope will stay for the duration of his visit, the crowd scene was the same.

Jewel Canson, chief of the National Capital Regional Command, said his 3.5 million crowd estimate was based on an average of 500,000 people per kilometer.

Through the bullet-proof glass box that was the Popemobile, the Pope, alternately sitting and standing, waved and smiled to the frenzied crowd.

Police stared helplessly as tens of thousands surged toward the Popemobile, breaking through police cordons to jostle for a glimpse of the Pontiff and for his blessings.

Most of the medical cases attended to by rescue teams were faintings, nausea and minor scratches and bruises as a result of the jostling.

Estimated to take only 15 minutes, the trip from the old MIA in Paraaque to the Nunciature in Manila took 55 minutes as the vehicles had to snake through the crowd and slow down at some points.

It was almost 5 p.m. when the Pope and his party reached the Nunciature, but the crowd there would not let go.

Thirty minutes after entering the building, the Pope emerged on the balcony for about two minutes to oblige his admirers outside. “The Pope loves you and he wants you to rest,” said the ailing Pontiff who, by then, had been on his feet for two hours.

Authorities made good their promise to throw a tight security blanket over all venues of the papal visit, as the old MIA and other papal venues teemed with 20,000 policemen deployed for the activities.

Police arrested a man from the crowd that gathered in Baclaran, minutes before the Pope’s convoy passed. Antonio Saballo, who claimed to be a civilian agent of the PSG, was caught carrying a .45 cal. pistol in a restricted area.

Sr. Insp. Romeo Gomez of the Pasay police said the incident could be part of the security measures, but Saballo and a companion were taken away in a Capcom patrol car, anyway.

The police became suspicious after Saballo pushed to the front of the crowd. After discovering a gun tucked at his waist, police dragged the shaking Saballo for questioning.

Saballo showed a gun ban exemption certificate from the Commission on Elections. At the old MIA, lines of nuns and priests were frisked by security officials before being allowed into the airport.

Men were ordered to take off their belts and ballpens. Even packets of chocolates were scrutinized.

The Pope holds his first public engagement when he says Mass at 11 a.m. today for delegates of the International Youth Forum at the Central Seminary Chapel of the University of Santo Tomas.

After the Mass, he will hold a dialogue with the IYF delegates, whom he described as “pilgrims who will carry Christ’s message to the third millennium.

The public will then have a chance to see the Pontiff when he proceeds to the UST Grandstand around 1:15 p.m. to give a message to the youth and the academic community.

He will stay for 30 minutes and return to the Apostolic Nunciature at 1:45 p.m. At 5 p.m., all 130,927 delegates of the World Youth Day will pray simultaneously the Way of the Cross.

The Pope will deliver his message during this event. The Way of the Cross will have 53 sites, with the most prominent at the UST, Araneta Coliseum, Amoranto Stadium and Ateneo de Manila.

The Via Crucis at the UST football field will be taped and broadcast all over the world.

Tonight, the Pope will be serenaded with mostly Filipino songs in a one-hour concert organized by the National Commission on Culture and the Arts.

They will perform on a makeshift platform under the LRT tracks in front of the Nunciature. With reports from the Inquirer wires