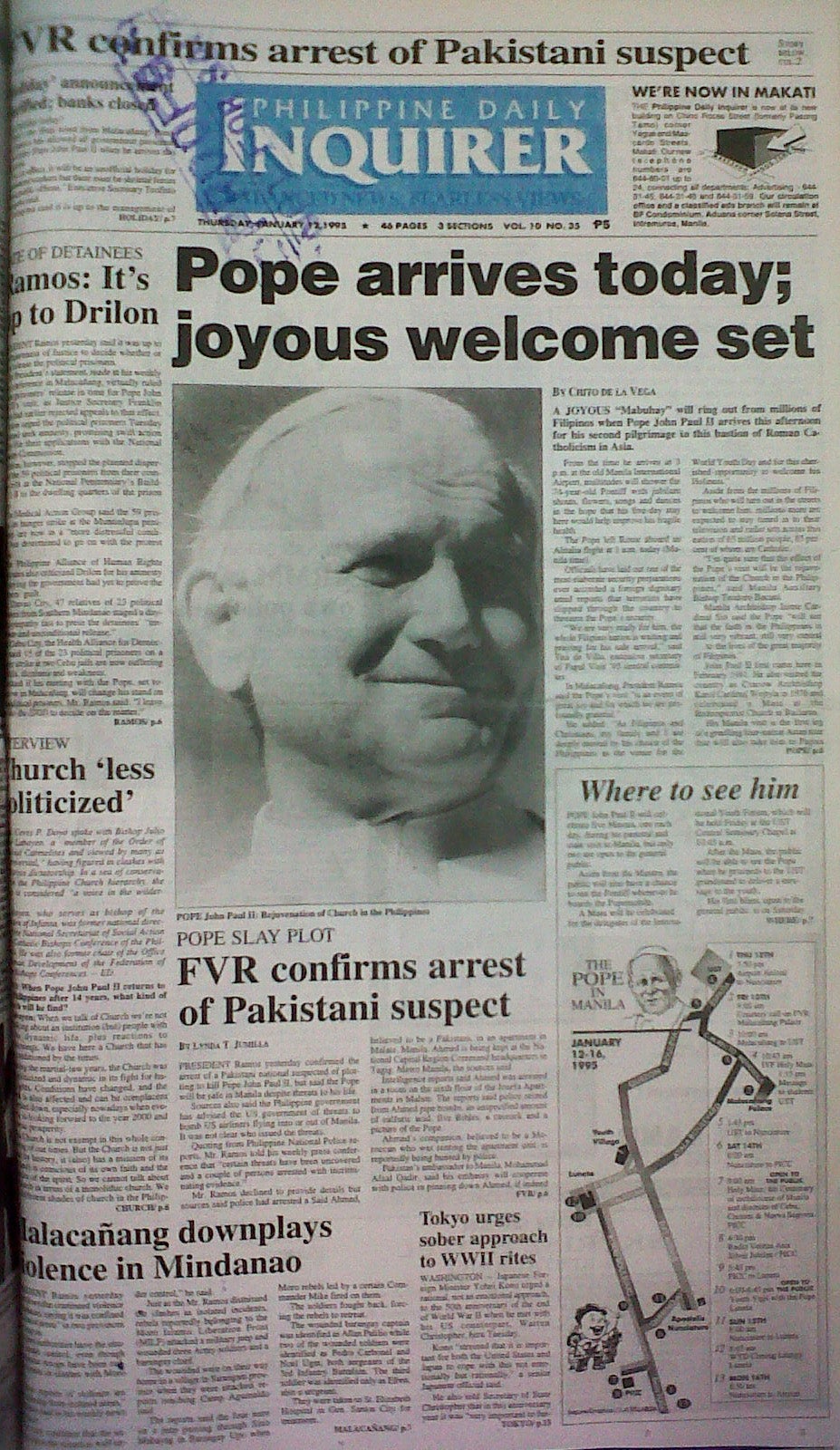 A joyous “Mabuhay” will ring out from millions of Filipinos when Pope John Paul II arrives afternoon, January 12, 1995 for his second pilgrimage to this bastion of Roman Catholicism in Asia.

From the time he arrives at 3 p.m. at the old Manila International Airport, multitudes will shower the 74-year-old Pontiff with jubilant shouts, flowers, songs and dances in the hope that his five-day stay here would help improve his fragile health.

The Pope left Rome aboard an Alitalia flight at 1 a.m. today (Manila time).

Officials have laid out one of the most elaborate security preparations ever accorded a foreign dignitary amid reports that terrorists have slipped through the country to threaten the Pope’s security.

“We are very ready for him, the whole Filipino nation is waiting and praying for his safe arrival,” said Tita de Villa, executive secretary of Papal Visit ’95 central committee.

In Malacanang, President Ramos said the Pope’s visit “is an event of great joy and for which we are profoundly grateful.”

He added: “As Filipinos and Christians, my family and I are deeply moved by his choice of the Philippines as the venue for the World Youth Day and for this cherished opportunity to welcome his Holiness.”

Aside from the millions of Filipinos who will turn out in the streets to welcome him, millions more are expected to stay tuned in to their television and radio sets across this nation of 65 million people, 85 percent of whom are Catholic.

“I’m quite sure that the effect of the Pope’s visit will be the rejuvenation of the Church in the Philippines,” said Manila Auxiliary Bishop Teodoro Bacani.

Manila Archbishop Jaime Cardinal Sin said the Pope “will see that the faith in the Philippines is still very vibrant, still very central … to the lives of the great majority of Filipinos.”

John Paul II first came here in February 1981. He also visited the country as Cracow Archbishop Karol Cardinal Wojtyla in 1976 and celebrated a Mass at the Redemptorist Church in Baclaran.

His Manila visit is the first leg of a gruelling four-nation Asian tour that will also take him to Papua New Guinea, Australia and Sri Lanka.

This will also be his first overseas trip since he broke his right thigh bone and had an artificial bone implanted in his leg last April.

Many view the Asian tour, which will cover 33,415 kilometers, as a test for the Pontiff’s delicate health and his determination to bring his message personally to Catholics.

On May 13, 1981, the Pope survived an assassination attempt at St. Peter’s Square. Since his hip operation, the man who once left younger aides breathless now walks with a cane, is clearly not confident when negotiating steps, and tends to become tired more easily than in the past.

He was scheduled to go to the United States and the United Nations last October but was forced to cancel due to health reasons.

The Pope, who has said he is determined to lead the Church into the next millennium, has put on a brave face, joking about his health and his difficulty in walking.

“They say the Pope is getting old and that he can’t walk without a cane, but, in one way or another, I’m still around. My hair is still intact, and things are not so bad with my head either,” he told Polish bishops at the Vatican last week.

Organizers have sprinkled the trip with ample rest time but time zone changes, long flights and lengthy outdoor masses under the hot Asian summer sun would be hard on far younger men.

In Manila, the Pope will celebrate five Masses and speak at eight other events, including a meeting of 197 Asian bishops and the silver jubilee of Radio Veritas Asia—a schedule that gives him only three hours for lunch and siesta daily, Church spokesmen said.

Sin, however, said the thought of a joyous welcome in Manila would energize thePope.

The open Mass on Saturday will mark the 400th anniversary of the Manila archdiocese and the Church hopes to draw two million people at the Rizal Park.

Church leaders said a Mass to celebrate World Youth Day on Sunday is also expected to draw the same number, including 12,000 foreign and 150,000 Filipino delegates to a youth congress aimed at training legions of young Catholic evangelists.

De Villa said Church and government representatives held a command conference at Camp Crame yesterday afternoon to iron out remaining kinks in the implementation of “Task Force Bantay Banal,” the security arrangement for the Pope.

So secretive was the security plan for the Pope’s arrival that organizers refused to give details of his trip from the airport to the nunciature, where he will stay.

“Because of the tight security, we cannot be as extravagant as we would want to,” said De Villa.

Brig. Gen. Leo Alvez, chief of Presidential Security Group which will provide close-in security for the Pontiff, said his group was ready to deal with any threat.

“What we are most afraid of is the unruly crowd … where the crowd will rush to the Pope and there will be a stampede,” he told reporters.

Chief Supt. Jewel Canson said some 10,000 policemen would be deployed to secure the sites the Pope is to visit, manage traffic and control the crowd.

“In case of an emergency, we can get the Pope to a hospital in five minutes flat,” Health Secretary Juan Flavier said.

Flavier said an ambulance will be ready and a helicopter will be standing by in a designated area at the Rizal Park.

The helicopter will be used to rush the Pope to the Philippine Heart Center where a whole wing of the hospital has been cordoned off for his use.

A helicopter landing pad has been cleared on the hospital’s roof top.

A lean 5,000-man party, led by the President, First Lady Amelita Ramos and Sin, will welcome the Pope at the airport. Some 1,500 schoolchildren will present colorful dance performances at the airport.

Along the route of his motorcade to the papal nunciature, children and adults will throw flowers and shout, “We love you!” as he rides the bullet-proof Popemobile.

The other members of the clergy who would be present are Ricardo Cardinal Vidal of Cebu; Bishop Carmelo Morelos, president of the Catholic Bishops Conference; Archbishop Oscar V. Cruz, representing Luzon; Archbishop Alberto Piamonte representing Visayas; and Most Reverend Fernando Capalla, of the prelature of Marawi, representing Mindanao.

The Pope’s first official act would be a 75-minute meeting with Mr. Ramos on Friday.

On top of the President’s agenda on his meeting with the Pope are the government’s efforts at controlling the population growth rate and forging peace with rebel groups.

“I am also inspired by Pope John Paul II’s deep personal commitment to the expansion of peace in the world, to ecumenism, to the youth who are our future, and to the mission of addressing the ethical and moral problems confronting the modern society,” he said.

Mr. Ramos is expected to reiterate to the Pope his administration’s commitment to the preservation of the family as a basic unit of society.

He said he “considers the Filipino family not only as a basic unit of society, but also as the foundation of the country’s survival as a national community.” With reports from the Inquirer wires