On a wing and prayer, Pope embarks on Asian trip 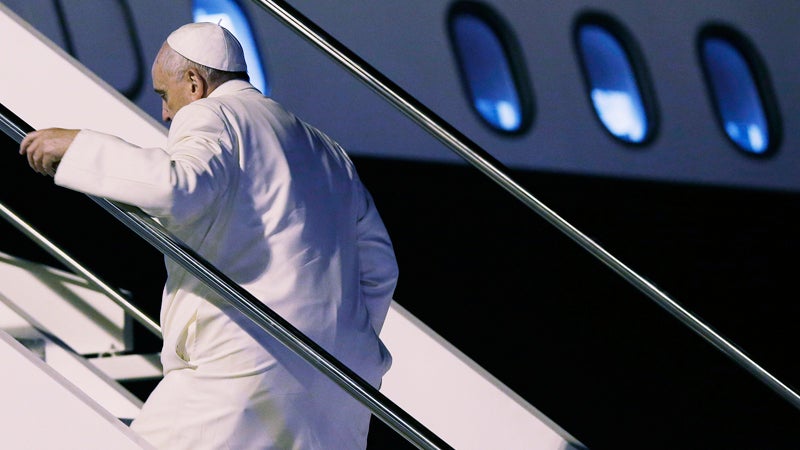 VATICAN CITY—Amid security anxieties owing to international terrorist attacks in the past weeks, Pope Francis prayed at the shrine of the Madonna in Rome’s Basilica di Santa Maria Maggiore early Monday before boarding a chartered Alitalia flight in the early evening on Monday (early Tuesday morning in Manila) for his much-anticipated, one-week apostolic visits to Sri Lanka and the Philippines.

The prayer for a safe trip followed his Sunday Angelus recitation on St. Peter’s Square in which he told the crowd about his pastoral trip, only his second to Asia as Pope, and urged especially the Filipino and the Sri Lankan communities in Italy to accompany him with their prayers.

By visiting Santa Maria Maggiore to offer roses and prayers to Our Lady, the Pope was continuing a tradition he had set for his papacy.

Last year, the Pope also visited Santa Maria Maggiore before going to the Holy Land in May and to South Korea in August.

In fact, right after his election in the conclave of March 14, 2013, the Pope went to Santa Maria Maggiore to pray at the shrine of the Madonna.

Pope Francis, a Jesuit, also prayed at the tomb of St. Pius V, the Dominican Pope who implemented the reforms of the Council of Trent during the Counterreformation and rallied Europe against the Ottoman Turks in the Battle of Lepanto. The Christian victory, according to historians, effectively checked the Muslim advance in Europe.

Pope Francis’ prayers for a safe trip came amid heightened security threats owing to recent terrorist incidents particularly last week’s attack on the Paris office of the satirical newspaper Charlie Hebdo in which a dozen people were killed and several seriously injured.

The Pope called the incident an act of “human cruelty” and “terrorism.”

“The attack makes us think of great cruelty, human cruelty; of such terrorism, both isolated terrorism and state terrorism,” the Pope said at the Mass he held for the victims at Sanctae Marthae Chapel. “The cruelty of which man is capable! Let us pray, in this Mass, for the victims of this cruelty. So many of them. And let us also pray for those who perform these cruel acts, so that the Lord might transform their hearts.”

In Sri Lanka, the Pope will be received by President Maithripala Sirisena, who defeated Mahinda Rajapaksa in a snap election on Thursday.

Although the security threats may have abated owing to the crushing by Rajapaksa in 2009 of the Hindu Tamil rebellion against the dominant Buddhist Sinhalese establishment, the Pope also has to contend with heightened Buddhist fundamentalism.

He also has to face the lingering Buddhist resentment of Pope John Paul II’s 1995 visit that was preceded by outrage over his best-selling book “Crossing on the Threshold of Hope,” in which he criticized the Buddhist concept of salvation.

Buddhist fundamentalism has only grown in the ensuing 20 years, with hard-line Buddhists waging a violent campaign against Muslims.

In the Philippines, it’s an entirely different ball game, as the Pope has to contend with Muslim fundamentalism.

Although the peace agreement between the government and the Moro Islamic Liberation Front has contributed to the improvement of security in the Philippines, the Pope comes to the country amid global concern over terrorist attacks.

As in Sri Lanka, the Pope will have to contend with the aftermath of the 1995 assassination try against Pope John Paul II by the global terrorist group al-Qaida.

Police have been on heightened alert since Friday with the celebration of the annual Feast of the Black Nazarene, which drew more than 5 million devotees to the capital.

The Philippine National Police has declared a full alert for the papal visit, canceling all leaves for its 150,000 officers.

From Sri Lanka, Pope Francis will arrive at Villamor Air Base in Pasay City on Thursday afternoon. He will stay at the Apostolic Nunciature in Malate, Manila.

Francis will be officially welcomed by President Aquino in Malacañang the following day. 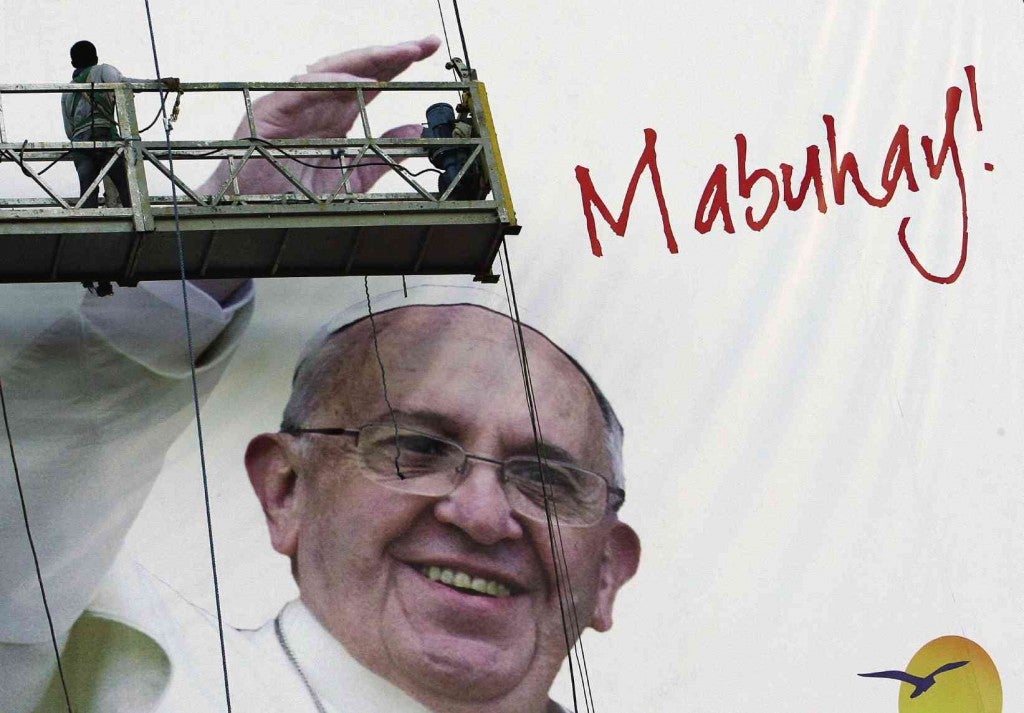 FINISHING TOUCHES Workers raise a large tarpaulin with a picture of Pope Francis on Roxas Boulevard in Manila as preparations to welcome the Pontiff to the Philippines enter the final stages. RAFFY LERMA

The Pope will then go to Manila Cathedral to say Mass and later hold a meeting of Filipino families at Mall of Asia Arena in Pasay City.

On Jan. 17 the Pope will head south to Leyte province to visit Tacloban City, the ground zero for Supertyphoon “Yolanda” (international name: Haiyan), and say Mass at the airport there.

Yolanda, the most powerful storm ever to hit land in history, left more than 6,300 people dead in Eastern Visayas, where Leyte Island sits, and 4 million others homeless on Nov. 8, 2013.

After the Mass, the Pope will travel to nearby Palo town to share a meal with 30 survivors of the 2013 earthquake in Bohol province and of Yolanda. More than 200 people died in the
Oct. 15, 2013, earthquake in Bohol, which also toppled several centuries-old churches.

The Pontiff will bless the Pope Francis Center for the Poor in Palo before visiting the town’s cathedral to meet the clergy.

On Jan. 18 he will meet with religious leaders and the youth at the Pontifical University of Santo Tomas in the morning. In the afternoon he will celebrate his concluding Mass at Quirino Grandstand in Rizal Park.

The organizers expect up to 6 million people to attend the Mass, surpassing the crowd of 5 million at the closing Mass of the 1995 World Youth Day said by St. Pope John Paul II.