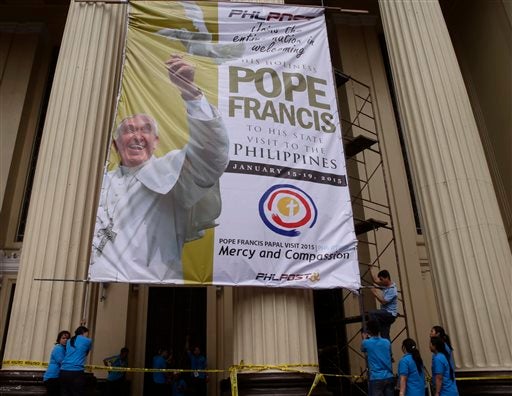 MANILA, Philippines—Pope Francis is trying to learn Tagalog for his visit in the country but finds it “difficult,” according to a report of the Catholic Bishops’ Conference of the Philippines (CBCP).

“We were able to talk with him. That’s why before that day, I practiced my Italian, what I would tell him,” a Filipino seminarian based in Rome said of his encounter with the pope before the Te Deum and Vespers on December 31, 2014.

“He asked me if I spoke Tagalog. He said, ‘You speak Tagalog?’ I said, ‘Yes!’ Then he said, ‘I’m trying Tagalog but it’s difficult,” Bro. Francis Dominic Vergara of Congregation of the Sons of Holy Mary Immaculate recounted in a CBCP News report.

Meanwhile, Archbishop Socrates Villegas said on Monday that Pope Francis is prepared to say the phrase “Sumasampalataya ako” during the credo in his Mass at the Quirino Grandstand on January 18.

“I think he is prepared to say ‘Sumasampalataya ako.’ It would be stressful for the Pope to recite the Apostles’ Creed in Tagalog. Mercy and compassion for the pope,” Villegas said in during the Inquirer Conversations forum in the University of Santo Tomas.

Earlier reports stated that Pope Francis will use English in his Masses in Tacloban City on January 17 and in Rizal Park on January 18.

The Mass to be held in the Manila Cathedral, however, will be in Latin.

Pope Francis to say Masses in English in PH visit