Factbox: Catholicism in the Philippines 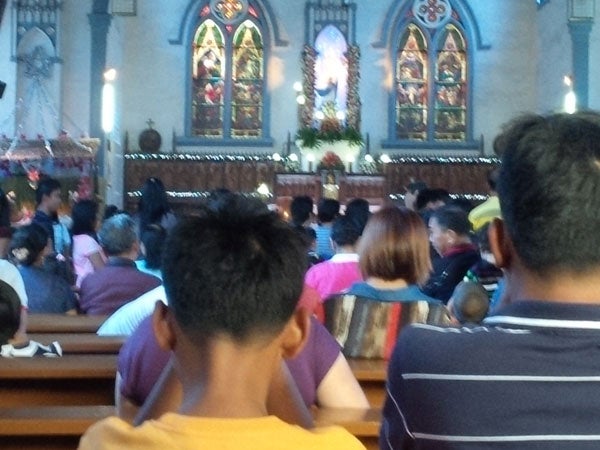 Responding to the call of Pope Francis, Filipino Catholics on Sunday prayed for the persecuted Christians in Syria and Iraq during Masses nationwide in observance of the National Day of Prayer for Peace, as well as the Day for Charity for thousands of victims of atrocities committed by the terrorist group Islamic State of Iraq and Syria (Isis). PHOTO BY RICK ALBERTO/INQUIRER.net

Manila, Philippines – Key facts about the Catholic religion in the Philippines, which Pope Francis will visit this week as part of his second trip to Asia:

NUMBERS: Eight in 10 Filipinos are Catholic, making the nation of 100 million people Asia’s bastion of Christianity. Protestants, Muslims, and members of other Christian sects make up the rest.

HISTORY: Portuguese explorer Ferdinand Magellan claimed the islands for Spain in 1521 on a voyage to circumnavigate the globe. The archipelago was named after the Spanish monarch King Philip II. Spanish rulers and friars entrenched Catholicism, over what had been mainly polytheist, animist and Muslim populations, during nearly 400 years of colonial rule that ended when the Americans wrested control in 1898.

UNIQUE WORSHIPPING: Filipino Catholics are known for enormous, colourful and in some cases extreme expressions of piety.

Millions of barefoot devotees each January join a religious procession Manila hoping to touch a centuries-old icon of Jesus Christ, called the Black Nazarene, which is believed to have miraculous powers.

At Easter devotees whip their backs bloody while others have their hands nailed to crosses in all-too-real imitations of Christ’s passion.

POLITICAL POWER: The largely conservative church became an agent for change when it opposed then-president Ferdinand Marcos’ martial rule in 1972-1981. It then helped to lead a bloodless “people power” revolt that ended his 20-year rule in 1986.

INFLUENCE ON LAWS: Church lobbying has helped to ensure the Philippines remains the only country in the world where divorce remains illegal. Abortion and same sex marriage are also outlawed.

MODERNIZING VALUES: The church led a long but ultimately failed campaign lasting 15 years against artificial contraceptives. It ended with a 2014 law requiring the state to supply condoms and birth control pills, as well as provide sex education in schools.

SAINTS: The Philippines has two saints, both martyred while spreading the faith to the rest of the region: The first is San Lorenzo Ruiz, killed in Japan in 1637 and canonised in 1987. The other is San Pedro Calungsod, a catechist who was killed in Guam in 1672 and canonised in 2012.

PREVIOUS POPE VISITS: Pope Paul VI became the first pontiff to visit the country in 1970, surviving a knife attack by a Bolivian painter dressed as a priest. The attacker was subdued and the visit proceeded without further incident.

Pope John Paul II visited the country in 1981 and again 1995. On the latter visit, an estimated five million people attended a mass in Manila’s central park.