MANILA, Philippines—The Armed Forces of the Philippines will purchase two C-130T aircraft for $55 million (about P2.5 billion) from the United States to improve the country’s maritime security and interoperability, especially during a disaster.

The US Embassy in Manila, in a press statement, said AFP representatives led by Maj. Gen. Victor Bayani, assistant chief of staff for logistics, conducted a second inspection of the two aircraft at the Joint Reserve Naval Air Station in Fort Worth, Texas, on Friday. 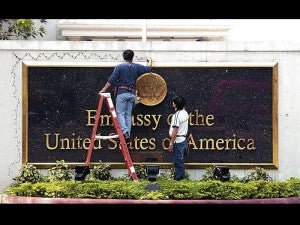 Following the inspection, Bayani officially signed a letter of offer and acceptance on behalf of the Philippine government to procure the aircraft, with an anticipated delivery date in the first quarter of 2016.

The embassy said the sale of the two C-130s was part of the US government’s commitment to help the Philippines develop its territorial defense and maritime security capabilities, and enhance its ability to respond to humanitarian and disaster emergencies, which routinely occur in the country.

The C-130 is designed to provide significant airlift capability even in remote underdeveloped airfields. The aircraft proved its worth in the aftermath of Supertyphoon “Yolanda,” moving large numbers of people and relief supplies to and from affected areas.

The aircraft will raise the number of mission-ready C-130s in the Philippine Air Force to five.

The total value of the procurement is projected to be about $55 million. As part of a joint investment program to build the capabilities of the Philippine military, the United States is providing $20 million in US Foreign Military Financing (FMF) toward the purchase.

In 2014 alone, the United States allocated a total of $50 million in FMF to the AFP. In addition to the C-130s, the funds will be used to upgrade equipment on board Philippine Navy ships, improve AFP command and control systems, provide advanced technical training and strengthen institutions responsible for the maintenance of the AFP’s growing inventory.

“This is another example of how the close partnership between US and Philippine forces is helping build further capacity that will benefit the entire nation,” the American embassy said.

Earlier, the AFP said the government will spend more than P90 billion for the second phase of its modernization program from 2015 to 2017 to address the military’s capability for humanitarian and disaster assistance, strengthen internal security and protect the country’s interest in the West Philippine Sea.