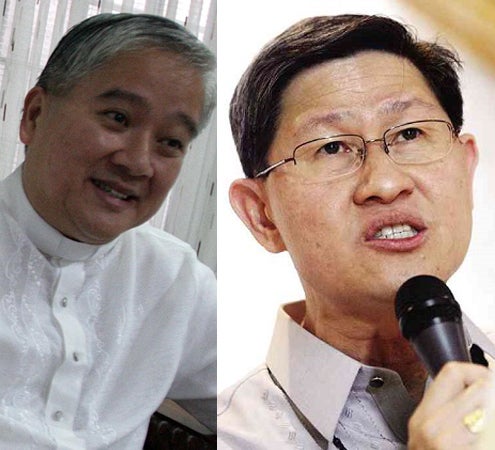 Luis Antonio Cardinal Tagle, archbishop of Manila, and Archbishop Socrates Villegas, president of the Catholic Bishops’ Conference of the Philippines (CBCP), are taking part in separate Inquirer Conversations in the run-up to the papal visit, as part of the Catholic Church’s continuing initiative to prepare the faithful for a historic religious event.

The Conversations, to be conducted with Opinion columnists of the Inquirer and Inquirer publisher Raul Pangalangan, are open to the public and all media.

The Pope is visiting the Philippines from Jan. 15 to 19.

The two prelates are expected to field questions about the significance of the visit, the state of the Catholic Church in the Philippines and the Pope’s preferential option for the poor.

A portion of each forum will feature questions from the audience.

In line with the official theme of the papal visit, the Conversations have been given related titles.

“A Church of Mercy”—the Conversation with Cardinal Tagle—will be held at Colegio de San Juan de Letran in Intramuros, Manila, on Saturday, Jan. 10.

“A People of Compassion”—the forum with Archbishop Villegas—will be at the University of Santo Tomas on Monday, Jan. 12.

Tagle and Villegas are among the five Philippine-based official members of the Pope’s 32-member delegation. The others are Archbishop Giuseppe Pinto, the papal nuncio to the Philippines, and the nunciature’s two secretaries.

In recent synods, Tagle and Villegas cut a higher profile, both for their relative youth (they are both only in their fifties) and for the message they conveyed.

For instance, at the October 2012 Synod of Bishops, held under Pope Benedict XVI, both Tagle and Villegas made interventions that anticipated Pope Francis’ repeated emphasis on mercy and compassion.

Tagle turned heads when he spoke of the power of silence.

“Confronted with the sorrows, doubts and uncertainties of people, she cannot pretend to give easy solutions,” Tagle said. “In Jesus, silence becomes the way of attentive listening, compassion and prayer. It is the way to truth.”

No place for pride

Villegas made a similarly notable plea for greater humility within the Church.

“The Gospel cannot thrive in pride,” Villegas said. “When pride seeps into the heart of the Church, the Gospel proclamation is harmed.”