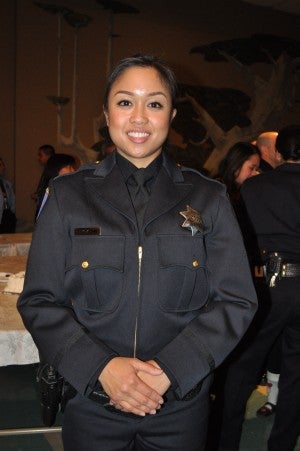 Kovitprakornkul and Edgar Parker III, also a Fil-Am, are two of the 45 brave men and women who recently graduated from the San Francisco Police Academy. The ceremony was on January 2 at the Scottish Rite Masonic Center on 19th Avenue.

San Francisco is home to 2,209 sworn officers, according to Officer Albie Esparza, public information officer at the SFPD.

“The training [in Presidio] was no other experience that I’ve ever been through or [I don’t think] any other type of company can simulate this type of training,” Kovitprakornkul told Manila Mail in an interview right after their commencement ceremony. “It took a lot of dedication and a lot of perseverance, and you really had to have the will to want this—the will to achieve, to be a good officer.”

Though the recruits went home every night during their eight-month training, Kovitprakornkul felt like they lived in the academy.

“The hours are from 8 a.m. to 5 p.m. but we do get there sometimes two hours early and a lot of times, we leave two to three hours late so there’s not much time sleeping,” she said.

“For eight months, you’re pretty much sleeping, eating and breathing academy but as long as this is what you really want to do and you have a passion for it, it’d be fun. It was a lot of fun for me,” she added.

Joining the force for her means breaking a “boring day or not letting it go stale,” having been inspired by her mother’s hardworking ethic.

“I wanted to do something where I was moving, I was active and I thought that law enforcement would be a fit for me,” Kovitprakornkul said. “When I started learning more about the law and about law enforcement and the history of it, I realized that it was definitely the right choice for me.

“I’m very committed to it and I’m very passionate about the mission of what SFPD is trying to do. At this point, I’m just trying to do my best to live up to it and exceed it.”

If there’s one thing that Kovitprakornkul is worried about, it’s that she would not want to cause her mother any anxiety. Her grandfather is an army veteran who received quite a few honors. 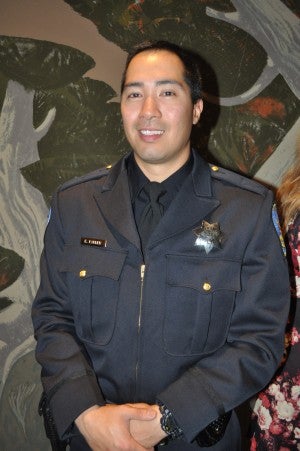 “My mom said, ‘As long as what you’re doing and what you’re standing up for is the right thing, you know I can live with it.’ So when she gave me the OK, that’s when I went full force and I was like, OK I’m going to do this. This is what I want to do and I’m glad you guys support me.”

During the training, the staff put so much emphasis on officer safety. “But as long as you’re doing what you’re supposed to be doing, at the end of the day, you should come home to your family. So I feel a lot better about it.”

Evelyn Galang, Kovitprakornkul’s mother who hails from Pampanga, is a nurse working at St. Luke’s Hospital. Happy and proud of her daughter, she said, “Kung mamamatay, mamamatay ka [if you die, you’d be doing it] at least for the country.”

The family moved to America in 1991 through a petition by Galang’s father. Galang and her husband have three children. Tasawan is their middle child.

Parker: Go for it

Parker, the other Fil-Am in the 241st recruit class, is 33 years old, married and has two kids. Born and raised in Iloilo before moving to America when he was 15 years old, Parker has a B.A. in kinesiology from San Francisco State University and a master’s in sports management from the University of San Francisco.

He joined the police force “for opportunity and acquired passion.”

“I always wanted to talk to people, help them. That was my objective. I saw the connection between sports and interacting with people and I thought, this is a great job,” Parker said.

Formerly an athletic coach at Skyline College, he considers it worthwhile to protect and serve the city, akin to a duty.

Apart from the classroom lectures and tests in the academy, the new SFPD officers were given stress simulation exercises and defensive tactics training to prepare them for the high-risk job.

“The stuff we’ve done all throughout the training was tough and finding myself in doing those things, those are the things that I would cherish and appreciate. I learned something about myself that I never thought I would do and what I can handle or can’t handle. I probably added strengths and weaknesses along the way.”

While joining the force is tough emotionally and physically, Parker encourages anyone with the same passion to go for it. “If you really want this job and you’re determined, I would say go for it and your family will support you. So get a right mindset to go for it.”