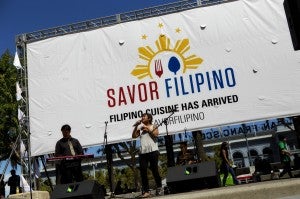 Something was different about that day.  It was a clear sunny Saturday in the city. The fog that characterizes summer in San Francisco was absent. Present in addition to the tens of thousands of lively tourists and local techies wandering the bay front sidewalks were excited Pinoys and Pinays and their families, pointing to Justin Herman Plaza with their hungry lips.

The San Francisco Giants on August 30, 2014 was one of the worst teams in baseball, yet the letters “SF” could be seen in every color on apparel gleaming in the sunlight. On both sides of Embarcadero there seemed to be more people, more excitement, more local produce bagged and sold at the Ferry Building Farmer’s Market and more artisans manning more booths at the SF Artist Market.

At the center of it all, the Vaillancourt Fountain was partially obscured by white tents with red, yellow and blue flags, bearing signs that read “Karinderia,” “Pulutan” and “Street Food.” Words like “lugaw,” “kare-kare,” and “sisig” were trending off fingertips on mobile devices and on the tips of garlic-rice tongues. It was clear that San Francisco savors Filipino food.

Perhaps it was the searing sun, or perhaps it was the Red Horse breakfast that the author was served by San Francisco’s own Asian food mad scientist Tim Luym (who is now at San Mateo’s Attic Restaurant), or maybe it was the siling labuyo that he put in his kinilaw that day, but the air at Savor Filipino buzzed and diners’ blood surged from the explosions on their palates.

Whose food?  Our food! 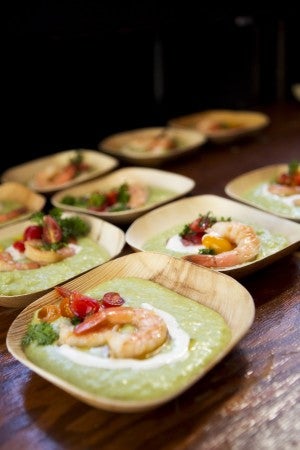 Another thing that has been burning hot for the past few years is the topic of “mainstreaming” Filipino Food (see Bino A. Realuyo’s heartfelt love letter on this topic “Dear Filipino Food in America” to get up to date). The persistent trend is one of the motivating forces that birthed the Filipino Food Movement, the not-for-profit organization that produced the landmark event.

FFM and Savor Filipino were a collective dream of the organizers during simultaneous food comas they suffered after Kulinarya, the Filipino food cooking competition that has become a tradition in San Francisco. While Kulinarya did a great job celebrating the community’s professional and amateur culinary talent, it remained an “ethnic” affair.

The moving and shaking food lovers behind FFM wanted to do an event that invited the greater community (i.e., non-Filipinos) to the dining table, and to have it curated by those that have intimacy with the cuisine.  Defining “Filipino” is too complicated to be left to outsiders with TV shows, so the FFM board rolled up its sleeves and set about doing the work of throwing the biggest Filipino Food party the nation has ever seen.

The pool of Filipino food talent runs the gamut of the food industry–from the white tablecloths at the trendiest locations, to the boxed TV dinners in the frozen aisle at the neighborhood grocery and the equally daring entrepreneurs who put up either turo-turos that serve as quasi-community centers or mobile food trucks that serve long lines all over after sending out a single tweet.

Not to be overlooked are the many food writers whose works are sought after by home chefs seeking credible resources, and professional chefs cooking in other idioms who dream of placing their lola’s dish on their employer’s fine dining menu.  Each talent plays an important role in the story of Savor Filipino. While the original wish list was comprehensive and covered all 50 states (and even our Canadian neighbors were considered), eventually, overtures were made, flights were booked, and the roster of featured chefs had to be finalized. 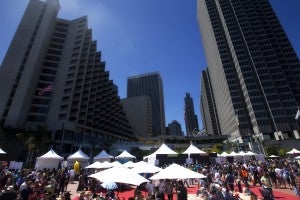 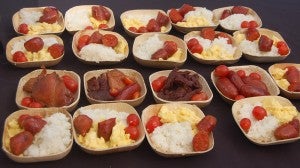 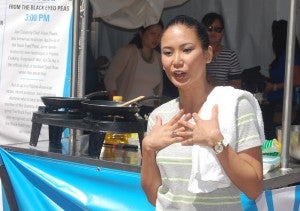 On the eve of Savor Filipino, the FFM board did not know what to expect once it had 22 chefs in the same room, all accustomed to being the boss in their respective kitchens.  Perhaps it takes a Filipino to understand this, but each individual talent had his/her own take on Filipino food, and each perspective was simultaneously true.

Despite the challenges of having so many datusworking together, a chaotic system of organization organically emerged, a cooperation slowly began, and in true bayanihan fashion, the group lifted the kubo of Filipino food from where it had been, to a location that is more resilient, with more potential for a more prosperous harvest.  With the event to take place the very next day, all seemed ready for the big fiesta.

All our star chefs (some of whom had come from places as far as Seattle, New York and Manila) retired to their hotels and homes except for chef Francis Calda.  An Army Reservist, he volunteered to sleep on the floor of the mobile kitchen, to safeguard the pre-prepped ingredients.  Braving an overnight stint on the San Francisco streets turned out to be an act of heroism when the refrigeration unit on the mobile kitchen failed, endangering the event’s main attraction, the food. 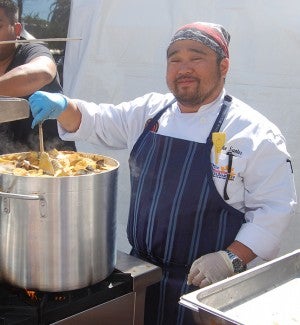 Had Chef Calda not been there, monitoring the temperatures (and cooling the refrigerator virtually by hand), we would have begun Savor Filipino with a pantry full of rotten ingredients, and we would have had to rename the event “Spoiled Food.”

Additional honorable mentions go to Savor Filipino’s squadron of healthy Filipino Food pioneers, authors and a Black Eyed Pea.  Bringing formidable star power to the event was Apl.de.Ap, who as a member of the world famous Black Eyed Peas hip-hop group, also acts as the group’s tour chef behind the scenes, serving his Pampangan home-style cooking to band mates Will.I.Am, Taboo and Fergie (who now claims adobo as her favorite food).

Savor Filipino featured two authors at the event, one each from Northern and Southern California.  Los Angeles-based Marvin Gapultos (of Burnt Lumpia and Manila Machine fame) signed copies of his latest publication The Adobo Road Cookbook, written in his unique voice, from his Filipino American perspective as someone finding his cultural roots through global adventures that begin and end in his home kitchen.

Author Dawn Mabalon delivered Savor Filipino’s first keynote address.  Mabalon’s book Little Manila is in the Heart is the definitive chronicle of the manong generation’s contribution to West Coast agriculture. This untold story is celebrated in Mabalon’s hands, telling how America’s breadbasket became the most productive (and delicious) agricultural endeavor, thanks to Filipino immigrant dreams and labor.

One of the most exciting parts of Savor Filipino was its inclusion of healthy Filipino food offerings.  California cuisine is known for cultivating delicious, healthy dishes. Chef, writer and farmer Aileen Suzara appeared in a culinary workshop with her message of healthy substitutions and farm-to-table style, as someone who can take gulay (vegetables) from seed to harvest and from sautee to serving. 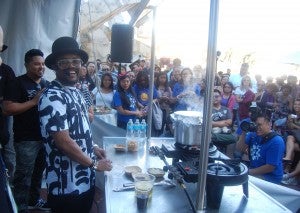 Apl.de.Ap presents his own adobo recipe to the large crowd at Savor Filipino. PHOTO BY RAYMOND VIRATA

Since its inception, the Filipino Food Movement has had booths at other major festivals up and down the state, and members of FFM appear at events with the battle cry, “Let’s Go Filipino!”  We encourage proud Filipinos to take their non-Filipino friends out to Filipino restaurants, or to prepare them something at home that they might never expect.  We promote the markets and groceries that dare to make room on their shelves for Filipino food products, and we celebrate those in the culinary world that take on Filipino cuisine as their livelihood.

We highlight every Filipino food story and recipe published in print or online, and we applaud the trailblazers that put themselves on the line to push Filipino food to the next level.  Most of all, we try to make people aware that on some level they are all already a part of this movement.  Every dish ordered, prepared and consumed, whether or not it was photographed and uploaded to the Internet, is a step forward in this long, delicious march that is the Filipino Food Movement.