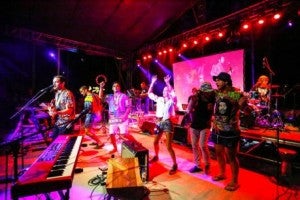 Rising from the recent Typhoon Ruby, which battered Oriental Mindoro Puerto Galera, a divers’ haven renowned for its marine biodiversity, will once again be turned into a world stage for the upcoming Malasimbo Music and Arts Festival on March 6-8, 2015.

For the past five years the organizer, D’Aboville Foundation, has partnered with the Department of Environmental and Natural Resources, the Department of Tourism and the Municipality of Puerto Galera to bring some 5,000 spectators from all over the world for the weekend festival.

Past gatherings have benefited reforestation efforts and the completed solar energy project for the Iraya Mangyan community in Barangay Baclayan, Mindoro.

The island is accessible via Verde Island Passage from Batangas Pier using Minolo Shipping line or private bancas, approximately an hour and a half trip. Those who opt to bring their cars and trailers can take the slower “RORO” (roll in, roll out) or take the FastCat watercrafts, carrying vehicles from Batangas to Calapan pier. It will take another scenic hour-drive from Calapan to Puerto Galera, where Tamaraw Falls will graciously welcome arriving guests.

Though several four- to five-star family resorts have mushroomed, like the nearby Infinity, Manor Hotel, Puerto Galera Beach Club and Tamaraw Beach Resort, among others, there are the native cottages and rooms for rent offered by local residents catering to backpackers. 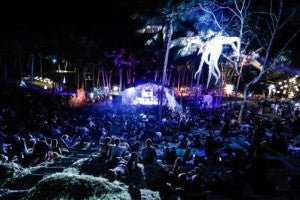 For those seeking colorful nightlife, White Beach, Sabang and Lalaguna offer bars and restaurants open until late. Hotel and room prices vary from US$15 to $400 per day, these are usually sold out during the Malasimbo Music Fest.

From a shallow coral reef dive of 12 meters to a deep dive of 30 meters (100 feet), one will experience a spectacular showcase of marine life. Sites such as North Wall and Shark Ridge often yield sightings of turtles, sharks and a school of rays, and hammerheads, if you are lucky.

Puerto Galera remains a “virgin island” tourist destination of the Philippines, boasting private, white sand coves accessible only by outrigger boats and jet ski safari around the shores. It is also the only bay in the country to be listed among the “Most Beautiful Bays in the World.” This honor is inscribed in stone at the point of entry welcoming guests  to the municipality. A boat trip further up to Occidental Mindoro will reveal the indigenous Mangyan tribes in their native communities. 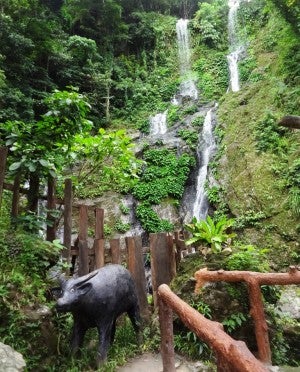 During the festival, a Mangyan Village Exhibit will feature the seven indigenous home-styles, a fixed feature on the festival grounds since year one. Knowledge about the island’s rich pre-colonial culture and heritage is shared through workshops, performances and information cues.

Past performers can be viewed at http://malasimbofestival.com/performers/ and the 2014 official video at http://youtu.be/ryXNfZtZ4tY. For the 2015 updated list of performers, information is available through the foundation website: Malasimbo.com. One of the performers is Bob Marley’s next generation reggae artist, Ky-Mani Marley Jr, also known as KJ Marley.