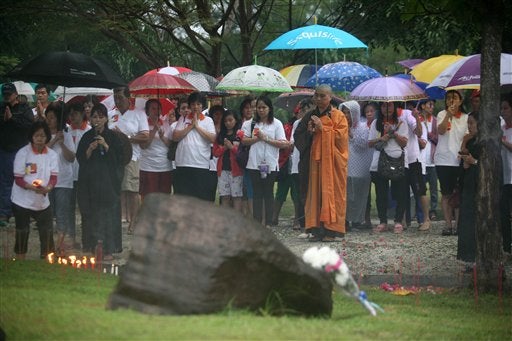 Indonesian Buddhists pray for the victims of Indian Ocean tsunami one day ahead of its 10th anniversary at a mass grave in Banda Aceh, Aceh province, Indonesia, Thursday, Dec. 25, 2014. AP

Deaths caused by weather-related disasters like Typhoon “Ruby” (international name: Hagupit) in the Philippines and Cyclone “Hudhud” in India are declining, according to the head of the United Nations Office for Disaster Risk Reduction.

Margareta Wahlstrom, also the UN special representative on disaster risk reduction, on Thursday noted the “significant drop in the number of people directly affected by disasters in both Asia and Europe.”

In a statement issued on the 10th anniversary of the Indian Ocean tsunami, which left 227,000 people dead in 14 countries on Dec. 26, 2004, Wahlstrom said Ruby and Hudhud “could have claimed many thousands of lives.”

But “[t]hanks to a combination of better organization, coordination, response and preparedness [between the public and private sectors], improved weather forecasting, early warnings, public education, and media engagement, there has been a reduction in the number of people dying in such [disasters],” she said.

“That’s the good news. But risk and opportunity are two sides of the same coin. Economic development and population growth are driving up our exposure to risk at an unprecedented rate and this is reflected in the escalation of economic losses this century, calculated by the UN Office for Disaster Risk Reduction to be in the region of $2 trillion,” Wahlstrom said.

She said that “reducing the loss of lives will remain a key priority” as negotiations continue on a revised Hyogo Framework for Action (HFA), a global plan for disaster risk reduction endorsed by the UN General Assembly in 2005 following the Indian Ocean tsunami.

Next March, the United Nations is holding the World Conference on Disaster Risk Reduction in Sendai, Japan, that aims to adopt a revised Hyogo framework.

According to Wahlstrom, “there needs to be a dramatic scaling up of efforts to tackle economic losses resulting from lost homes and jobs, as well as damage to critical infrastructure such as schools and hospitals, public transport, energy supply and telecommunications.”

“There is also a need to continue the strengthening of governance and institutions to manage disaster risks,” she said. “If these don’t work, then there is a reduced chance of making progress against drivers of risk like poverty, uncontrolled urbanization, environmental degradation and climate change.”

In her statement, a copy of which was e-mailed to the Inquirer, Wahlstrom said “this holiday season, we are remembering those who died [in the 2004 tsunami]. But we should also recognize that their deaths have not been in vain and contributed to making the world a safer and more disaster-resilient place.”

Earlier this month, Wahlstrom cited the Philippines’ handling of Typhoon Ruby, saying the government did an “excellent job” of putting into action the lessons learned from Supertyphoon “Yolanda” (international name: Haiyan), which left more 6,300 people dead in Eastern Visayas on Nov. 8, 2013.

She said “all arms of government, including the Philippine Atmospheric, Geophysical and Astronomical Services Administration and the National Disaster Risk Reduction and Management Council, as well as local government units pulled together to save lives and minimize the damage being inflicted by the [typhoon].”

Earlier, Wahlstrom hailed the Philippines as one of the most disaster-prone nations in Asia that has made striking improvements in disaster risk reduction and management.

“Even though Haiyan claimed [more than 6,300] lives when it struck the Philippines, many more were saved because of early warnings and evacuations, particularly in the province of Cebu,” Wahlstrom said in a statement issued during the Asian Ministerial Conference on Disaster Risk Reduction, held in Bangkok, Thailand, in June.