So many tears this Christmas, says Pope | Global News

So many tears this Christmas, says Pope 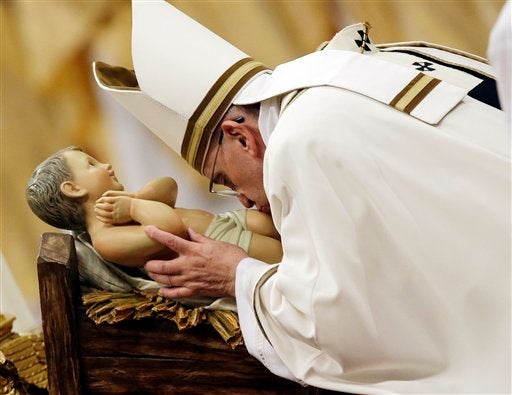 Pope Francis kisses a statue of Baby Jesus as he celebrates the Christmas Eve Mass in St. Peter’s Basilica at the Vatican, Wednesday, Dec. 24, 2014. AP

VATICAN CITY—Pope Francis condemned the “brutal persecution” of minorities by Islamic State (IS) insurgents in his Christmas message on Thursday and urged people not to be indifferent to the suffering of so many around the world.

On a day that brings joy to little ones in much of the world, Francis expressed anguish for children who are victims of violence, including the recent terrorist attack on a Pakistani military school, or those who are trafficked or forced to be soldiers.

“Truly there are so many tears this Christmas,” he said.

Tens of thousands of people turned out on St. Peter’s Square to hear the Argentine Pope deliver his “Urbi et Orbi” (Latin for: To the city and the world) blessing and message, marking the second Christmas since his election last year.

The Pope also appealed for an end to conflicts in African countries, urged dialogue between Israelis and Palestinians, condemned the attack by Taliban militants that killed more than 130 students in Pakistan last week, and thanked those helping the victims of the Ebola epidemic.

But he reserved his toughest words to defend the victims of IS fighters who have killed or displaced Shiite Muslims, Christians and others in Syria and Iraq who do not share the group’s ideologies.

“I ask Him, the savior of the world, to look upon our brothers and sisters in Iraq and Syria, who for too long now have suffered the effects of ongoing conflict, and who, together with those belonging to other ethnic and religious groups, are suffering a brutal persecution,” he said.

“May Christmas bring them hope, as indeed also to the many displaced people, exiles and refugees, children, adults and elderly, from this region and from the whole world,” he said.

The 78-year-old Francis spoke from the same balcony of St. Peter’s Basilica where he first appeared as Pope on the night of his election on March 13, 2013.

“May indifference be changed into closeness and rejection into hospitality, so that all who now are suffering may receive the necessary humanitarian help to overcome the rigors of winter, return to their countries and live with dignity,” he said, speaking in Italian.

On Christmas Eve, Francis made a surprise telephone call to comfort Christian refugees in a camp in Ankawa, Iraq. “You are like Jesus on Christmas night. There was no room for him either…,” he told them.

The Pope has a busy year ahead of him, with trips planned to Asia, Africa, Latin America and the United States.

Another key project for 2015 is the reform of the Curia, the Vatican’s central administration.

In Christmas greetings on Monday to the Vatican’s top administrators, Pope Francis delivered a stinging critique of Vatican bureaucracy. With a report from AP