2 US ships dock at Subic amid row over Pemberton custody 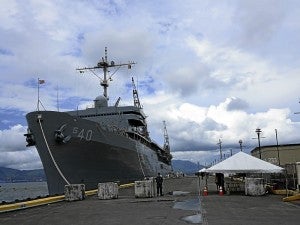 The USNS Richard Byrd and USNS Carl Brasher docked at the Alava Pier here between 8 and 10 a.m.

Some of the civilian crew of the two ships were allowed to leave their ships but were not permitted to go outside this free port, an SBMA official, who asked not to be identified for not having been authorized to speak on the matter, told the Philippine Daily Inquirer.

The official said all military troops, however, were confined in their ships.

The ships will stay in the free port in the next three days, according to the official.

The arrival of the US ships came as the American government rejected the request of the Philippine government to get custody of US Marine Private First Class Joseph Scott Pemberton, the soldier charged with murder for the killing of transgender Jeffrey “Jennifer” Laude in an Olongapo City motel on Oct. 11.

Pemberton is held in a detention facility supervised by the American and Philippine governments in the Armed Forces of the Philippines in Quezon City.

Garcia said business owners in Olongapo City and the free port would have to wait until March 2015 for US troops to return in time for the Balikatan, a major military exercise with Philippine troops.

He said, however, that port calls of other US ships next year might resume earlier than March depending on the progress of the case against Pemberton.

On Nov. 10, the online portal Navy Times reported that Admiral Samuel Locklear, head of the US Pacific Command (Pacom) canceled the liberty (rest and recreation) activities of US servicemen in the Philippines.

The Navy Times cited a statement from Army Major David Eastburn, Pacom spokesperson, that the 7th Fleet officials had to look for other ports where US troops could spend their leisure time.

Eastburn, according to the Navy Times, said US ships could still dock at Philippine ports for repairs, maintenance or refueling but not for their troops’ liberty.

Garcia earlier said nine US ships had canceled port calls to Subic Bay until the end of the year, except for ships that required emergency repairs.

He said the USNS Mary Sears and USS Pecos had requested to dock for repairs recently but their personnel were not allowed to leave their ships.

“The Americans are going to come back, whether you like it or not,” he said.

At least 100 US ships visit Subic Bay every year, records from SBMA’s seaport department have shown. The cancellation of the port calls of the nine US ships came weeks after Pemberton was implicated in Laude’s death.

US rejects PH demand for custody of Pemberton