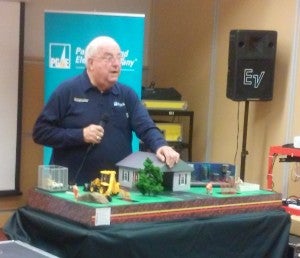 Ron Delucchi brought along his “gas board” to explain how gas flows from the street to the house. PHOTO BY JUN NUCUM

SAN FRANCISCO – Residents who need work done at home that requires digging should first call 811 to prevent any gas or electrical mishaps, a workshop at City College of San Francisco advised.

The workshop at the college’s Mission Center through its Construction Management Program and Pacific Gas& Electric (PG&E) Company schooled residents and students on the hazards of unreported underground work.

A New America Media news report in November noted that “from 1994 to 2013, damage caused by digging nationwide by a third party – someone other than the utility or a contractor hired by the utility — totaled nearly $378 million, and caused 139 deaths and 445 injuries. Significant pipeline incidents are the most expensive accidents – where property damage exceeds $50,000 – and the most life threatening, resulting in deaths and injuries.”

The same report also indicated that between 1994 and 2013, California had 91 significant pipeline incidents, according to federal data, that caused nine deaths and 19 injuries, and more than $22 million in property damage.

Although 911 has been a byword in emergencies, 811 is less known but also has an important role that could similarly save lives and properties. It was established in 2007 as a national call center to help professional excavators and contractors become aware of underground infrastructure for free.

When would you need to call 811? Whether you are planting a tree or shrub, installing a deck or pool, and any field or housework that would need some digging no matter how simple that may be, that job requires a call.

The call center will then alert utilities that have underground infrastructure in the area, including gas pipelines, electrical lines, water and sewer lines and telecommunications cables. The utilities have 48 hours to send out a locator to mark the location of the underground lines with paint, for example, or other visual cues.

These marked lines will then show the approximate location of underground lines and help protect you from injury and prevent damages to utilities, service disruptions and potential fines and repair costs, which are the undesired consequences.

“I do not really have that much time because I have a lot of other things to do. Isn’t calling 811 just an unnecessary delay especially if what will be done is just a simple house work?” is the usual response of a homeowner.

But workshop speaker Miguel Galarza, president of Yerba Buena Engineering & Construction, Inc. warned, “Don’t gamble with your safety — if you’re a professional excavator or a homeowner, smart digging always requires a call to 811. If you have to do some work, even if it just be a simple repair or plant job that would need for you to touch the ground, notify 48 hours before you touch the ground. Make that 811 call and wait for someone to do the markings before you start digging.”

Garza added: “A simple mistake can cost a homeowner as much as $2,000/hour worth of repair work for fiber optic cable.”

Another workshop speaker Ron Delucchi, who has been with PG&E for 37 years, stressed the need for everyone to be familiar with the color-coded markings usually found in the streets and even sidewalks.

The colors and the corresponding utilities are: red for electric, yellow for gas-oil-steam, blue for water, purple for reclaimed water, green for sewer, orange for communication cable TV, pink for temporary survey markings and white for proposed excavation markings.

Utility lines are usually 18-24 inches deep except the sewer (green line), which can go down to 6-10 feet deep.

“Awareness of gas is another important thing we need to know gas lines from the streets sourced underground carries 60 lbs of gas as distribution pressure to individual buildings but only 1/4 lb of the gas goes to the house from the source,” shared Delucchi.

“Any time that you smell gas, shut the main off and once it is shut off, never turn it back on until it has been checked by P G & E for you may still have a leak that may have been accumulated even when it seemed gas does not smell anymore,” Delucchi advised.

For her part, PG&E External Communications Representative Fiona Chan said that they conduct workshops occasionally to make contractors and multicultural customers aware of the services provided by 811.

“Safety does not take a break. We just want to make sure that our multicultural customers are also aware of this service. We always want to increase the awareness level of people on the existence of 811 and gas safety,” Chan stated.

Asked on what may be the reasons for the hesitance in calling 811, Chan observed that people may not be aware of 811, they may not be a licensed contractor/worker for the job, and/or they may be afraid that their immigration status may be unveiled in calling 811.

“In calling 811, they basically do not ask personal information. They don’t ask if you are a legal immigrant or a licensed contractor at all,” Chan assured. “Always call 811 before you dig. It is a free service number with nothing to fear.”

Another reason advanced by Galarza is complacency of the digger that he is not going to hit anything anyway so there is no need to call, which is usually dangerous.

Should an accident happen due to failure to call 811, Galarza warned that contractors or homeowners may not be able to get insurance for repairs and they will spend a lot money as a result. Homeowners are also responsible for the injury to the laborer that would be reflected as a liability to the homeowner’s insurance.

He also emphasized that 811 is not an enforcement group. Unsafe excavations should be reported to the Occupational Safety and Health Administration (OSHA), which has jurisdiction over such cases.

As a parting message, Galarza, Delucchi and Chan advised those intending to do some digging not to hesitate to call 811.

“Make sure you can sleep at night and cannot hit anything that can do damage for you and your loved ones.”